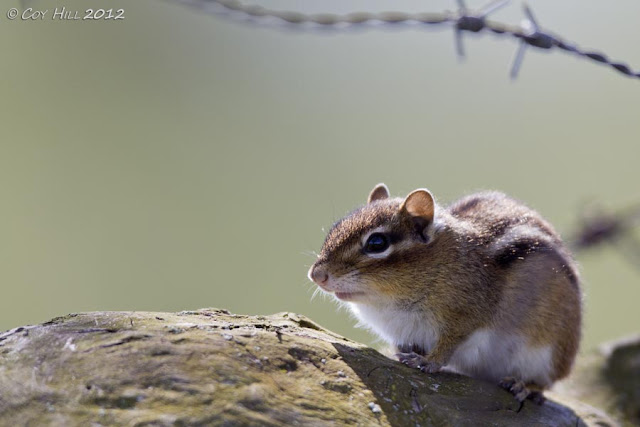 With wildlife all around us even a short walk down a country road may result in capturing some memorable images.  With a little time to kill well after sunrise I tossed the camera rig over my shoulder heading to see what I could find.

Locating this chipmunk sitting motionlessly in the roadside fence row I compensated the exposure slightly to bring out the detail in the chipmunk.  After processing I decided to crop leaving a strand of barbed wire in the photo to tell the story of finding the chipmunk using the fence row habitat as home.  Overgrown fence rows are important habitat for many farm land species but with modern clean farming practices they are becoming a thing of the past. 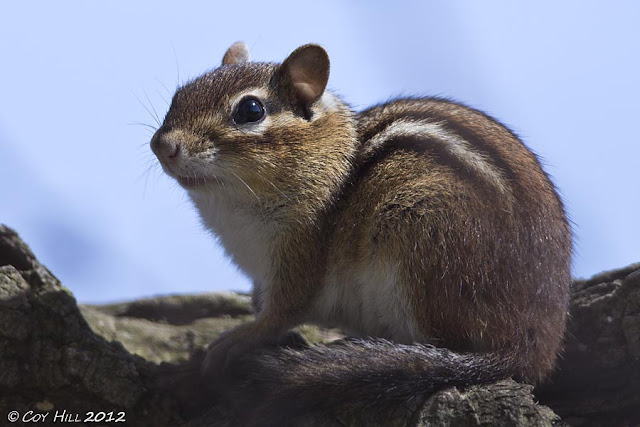 Moving to the other side of the tree that the chipmunk was sitting near, at first I didn't think a photo would be possible.  Looking closer I found one small hole I was able to shoot through giving me this close-up photo of the alert little animal. 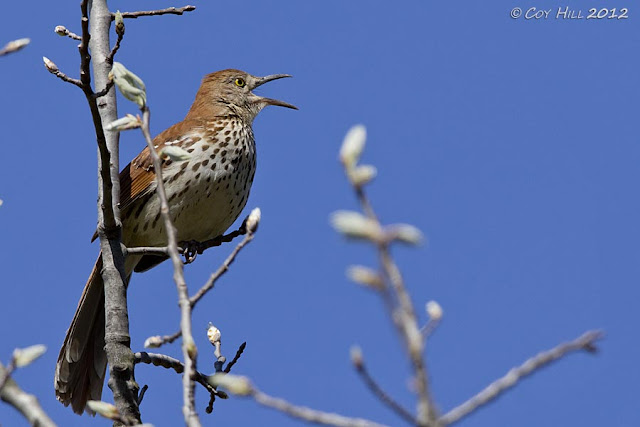 Walking on down the road I noticed a back lit bird silhouetted singing from a tree top.  Think that it was probably a mockingbird based upon its shape and the variety of bird songs it was imitating I was surprised when I passed around to its sunlit side to find that it was a brown thrasher.  Brown thrashers spend most of their time in heavy cover, however during the nesting seasons they can sometimes be found singing from the tree tops. 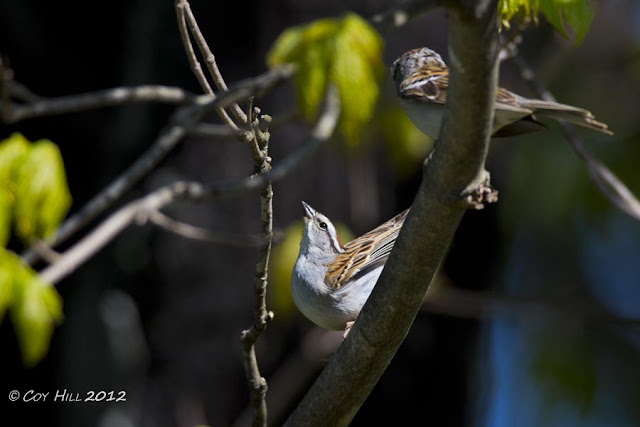 And last but not least were the chipping sparrows.  These little birds were creating quite a stir.  Whatever the cause, breeding activity or territorial dispute the sparrows were in quite a flutter.

Wildlife is particularly active during the spring and many species can be found on just a short jaunt.
Posted by Coy Hill at 5/01/2012 08:59:00 PM

Beautiful captures. All of God's creatures are beautiful,even the simple Chipping Sparrow.

Love the Thrasher. I'm in a class right now that asks us to learn all native flora and fauna and to be able to ID...we just did the Thrasher!

Beautiful images, as all of yours are. Love the chipmunk. We had a couple of them in our wood pile a few years ago and they drove the dogs nuts. Great little dog exercisers. ;)

Fantastic! What a treat. Love the wood thrush singing (at least I think that's what it is)...

Delightful images! Our own backyards are often the very best places to see wildlife. While I realize not everyone is likely to have creatures like moose wander through their yards, even someone living in the city can see birds and insects and squirrels, if only they take the time to look. Where you live does play a large part in what you see. For instance, I won't see any chipmunks or brown thrashers or chipping sparrows.

Elaine, you right of course that you won't see these critters but I would LOVE to seen a moose wander through my yard:) but it will never happen!

Great images as usual, Coy! I love the Thrasher photo with that brilliant blue sky in the background. Your walk was incredibly productive! I've been getting out in my backyard to sit in my blind a little but still have a long way to go to perfect my bird images!

That first shot is cracking Coy. The bokeh is just perfect and the squirrel so cute ;-)

Beautiful shots, Coy! There's so much going on in the spring that we just don't know where to look next! Good work.