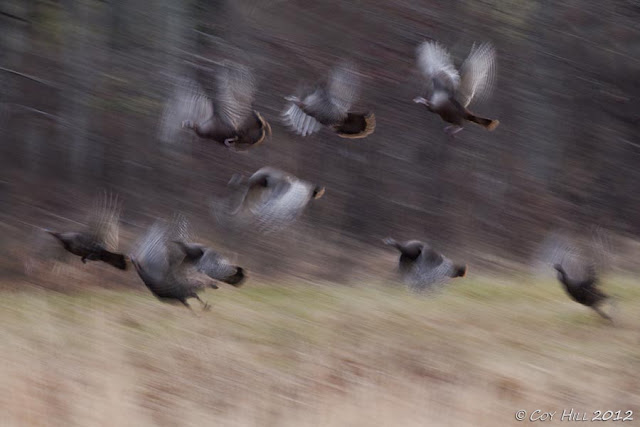 Wild Turkeys in Flight
A flock of wild turkeys were feeding along a meadow edge under heavily clouded skies as dusk settled over the landscape.  The light was such that decent photos were out of the question so I was standing idly by paying little attention to my camera settings.  When suddenly the flock took flight I was forced to shoot with the settings previously dialed in as there was no time to make changes.  The camera was set on ISO 400, with the auto exposure cranking the shutter down to 1/30th for this shot.  While if I had had the time to make adjustments I would have selected a higher ISO, I actually like the way the action is depicted in this shot. 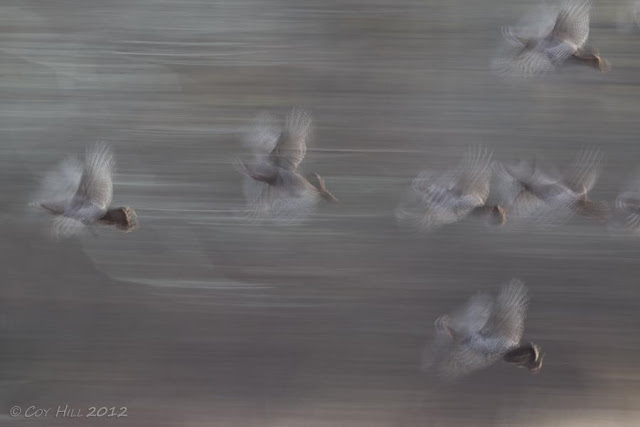 As they birds rose higher against the background of trees the shutter speed dropped to 1/10sec. capturing even more motion blur.  The first shot is my favorite.  Which do you like best?
Posted by Coy Hill at 12/22/2012 12:50:00 PM

I know you would never take an unfocused shot,if possible,but these are really neat. Sometimes we get these unexpected surprises. Merry Christmas.

Hard to choose - I like the second one though.