A Steady Hand in the Storm 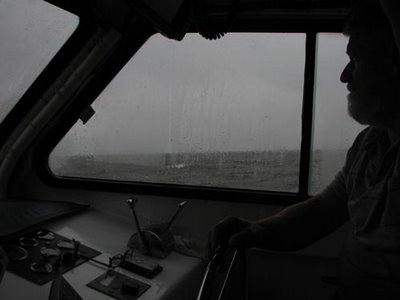 This image was recorded during a spring trophy striped bass charter. Each spring I along with a group of my friends go on a catch and release pre-season charter in the Chesapeake Bay with Captain Hank. He has taught me most of what I know about catching stripers.

On this particular day the weather forecast was far from favorable but to my surprise Hank did not cancel. Upon arrival and finding it to be completely calm I ask Hank what he knew about the bay that the weatherman did not. He stated they had SE winds forecast to become NW and when that happened the water would lay down for a while. He also said “it will blow up after while”. We had an excellent morning catching many nice stripers to 30lbs. Near 10:00 am it began to rain lightly. Another half hour of fishing and we noticed the sky becoming very dark to the north. Hank came back and told Greg ,the mate, to bring in the lines. All hands fell to the job as a fresh wind began blowing from the storm. Buy the time all lines were in the waves had built to three feet. As Hank began the run to port the wind steadily increased until very high waves were crashing over the roof of his boat. If I had been caught in this storm with my boat it would most likely have ended in disaster. With a steady hand Hank guided his vessel safely to dock. Just another day in the life of a Chesapeake Charter Captain.
Posted by Coy Hill at 8/09/2006 03:20:00 PM