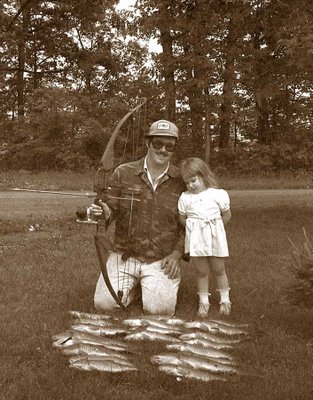 Since the last post concerned the sport of hunting, I thought I would continue with the theme but with a different twist. In the late 1970’s and early ‘80’s I gave bow hunting a serious try. I became quite proficient with shooting the bow as evidenced by this photograph taken somewhere around 1983. This was the culmination of a morning shoot at nearby Raystown Lake. The carp were spawning in the shallows and with a careful stalk I was able to approach within bow range. My oldest daughter is accompanying me in this photo. She is now grown and is the proud mother of our grandson Sage, featured with the pink umbrella in a previous post.

After a few years of shooting I put the bow away as the heavy shooting regimen was beginning to damage my right shoulder causing nearly constant pain. Also I found my recovery rate while deer hunting was unacceptable. As a hunter I believe if one is going to attempt to harvest an animal he should do it in such a way as to inflict the least pain and suffering as possible. I simply can not justify the suffering which accompanies wounding an animal. Thus I quit bow hunting and use only firearms.

Thats a nice mess of fish there. A lot of my family are hunters and my husband would be interested in your muzzleloader. I am not a hunter and I appreciate your not wanting to cause suffering to an animal.

Hey, thanks for the visit and the great comment on capture! I like your post here, preserving and sharing photos from past years is special. I'm sure to be back for another visit!

Allthough I myself couldnt hunt (ironic becasue I do eat meat) but my father and grandfather were avid hunters. I recall Bambi being my favorite movie then to see "him" hung from a tree bleeding.. I'm all over that now and I respect hunters...Its all a natural cycle look at how we origionated, thus we (meat eaters) need to realize the animals we consume were uhhh "killed" by someone. I respect the fact you use the least pain for a kill and I do realize it indeed takes mastered skill.. something I do not have. Ok enough rambling...This shot is great for alot of reasons but my personal one is the little girl in the picture it reminds me of my Papa and me. I always love viewing your photos and words and allthough hunting is not for me I admire the skill it takes!

Thanks for all of your nice comments.

Luce, I’m back!!! I have just survived a major pc problem and had to format the drive and do a complete install. It was my first time and it was nerve wracking! It was successful and the next time will be a piece of cake<

Kimberly, thanks for your candor. Hunting is not for everyone and some that do shouldn’t. Some will not take the time to hone their skills to a reasonable level of competency.

Hi Salty Dawg, I'm like Kimberely and am not very fond of hunting, perhaps its because I've never been around it, but I also appreciate your skill and thoughtfulness. The family photo is so tender. Its a momory builder.