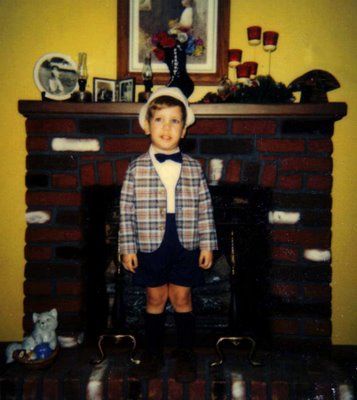 Pictured above at the age of three
It could have been termed the World Championship since it was conducted in a forum open and accessible to the entire world, but maybe Luce has that planned for a later date.

Your new champion is a very deserving young man. I have never considered him a nerd, but he certainly does have a humongous vocabulary of nerdy words! Like many of us he reserves them for those “special occasions” where they most certainly will get a laugh. He is the number one fan in the Napoleon Dynamite fan club.

He came into my home at the age of fifteen. This is an age at where many young folks are difficult to deal with in a stable home let alone moving into an entirely new family situation. Chad was not! He quickly became the son I never had. I can’t say we shared all common interest because we didn’t but we never let that stand in the way of becoming a family. Chad did take some to my fishing but hunting was never his forte. About as close as he came to hunting was eating Bambi. Which I might add was done with gusto!
Maybe he will take up hunting some day, hunting ligers or wolverines!
Posted by Coy Hill at 10/19/2006 02:34:00 PM

Awww...look at the little champion...the knee high socks and the bow tie rock! Heehee
Cool post, Salty! You're right--it should have been the International Championships because we had a Canadian participant. So really, Chad is the Champion of the World!

Great tribute to family. I think I have a picture just like this of my son at that age. Nerd or not, you can be very proud of your son Chad.

This is a sweet and funny post. We all have those uncool but wonderful photos from our childhood or when our kids were young.