When I was growing up our family’s way of spending Thanksgiving was different than most of America’s although not uncommon here in rural Pennsylvania at that time.

Thanksgiving was hog butchering day. I remember our family butchering on Thanksgiving from when I was a small child, too young to help. We continued the tradition until my Grandparents passed away in the mid ‘80’s. Granddad and Grandma would purchase pigs at the livestock auction in the spring. Raising the pigs was Grandma’s project. She would feed them a wet feed mixture twice daily along with corn on the cob. The weeds we pulled from the garden would also be carried to them. They would grow quickly and by Thanksgiving would normally weigh 225-275lbs.

When we were ready to begin Grandma would go in the house and turn up the radio so as not to hear the shots or the squeals if the shooting should go awry. Grandma’s attachment to her hogs ended once this part of the task was completed. Being the sturdy farmwife, she viewed the processing of her pets into the winters meat as just another part of life on the farm.

We actually did the butchering as a two day operation, Thursday we killed, scalded, scraped, hung, and gutted. Friday was reserved for cutting meat, grinding sausage, cooking lard, and applying the first of the sugar cure to the hams, shoulders, and bacons. Mom would refrigerate the sausage keeping it fresh until deer season the following week. She would always count on her successful hunters to provide venison burger to mix with the sausage and increase the lean content. 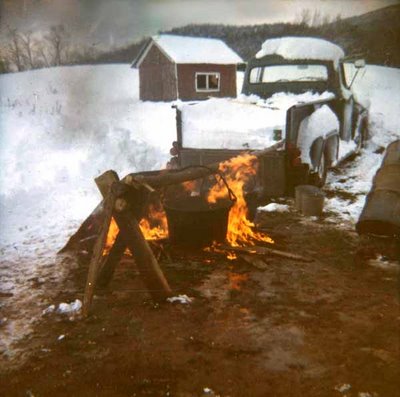 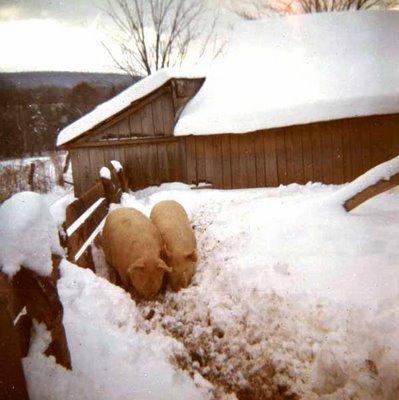 Pork, soon to be made table ready

With Thanksgiving being a very busy work day our family always postponed the traditional feast until Sunday. My brother’s wife continues this tradition, although we now call it the pre-Buck-season dinner. As for the butchering, I alone continue this tradition by purchasing a slaughter hog from market each winter. This year, as in past years since my mothers passing, my father will spend the day with my wife and I, and yes, we will have the “traditional” Butterball!

These photos were taken the Thanksgiving of 1971.
This was the only time I can remember that we had a deep snow to butcher in.

Wow! Hog slaughering on Thanksgiving! I can't tell you enough how fascinating your posts are with all the history you provide along with the photos. So much of what you share is new to me and I love to learn about it.
HAPPY THANKSGIVING SALTY!

Yep--I just proved how little I know with that comment about hog "slaughering."
Slaughtering, or butchering, is what I meant. ;-)

Thank you for sharing a slice of your life from your younger years, I enjoyed reading very much.
xoxo

When I came into your life in my mid teens, I definitely was educated on a lot of stuff I didn't know before. I remember when you picked back up "butchering of the Hog". As I waited on the school bus that morning, I peeked into the shed after the hog had been slain. I'll never forget the "red walls".

The pork you usually had on hand was good, but the venison was always my favorite.

Happy Thanksgiving and thanks for all the kind words you have posted at my site over the past few months!

I love that story! When I was young and my dad butchered a pig I would go to a friends house miles away so I wouldn't have to hear the squeeling. Same thing when he killed chickens.

Lucy, I’m glad you enjoy reading my post, its always good to know your out there in Sac checking up on Pa.

Susan thanks for visiting and for your nice comment.

Chad, yeah man! You were the unlucky observer to my biggest butchering fiasco! As you know I now use a killing pen to keep everything contained.

Bill, thank you. I enjoy your blog very much, it is a must see every day.

Faye, seem like you and grandma had one thing in common!

Absolutely fascinating. That's so out of my frame of reference. Thanks for sharing your slice of life.