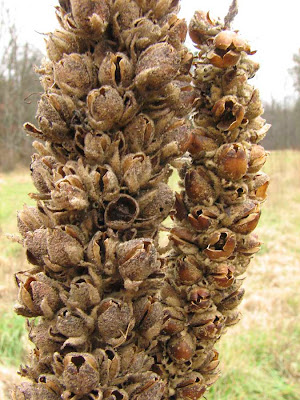 The Mullen stands alone in a field. It’s pretty yellow flowers are long past, the leaves which once were a greenish gray are now brown. Where flowers once bloomed, now only dry husk remain. This Mullen has served its purpose; the seeds of a new generation have been spread.

The Common Mullen is an interesting plant. It is a biennial, the first year it grows only leaves, then flowers and dies the following year. I have learned of a study began in 1879 where seeds were placed in jars of sand and buried. They are dug up and a few planted every twenty years. The Mullen seed is one of the few varieties that continue to germinate well over a century after having been collected.

Before we grab the hoe to remove the next Mullen we find in our garden, perhaps we should stop to consider that just maybe the plant that produced this seed grew in the days of our Great Grandparents or before!
Posted by Coy Hill at 12/11/2006 04:32:00 PM

Funny Lucy...Thanks for the botony lesson Salty. I never heard of a Mullen plant before. Is it only an East Coast plant?

I haven't heard of one either. I take it its a weed. And a hardy weed at that.

Cute Lucy :-) and by the way, we are ready for an update on the Mullet!

Faye, Photowannabe, I do not know if the mullen grows on the west coast but it is very common in the eastern US. Maybe the next post will help answer you questions.

Thanks for your blog on the mullen. We have one at the end of our street here in Portland, Oregon. My sister, from San Diego, California, has them too. So yes, they do appear on the west coast.