Jacklighting, Tools of the Trade 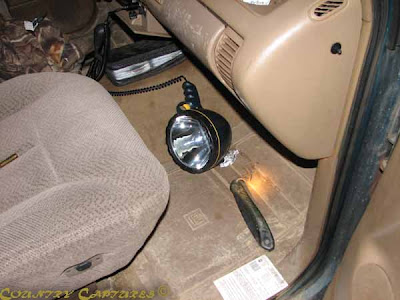 For those unfamiliar with the term, Jacklighting is the act of unlawfully shining a light on an animal in an attempt to kill it. While spotlighting (the act of shining a light on wildlife) is legal in Pennsylvania within certain hours; the possession of weapons capable of killing game is not, with few exceptions.

As a young Deputy Conservation Officer I was assigned to work under a District Officer who had came to the conclusion that jacklighting was to be our major focus. He reasoned that jacklighting; while very prevalent at the time was a socially unacceptable violation and one we could do something about. At the time we were a force of nearly a dozen officers with a county of four hundred square miles. By concentrating our efforts in a particular area on any given night we were able to increase our odds of apprehending jacklighters significantly. The following is a short story about one of the more unusual apprehensions from those early years.

Thanksgiving had just passed and our rural county was experiencing its annual population increase as hunters arrived. As some hunters cannot wait until the season; we officers were working patrols all throughout the nights. On this particular night a fellow officer noticed a vehicle spotlighting after hours along a secluded forestry road that follows a mountain top for many miles. As he could watch the vehicle’s progress from his vantage point some ten miles away; we decided that I would attempt to get into position for the stop. I knew it was a long shot as I had many miles to cover so I felt no need to hurry.

Time flew by as I traveled the country roads and some forty five minutes had elapsed by the time he informed me that I was getting near. The suspect’s vehicle had been moving south the entire time and as I had entered the south end of the road a head on encounter was about to ensue. As I needed to observe the spotlight coming from the vehicle prior to the stop, I pulled over and shut down.

In a few moments I could see their vehicle slowly approaching as they shined the spotlight into every nook and cranny in their attempt to locate deer. I can imagine their surprise when their night took a turn for the worse as I activated the red lights.

Soon the incident was under control, they looked on in astonishment as I removed the loaded rifle that had been between the two occupants, along with their spotlight. They had felt secure in this remote area while they went about their deadly task. Little did they realize that what appeared to them to be heavy forest along the road was only a thin screen of trees that allowed an officer, miles away, to follow their every move as they searched for a buck.

Neither could they have imagined that I had traveled twenty two miles, much of it over back country roads, to be in position to apprehend them.
Posted by Coy Hill at 12/13/2007 09:05:00 PM

That was an interesting story!

WE call that "shining" here & it's NOT legal. Mama has had a hard time with "Shiners" at her house. They have a field right by the road & Tony (My step-dad) has heard them shoot many a night into it killing deer thats grazin in their field. Over the past 10 or so years DNR uses a dummy deer down here. They stage him in a field somewhere & wait for "Shiners" ......the deer has a name & for the life of me I cant think of what they call him right now for love or money! (I worked 17 hours yesterday, maybe I'm sleep deprived). It's a famous name darn it! Anywho...it works in bustin "Shiners". And down here they can take your guns & the vehicle your hunting in.

He's called "DIRTY HARRY"!!!! I finally thought of it after one cup of coffee!! LOL! I dont know how many they have in the state but they are deer from the taxidermy with NICE RACKS & a shiner cant resist! We get a magazine called Georgia Outdoor News & it has a section called "Hall of Shame". It always has some interesting stories. Some of them idiots will shoot the deer several times thinking they missed! LOL! Go directly to JAIL! Do not pass go & do not collect your deer meat dummy!

Kuddos to you, Salty.

I almost never use the automatic settings. I set things myself in most cases. I did in these shots too.

Interesting story Salty. I didn't know there was so much intrigue in the hunting business.

We call it “Spotlighting” Bottom line illegal and UN sportsman/woman like.

That was a night to remember. It almost seems impossible now that we ever did that.

The dim moonlit cloudy nights in late November, with the spotlights reflecting from the clouds. We looked around us at the pickup trucks with the red lights and decals and looked on our shoulders at the insignia. We were the great Pennsylvania Game Commission, and action was almost certain before our shift ended!

We were the law enforcement presence in Fulton County from 11:00 at night until dawn!

Times changed, slowly our authority was eroded and the glamor left. One day we were old men and it was time to choose another path in life.

Who knows where to download XRumer 5.0 Palladium?
Help, please. All recommend this program to effectively advertise on the Internet, this is the best program!

who really cares if someone lights a deer deer they just create problems for insurance companys and motorists. the tags someone gets accounts for a deer who cares where or how they choose to fill it. its a waste of tax money and a waste of police time their are more serious crimes being commited in the usa someone shooting deer after dark is a pety thing to waste time and money on.

i forgot to add something it is illegal as well to deseve someone. and always enjoy the story of the man who sued minnesota game authority and won 10,000 dollars for their use of fake deer to deseve him into shooting. deception is the lowest life crime in the world especially in a marriage. why would law enforcment want to use low life and illegal tactics