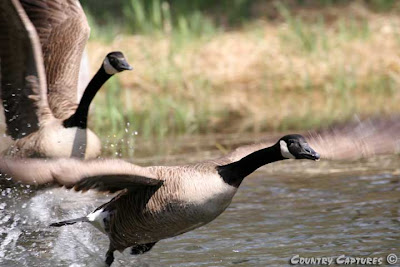 Sometimes it works and sometimes it doesn’t; this time the flushing shot was completely successful.

I first saw these geese as I rounded a point that opened into a small cove. The geese swam into the cove to avoid me and my boat. The wind was blowing into the cove so I allowed it to push my boat towards them with only minor direction adjustments with the trolling motor. As the boat neared the geese they became nervous and I readied the camera for the flushing shot I knew was coming.

The cove was very narrow with high trees on three sides so the only path of escape for the geese was to pass by me very closely. I considered attempting the shot at 200mm to 300mm as this would make framing the action much easier but decided to risk it all and keep the lens set at 400mm and either get a stunner or nothing at all. I used an F8 to give me some DOF. I hoped the 1/400th shutter speed was fast enough to give a sharp image while still allowing some motion blur.

This time it all came together!

Spectacular! Isn't it a good feeling when it all finally does come together? Makes all the waiting worth while.

Nice shot. I suppose the noise was terrefic.

Salty: This is one super capture. I need to get a better understanding of these setting. I use automatic too often.

Great shot. They usually flush "AWAY" from you, so this is really fantastic,

Terrific composition and action. I like how you got the couple in perfect lift-off.

This one captures the moment very well.. like Abe mentioned I could hear the noise...
Tom

It came together so well, that is an amazing photo.