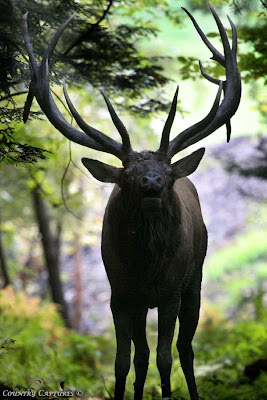 Arriving in Benezette Pa and meeting up with Willard at 5:30 am Wednesday morning I was excited about the possibilities that this years elk rut held. Driving up Winslow Hill in the predawn darkness we passed a group of elk watchers gathered along the road looking at some elk faintly visible through the foggy darkness. A quick look with binoculars revealed only cows so we continued to where Willard had encountered action the evening before.

Nearby bugling could be heard as we readied our photo gear and walked to a food plot where a large herd bull was watching over a band of cows and calves with a couple of raghorns nearby.

The elk left the food plots while it was still too dark for good photography. As the morning wore on we followed the bugling and located the elk activity deep in the woods.

At least two large herd bulls were present as well as a number of lesser bulls. The morning activity consisted of the herd bulls running off all challengers and on occasion attempting to intimidate each other while at other times laying down to catch a moments rest.

The incident pictured here occurred when Willard & I decided to leave by way of an old railroad bed and met this mature herd bull coming our way. After seeing us he continued to walk towards us until he was only a few yards away before veering off the path. Passing closely to our right he headed towards the bugles of a satellite bull crashing through the brush as he attempted to steal a cow or two out of the big guy’s harem.

That is one huge animal! Great shot... and I hope it was taken with a zoom lens! ;)

Huge animal with a big rack of horns.

This is amazing.It sends chills up my back to think you were that close to this animal.
Blessings,Ruth

Kind of a scary encounter! The image depicts that.

I would like to join you guys on an adventure shoot sometime.

You and I will definitely need to do some "birding" next time you come down here.

What a sight that must have been... a great pose it is striking

That's an amazing capture! They are just so beautiful.

Wow! What a shot! So glad to hear you had a great time. Like I said before, thanks for sharing images and stories of this time we are missing in Benezette. It's almost like we are there. We look forward to more photos!!

Wow! This is a stunning photo! I'll bet your heart was pounding as he kept coming towards you; on the one hand wanting him to come closer so you could get a better shot, and on the other hand thinking that's close enough, please don't come any closer.

This is a nice photograph and I can just hear them bugling.

What a majestic figure he cuts!

What a shot Coy! Gosh he is very impressive... I can feel what you felt doing such a shot. Man, it is an incredible picture!

Thank you for visiting my 'trees' post. All I can say about this post is WOW. I also visited Willard's post and another WOW. My daughter moved to central PA and we take the ride from Buffalo to PA and I am amazed at how much beautiful undeveloped county there is. I can't wait for the fall leaves as I am sure that will be stunning. --Michelle--

Fascinating! I would have loved to be there! The story is one I wish I could tell, but Illinois is not Elk country. Sigh...

This is amazing.It sends chills up my back to think you were that close to this animal.