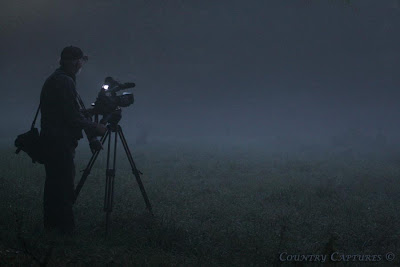 My attention is usually riveted upon the wildlife we are pursuing. Sometimes I must remind myself to take advantage of other opportunities.

Such was the case Friday morning as Willard set up the video to capture the sunrise as the first rays of light began to wash over the landscape. I was totally unaware of the two cow elk bedded in this photograph until I loaded this image in Photoshop 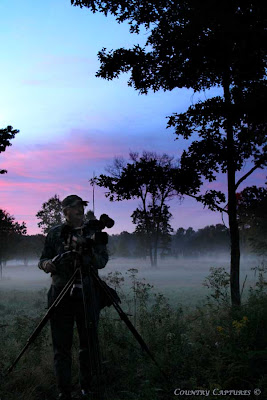 A few minutes later as the colors in the eastern sky developed I captured this image of Willard facing away from the sunrise and towards the sounds of an approaching bull who was bugling as he came.

Very neat images. Before sunrise is such a great time of day in Benezette. I like the morning fog.

Beautiful shots! It's easy to get focused on taking shots of the wildlife, but sometimes the best story is behind the scenes.

Both these photos are terrific. Love the sunrise behind Willard.

Hallo Coy, I just want to say that I enjoy your pictures very much !
Greetings from Austria/Europe !

Hi Salty...
I think these are excellent shots in deed.. and ones for the family treasure box... box are great shots on their own merit but to have caught your brother so well.. twice is just great.
ill you also pass on my thanks to Mrs Salty, she left me a beautiful comment concerning my grandchilden...

If you didn't hint at the cows being there, I would have missed it. Had to click to see. What a great image!

Beautiful shots! It's easy to get focused on taking shots of the wildlife, but sometimes the best story is behind the scenes.