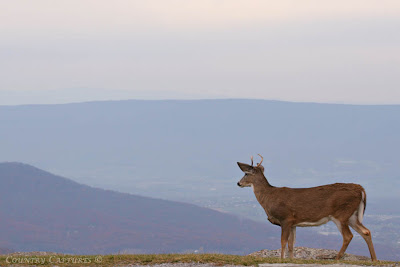 Appearing much like a tourist, a small whitetail buck enjoys the view of the Shenandoah Valley from atop a high mountain scenic overlook.

While slowly driving along Skyline Drive on the lookout for large bucks Andy noticed a couple of young bucks at one of the many overlooks.

Normally I would have passed by these little guys without a second thought but with the picturesque valley below I wheeled into the parking lot hoping to capture a shot with the bucks as a foreground element. Racking the 100-400mm lens to its shortest length, setting the aperture to F9 to gain increased depth of field I began shooting. When this buck came to attention looking out over the vast expanse of the valley below I knew I had captured “The Shot” and was content to fold up the tripod and move on.

Wow-that IS a great shot!

Wow yes this is a gorgeous shot with this nice view and atmosphere. You better stop in this case... Congrats!

Yes indeed, you did capture a special moment. Nice composition. I like this photo a lot. Thanks for sharing.

Beautiful capture! Love the light and the buck's pose.

Coy, it was great to meet you and Andy in SNP. You guys left the right day as each day got worse, but I stuck it out. I never said I was very smart.

Great photo's from that day. I need to look at the big picture and quit thinking close ups so I don't constantly miss out on photos like these. Of course when you go someplace like this for the first time you get a little overwhelmed with all the whitetail.