Arriving at Big Meadows, Shenandoah National Park, in the predawn darkness Willard and I were greeted with gusty winds and subfreezing temperatures; perfect conditions for the Whitetail rut. Our expectation for the morning's shoot ran high but not high enough to keep the chill away as we readied the photography gear. 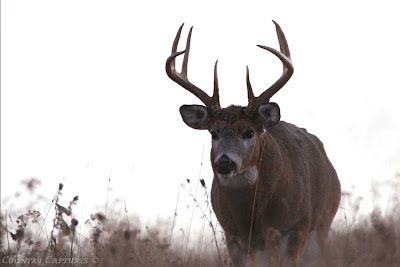 Our first encounter was with this fine eight point buck at the lower end of the meadow. With the buck on the skyline I overexposed this shot 1.3 stops to capture detail. 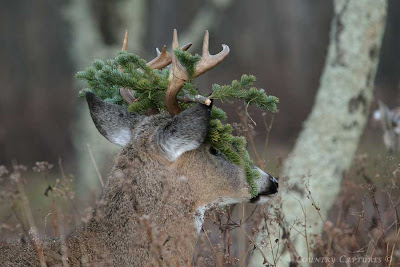 While photographing the nice 8pt buck that had moved into the woods following the previous shot, this smaller buck approached from behind. Apparently he had just given an evergreen a good thrashing as he was still carrying a branch lodged in his antlers.

While photographing him I could not help but chuckle to myself wondering if he had added the evergreen bough to his head gear to increase his sex appeal or if he were wearing it as camouflage to hide from the big bucks.

Fantastic shot, you both got some great photos!!!

They are both great shots, the second one made me giggle.

What a cool photo Coy, I will go along with your first sugestion. If I was a doe I would find that very sexy.

After looking at yours, Willards and Ken's sites I can't wait to get there on Tuesday. I just hope I can get myself to leave on Thursday.

Both great pictures, but that second one is worth a giggle or two. ~ Calico Contemplations

That second pic is priceless!

Salty: Love that second shot with the youngster in full head dress.

Wonderful shots! Love the second one. He's probably saying what do I do now??