Thoughts on the Pennsylvania Elk Hunt 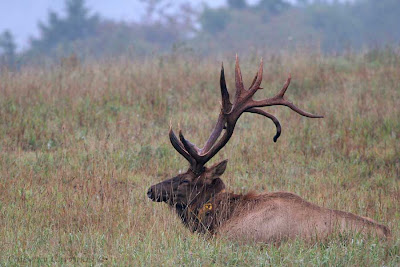 Bull #36, AKA Fred or Fred Jr. resting during the recent breeding season


Many wanted to hang his head on their wall when he was in his prime even though he had absolutely no fear of humans and was the main tourist attraction at the time.

Not hunted for over seventy years the elk hunt began anew in 2001. In the late 1990’s the then executive director of the Pennsylvania Game Commission pulled out all of the stops in his attempt to establish the modern day elk hunt. I recall a statement he once made that if we didn’t establish a season soon that it may become impossible to ever have a hunt. This was done at a time when elk tourism was building rapidly and I concluded from the statement that if the commission did not act quickly that those who consider the elk a state treasure to be preserved and viewed would prevail.

In regards to my previous post one commenter mentioned “follow the money” so bear with me for a moment while we do just that.

"Pennsylvania’s elk herd is the eastern most free-ranging herd in the United States. The herd attracts thousands of wildlife watchers each year. During 1987 an estimated 7,200 recreational visitor days (RVD) and $11.85 per day per viewer were spent by the public viewing elk in Pennsylvania (Shafer and Wang 1989). The economic value of the viewing experience; i.e. the amount the public was willing to pay, was estimated at $147,096 (Shafer and Wang 1989). The number of visitors traveling to Pennsylvania’s elk range has increased dramatically since 1987. It is not uncommon to see 1000 vehicles per weekend day on Winslow Hill, during the fall rutting season. Winslow Hill is the PGC elk viewing area because of the increased likelihood of seeing elk compared with the rest of the Elk Management Area. In 1997, Penn State University reported 76,000 visitor days with approximately $17.11 spent per day ($1.3 million total) (Strauss 1999). This figure has likely increased since the study was conducted. The influx of tourists within the Elk Management Area has benefited the local economy through lodging and meal expenditures, and the purchase of fuel, groceries, and sporting goods. "

Their can be no doubt that the number of tourist visiting the elk range has increased since the latest study over a decade ago and that the economic impact is much greater now. Speaking from personal experience it is difficult to get by today on less than $100 per day when one considers meals, fuel, and minimal lodging.

Some hunters retain a local guide which ups their cost considerable. Hunters also require meals and lodging for the duration of the hunt which can last up to six days.

Compare that rosy hunt economic total to the tourist generated value from 12 years ago of $1.3 million.


There is no doubt that the elk management is not a choice between ecotourism and hunting but rather a reasonable balance between the two. Pennsylvania is currently attempting to have its cake and eat it to by killing the same mature bulls that are being promoted to draw tourist dollars to the area.

For those of you who may not know where I stand on hunting, allow me to state my position. I have hunted since I was old enough to tag along behind my grandfather. That has been over four decades now and I continue to participate in consumptive hunting although to a much lesser degree since my interest has turned to hunting with the camera.
Posted by Coy Hill at 11/05/2009 06:40:00 PM

Hi Coy, An amazing post. Never really thought of the ecomonic side to hunting before.. Hmmmmmm..... Well just wanted to say HI and that you have so many wonderful images that I have missed in the past few months. Glad to see you are still here posting... Aloha, Renee :)

As someone who has participated in 'field sports' here in Britain in the past I have defended hunting many times. BUT I don't think that it's particularly right to kill something just to hang it's head on my wall...

So nice to see a photo of the world's greatest elk.
Very well said....they kill the same bulls that they use to bring tourists to the area. Many people would not like to hear that the elk they enjoyed seeing and photographing was killed. People want experiences over time (example: Fred Jr.). They want to see the same elk each time they come to the area. It's fun to document their growth and habits over time. Going to Benezette would not be the same if we didn't put our focus on finding Fred. With the killing of all of these monster bulls, there will never be another "Fred Jr. situation" again, and that is very sad.
Don't know if I have my numbers correct, but I've heard that Benezette has 70,000 visitors a year. Plus add in the residents. There is no way around these elk becoming people-friendly with so many humans around them all of the time. It is not right to turn around and kill them. So many people keep coming back (and spending their money) because the elk are so tame. Those areas should be no hunt zones so that this relationship (and dollars coming into the area) can continue.
I also think collared elk should be off limits for two reasons:
1. They spend time and money to put the collars on, plus checking their health and progress.....isn't that money thrown down the drain if they just turn around and kill them?
2. If the elk with collars would be off limits, then tourists could enjoy elk which they know will be safe and "viewable" year after year.

I like your choice of words for the hunting you do...consumptive hunting....Never thought about the financial side of the hunt before. Very informative. Fred or Fred Jr. is a magnificient beast.

For those not fully understanding PA's Elk Hunt. There are designated Hunting Zones. Those zones 'do not' include the area around the heart of Benezette. So to answer one of the above comments. Those elk seen routinely around town, like Fred, are not in a zone that can be hunted. It's not as easy as you may think. Elk wild animals and each year out of the small number of license, some go unfilled. Our herd is a tremendous natural asset, management is a necessity.

I must take exception with Im Clyde's comment. Yes there are designated hunt zones and of course it is true that there is a small no-hunt zone but certainly not adequate to protect the bulls that frequent the popular viewing areas. As for Benezette, just check behind the store where the border of hunt zone 8 begins. Do you really believe that Fred would never walk across the creek?

As for these animals being difficult to hunt, I will not argue about the wariness of bulls well away from the no-hunt zone but I will site statistics, since the modern day hunt began in 2001 antlered elk hunters have enjoyed an average 90% + kill rate with 100% kills in three of the eight years. Difficult hunt? Who is kidding who?

To further illustrate Coy's point, all that Fred or an other elk has to do is be on the side of front street next to Trout Run and it is in the Hunt Zone, although of course the safety zone issue takes care of that in Benezette proper.

To Quote the current hunting Digest in Part, the boundary between Hunt Zone 2 and the No Hunt Zone is: "Beginning at Benezette then north on Front Street and continue to use the “Coal Haul Road” to the double gates at the parking lot at the head of Porcupine Run."

In 2006 an attempt was made to put the entire lower end of Winslow Hill to Young Mark Road at the Dudley property in the Hunt Zone also, but the decision was reversed after vigorous, and sustained public outcry.

In the scheme of things Benezette itself is but a small issue. The bulls that use all of the viewing areas on Winslow Hill need more protection, and thankfully the PGC saw fit to take steps that did help to a large extent this year, with the elimination of the combined hunt zones. Now we just need a little more space so that bulls like the 9x8 may survive.

Management may be a necessity, but the targeting of the large bulls that frequent the viewing areas is not.

Very well said Coy and Willard. I also understand about management, but killing healthy, monster bulls only from a trophy perspective is wrong, and it will hurt the herd in the future.
I have heard that there are "wild" elk in Medix Run. The 9x8 was not wild in any way except for the fact that he was able to run free. Killing him was wrong and heartless, and no one will ever convince me to believe differently.

Very interesting, and a beautiful photo.

Kudos for your well prepared post Coy. The numbers you bring forward in your post along with the follow up comments by both you and Willard continue to prove the point about the Elk hunt and areas Elk are hunted in.

I am not against hunting Elk although I would never hunt them, but I am against some of the areas Elk are hunted in.

I do beleive away from these areas hunting Elk is much more difficult and like hunting them our west. But when bulls are taken that we know in the areas that are just to close to the viewing areas no difficulty is involved in shooting this animal. It almost reminds me of shooting them in a zoo.

It is just to bad common sense is not a common thing or most of these issues would not exist.

On a better note, I hope to see you next week and photograph some beautiful whitetail deer. Could you get the bobcat from last year to pay us a visit?