A New Year & A New Decade 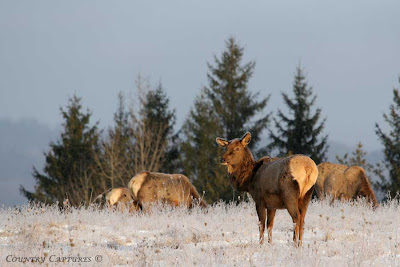 Tonight we enter into not only a new year but a new decade as well.

It doesn’t seem that long ago when people were stockpiling rations and cash in dreaded anticipation of Y2K while others were busy raking in the dough while stoking fears of calamity among the masses.

As we now know when the new year began the hens still laid, the cows still gave milk, and the worlds business & banking systems continued on as though nothing had changed.

The decade also was one of change for the Pennsylvania elk herd. After 70 years of closed season the Pennsylvania Game Commission held the first modern day hunt during the fall of 2001 when 30 elk permits were issued to successful applicants. At the time the herd was estimated to contain about 700 animals.

Today after nine annual hunts have been held the herd is estimated to be 700-800 animals. Much habitat improvement has been accomplished during this time but for the elk viewer the negative effects of the hunt are very evident. No longer do we have the numbers of mature bulls to thrill those traveling to the traditional elk viewing areas.

Sure, there are elk there, and nice bulls at that; but the mature bulls, the ones that took ones breath away, are in most cases gone. Today we who are the non-consumptive users of this unique resource must satisfy ourselves with viewing and photographing second tier bulls.

The unique treasure that Pennsylvania once had of free ranging bull elk living through maturity and breeding by natural selection had been replaced with a hunt that targets the massive bulls leaving younger animals or sub-standard animals to do the breeding. That this trophy hunt has had an immediate and clearly seen negative impact on the quality of animals available for viewing there is no doubt; but what is in question is will this unnatural selection, that removes the best bulls before their time, result in long term negative effects on the overall quality of our Pennsylvania elk.

With the coming decade I hope to see the elk’s situation change once again, this time for the better.

If you are interested in the Pennsylvania elk I invite you to visit Support Pa Elk by clicking the link in my side bar.

I hope the wildlife in America has a better than average chance in 2010. But with the economy in the slumps, I suppose there will be more poaching than ever.

I have found some nice photos from 2007 and 2008 that I would like to use in my blogs but last night was a bad night for me and I didn't get much rest. Most of the time I had one coughing fit after another. I thought I would try to just say, "thanks" to those who stopped today. I appreciate the comments, visits and prayers. I hope things will get back to normal soon.

Salty: I hope you had a great New Years celebration and you and your family have a great time to come.

Coy, Thank you so much for your visits and your encouragment with my photography. I appreciate it very much!
I hope 2010 is a great year for you and the start of a great decade!!
Happy New Year!

Beautiful photo. I hope whatever changes for the Elk are in store, are good ones.