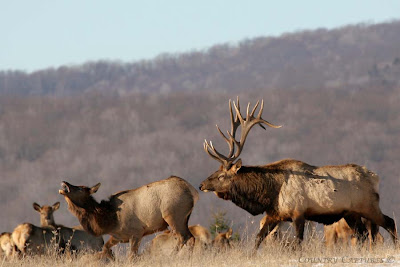 When I think of the elk rut I think of mid September to early October but in reality the rut continues sporadically as cows that missed conception cycle back into estrus repeatedly.

The small calf in my previous post was conceived well after the normal rutting season and from the activity we observed on this winter trip it was apparent that at least one cow in the herd was near estrus.

In this image the bull has approached the cow that was garnering his attention but being unwilling to mate she moved away with a flip of her head and a snarl like expression. The bull bugled a few of times during the day, sparred with the smaller bulls, and on occasion would approach the cow and each time she moved off to thwart his unwelcome advances.

There was an unbelievable amount of bugling on Sunday evening... maybe she was the cause of all the chaos!

It looks like you had a very productive visit. I hope to get there sometime in January and back to SNP also.

I hope you and your family have a safe and hapy new year.

Great information Coy and the photography is superb as always!