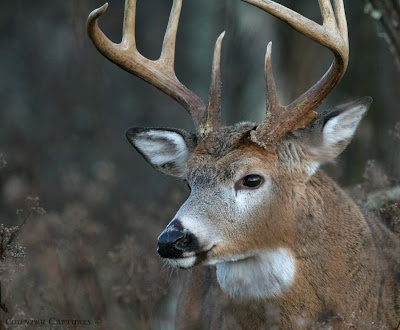 As those of you who follow Country Captures already know Shenandoah National Park is my favorite destination for photographing mature rutting whitetails. The excellent population of mature whitetails acclimated to human presence and that it’s only a three hour drive makes it an excellent destination for a day trip.

Normally I will not approach closely enough to invade an animal’s personal space and instead use a suitable telephoto lens to capture the image. In this case I was doing just that until the doe that he was following ran very close to my position with him in pursuit. After closing the distance rapidly he paused momentarily before racing on giving me this beautiful portrait.

Surprisingly the buck looks very calm in the photo although he was anything but calm frantically following the doe and running after other bucks who were attempting to cut in on the breeding activity.
Posted by Coy Hill at 12/03/2009 06:49:00 PM

Beautiful subtle lighting Salty. I love the way he is studying you.

Stunning,is the word that comes to my mind.The expression in his eyes is so intense.
Blessings,Ruth

Hi Coy,
This is a beautiful portrait! The buck is wonderful and the light delightful ;-)

He's a beauty, and I love when you can see the grain in the antlers! Beautiful!

I guess we just never know, really, how we might react under the same circumstances. I suspect we might be frantic. LOL

It is a nice photo of a beautiful animal.

He's so beautiful, and such a great pose. Nice work!