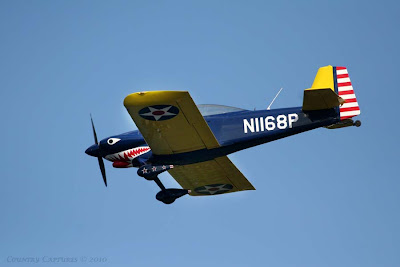 The afternoon of September 20th 2009 found me once again fishing on the local lake when a bird came swooping out of the sky passing over the lake at low altitude then pulling up in a steep climb as it approached the north end.

Seeing the unusual markings I grabbed the camera in time to click a couple of shots before it passed by.

Looking at these photos once again today I became curious about this uniquely beautiful little flying machine. Turning to the internet I soon learned that it was built and is owned by Michael J. Langford of Bettendorf, Iowa. The plane is a Model RV-4, built in 2000 and powered by a Lycoming 0-320 series engine. Further searching revealed the RV-4 began life as a kit from Van’s Aircraft Inc of Aurora Oregon and normally takes 2000-2200 hours to complete.

Now if only birds of the feathered kind were so easy to identify:)

We can only dream about the feathered birds being that easy to ID.Maybe that would take the fun out of birding.Or maybe not.:)
Blessings,Ruth

Great photo. I never saw a plane like that before!