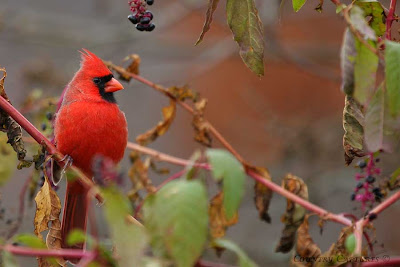 A large poke plant grew just a few feet from our naturalized bird feeders this past summer. When its fruit matured it became a natural feeder of its own providing numerous beautiful bird shots as they perched and fed among its branches. This male Northern Cardinal was helping himself to the fruit on October 31st. 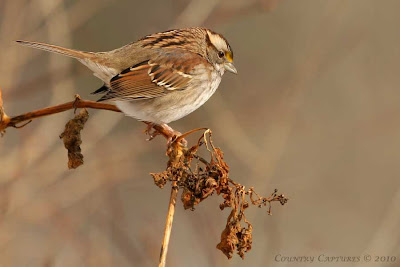 As the autumn turned into winter the poke withered leaves turned a rich brown color making a perfect background for this pretty little White-throated Sparrow’s photograph on December 22nd. 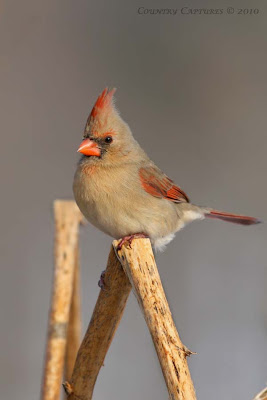 As winter’s wind and snow has taken its toll; the poke weed is dried, sun bleached, and broken, but its potential as a photographic perch remains as good as ever as this photograph of a female Northern Cardinal illustrates.

So that's what that plant is called. I've seen it many times, but just never knew what it was. Good photo's of the Birds.

Very nice shots. I really like the soft colors.

Lovely 'seasonal' photos. I appreciate seeing birds in any weather!

Love all the pictures but the last one is absolutely my favorie. the composition and the bent poke weed in the same color tones as the cardinal make it a real prize.

Hi Coy,
These are splendid pictures and this perch does help a bit to get nice background! I love them all and would have like to get them myself.. Well done.

While cardinals are one of my favorites at the birdfeeder, I'm not always aware of the beautiful, sublte colors of the sparrows. Thanks for the reminder, Coy. We are so fortunate, here in PA, to be able to view such gorgeous wildlife.

It is much nicer to see them in their natural enviroment. I'll have to figure out a way to have more native bird feeders. Nice idea.
My problem is the Raccoons and Squirrels..I don't want to run all the animals out.

Great series of photos. It is amazing to see the transformation of the poke weed. Great post. By the way, the birds are beautiful!!

Coy
Beautiful bird pictures. I like what you and Willard have done with natural feeders. Joan and I built one Saturday and it is luring them in already.