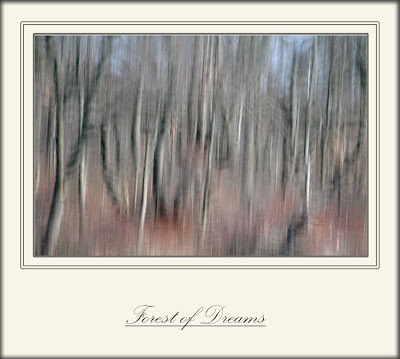 Lest you think I have became strictly a wildlife photographer, I though it proper to post an outdoor abstract, Forest of Dreams.

Winter is a good time to tidy up loose ends; catching up on chores put aside during nicer weather. Thus it is time that I tidy up my computer files; deleting, organizing, and creating fresh backups. While doing this I ran across this image from back in March. It had gone mostly unnoticed until today. With my finger poised over the delete key I began to see the potential it had to offer.

This image began as a reflection shot but I though it offered more if it were properly oriented and enhanced. As I worked with it the title became clear for to me it appeared as a barren ethereal forest found only in my dreams.

Email ThisBlogThis!Share to TwitterShare to FacebookShare to Pinterest
Labels: woodland

I think this is a spectacular shot.Glad you din't delete it.
Blessings,Ruth

Beautiful! It's amazing what beauty you can find in your "mistakes" and it's always good to really look at each shot with an open mind.

Amazing Coy. The effects are splendid. I'd like to be able to do that!

It does look like something from your dreams or mine. I have things like this hidden in my photo archives and sometimes stumble into them while looking for something else. I found this spider with worms spilling out of the prey it is eating. Yuck, and I had forgotten about it. It is on my pick a peck of pixels blog.

This is just beautiful. Glad you saw the potential and kept it.

What a wonder Coy, not only brill at wild life but brill at reaching into Dreamland too.

Beautiful abstract and great treatment. I'm so glad you kept it.

Good golly, Coy! You are multidimensional...who knew? Seriously, what a "different" kind of shot. Quite inspirational, I might add.

I love it! Nice muted coloring!