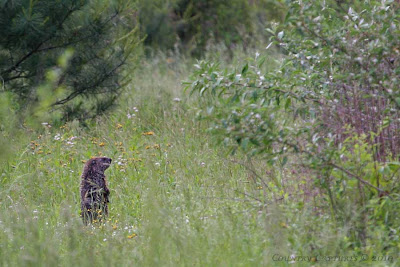 Tuesday marks the halfway point of winter and is celebrated in Pennsylvania with the largest Groundhog Day celebration in Punxsutawney; a celebration that according to Wikipedia has drawn as many as 40,000 revelers.

Not being one for large crowds, I have never attended the celebration and have no plans to in the future, however I did decide to share some of my thoughts here about these burrowing rodents.

Growing up on the family farm I learned at a young age that groundhogs were pest. Their offences ranged from borrowing under outbuildings, burrowing in the pastures as well as a minimal amount of damage from feeding on crops like corn and hay.

Consuming a steady diet of outdoor magazines like Outdoor Life, Field & Stream, Sports Afield and Pennsylvania Game News I learned that indeed the lowly groundhog did have one good use, as a target! I learned that a class of rifle was built specifically for hunting these critters as well as other “undesirable” creatures. With that knowledge the words varmint and varmint rifles were added to my vocabulary. With that my early groundhog hunting career was launched, first with a .22 and later larger centerfire rifles.

With these rifles I shot groundhogs everywhere from close range out to ranges exceeding 500 yards, all the while feeling that doing so was the right thing to do; besides the groundhog was just a pesky varmint. Killing 40-60 each summer I was doing my part to improve our area. As my proficiently and equipment improved I began to notice that finding groundhogs to shoot was becoming more difficult requiring me to travel further from home seeking my quarry.

Slowly ever so slowly the obvious truth began to dawn on me. My desire to kill more and more groundhogs was being thwarted by both a decline in population and their increasing fear of humans. In short I learned a very simple but obvious lesson; if you shoot it today you cannot shoot it again tomorrow.

Today I know that although in some circumstances the groundhog is a pest, he also comes with benefits. Groundhogs serve as a food species for numerous species of hawks as well as foxes and coyotes. Their burrows provide homes for other animals such as rabbits, raccoons, foxes, and opossums. With the benefits this stocky little critter provides I now prefer to allow them to live as long as they aren’t undermining an outbuilding or harvesting my garden a little too early.

Excellent post... it reminds me of how I took for granted our very common sparrows... great flocks of them would be the norm when I was younger... these flocks would be targeted to feed our ferrets which we used to catch rabbits. The sparrows would be shot with air rifle or caught in traps. It seemed back then it was an endless supply... now 35 years on I am lucky if I see 1 or 2 in my garden... I can go weeks without seeing one.

It is known as a pest! Why? Is that a invasive species? You did a nice post there, and I love your picture once again!

Wise words.Jake and I have often said that it is so much better to 'shoot' things with a camera than a gun.Believe we have been on the other side as well.
Blessings,Ruth

Nice post. I guess I too, prefer to do my shooting with a camera.

Seeing both sides of the coin comes with education. I hope your message is heard, not just for the groundhogs, but other creatures as well! Thanx for the great post!

Very good Post, Coy. I used to hunt these varmints, in my past. It's really the only animal that I hunted just for pure sport. They can offer a great challenge, are very aware of their surroundings, and are hard to sneak up on. Their eyesight is not too good, but they can hear and smell a long way off. I used to hunt them with my .22cal. Hornet rifle. Even tried some Bow & Arrow. Also used my .308 that was down-loaded to a 125 gr. round. Made too much noise! I stayed with the Hornet.

The land that I hunted belonged to a Farmer that I always asked before hunting his land. He liked to eat the Groundhog, so I would offer my kill to him and his Wife. She would cook them for supper. Eating Groundhog meat is not for me! Too darn greasy, and I didn't like the taste of it. It's not for me. Would you believe that I once pee'd on his electric fence? Won't do that again!

Great post on your Groundhog Coy, pop and see my Groundhog.lol.

I hunted when I needed to put food on the table or in the freezer...now I hunt with the camera. Much more fun...though I do miss a good venison stew now and then.

The celebration in Punxy is quite exciting, Coy! Rather chilly on an early February morning, but quite amusing. Glad to know you've come to appreciate groundhogs for their few benefits.