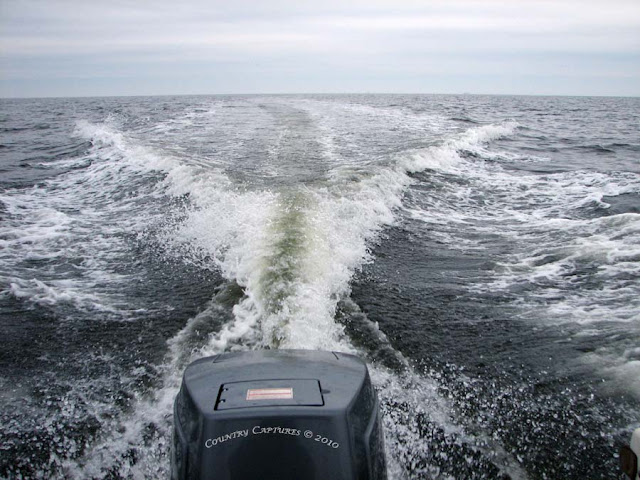 With the weather report calling for cold & calm Saturday my fishing buddy and I decided to make our last foray for Chesapeake Bay stripers.  Arriving at the marina, the frosty air and the snow lying in the boat made us wonder about our sanity but two other boats were in line ahead of us to launch so at least we knew we were not the only nut cases heading out.

Water temps had dropped to between 39 & 43 degrees giving the striped bass a good case of lock-jaw.  Trolling from 7:30 am to 3pm produced only one strike, a fat 20"er to end the season with.

The high point of the day occurred when I noticed two birds circling and diving quite a distance away.  Since surfacing bait fish draws birds, gulls, terns, and gannets; diving birds frequently lead the way to great fishing action.  With anticipation I headed the boat towards the action and began scanning the birds through binoculars.  I was very surprised to see that the two birds were mature Bald Eagles!  Soon the eagles were joined by a few gannets and although the gannets circled they did not dive as the eagles.  As we neared the location we began noticing a disturbance in the water preceding each eagle dive but each time the eagles would come up with empty talons.

Upon our arrival at the location the eagles flew away and I watched the sonar intently looking for the school of fish I was expecting to see but the water was empty.  My puzzlement continued until a lone coot popped up beside the boat.  There was no doubt as to what we had just observed.  The eagles had been attempting to catch the coot which was evading each of their attacks by diving.  The eagles were circling about waiting for the coot to come up for air and each time it did they were launching their attacks.

I suppose our arrival was welcomed by the coot, possibly savings its life but leaving the eagles hungry and having to look elsewhere for a meal.  I wish I could have photographed the eagles, but I was only carrying a little P&S camera, not wishing to subject the DSLR to the rigors of salt spray.

Email ThisBlogThis!Share to TwitterShare to FacebookShare to Pinterest
Labels: chesapeake

I really do believe that sighting an eagle, let alone two, is a good omen.

How great for you to get out on the water on a cold winter's day. I'm sure it's a much different and challenging experience than fishing in warmer temps. :)

Sounds like a perfect way to end the season and one poor Coot is thanking you forgoing out on this day.
Blessings,Ruth

Interesting post Coy, I bet those memories will take you thru till summer.lol

What a neat fishing trip to end the season. Not only did you catch your dinner but had a great natur study experience. Photos aren't everything. Sometimes it is good to just experience and remember.

I love your wake. We have the almost exactly the same on my ship except mine has 56,300 horses doing the pushing. ;)

We are in a US Port today so I am able to connect on my personal computer and am catching up. Beautiful bird pictures in your posts above.