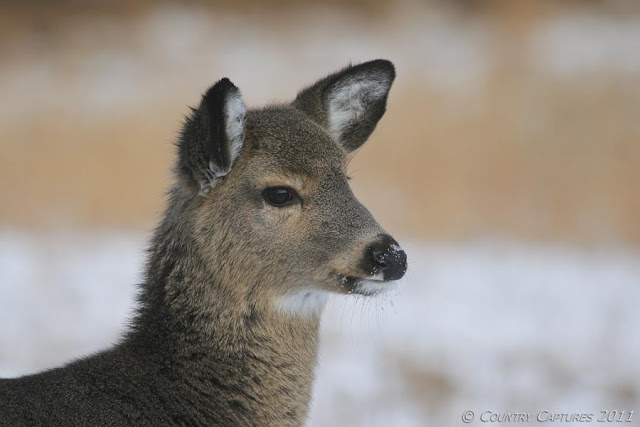 After three and one half months deer season finally came to a close this evening.  First it was archery, then a week of muzzleloader, back to archery then to gun, a short break followed by three weeks of flintlock and archery combined.  Now the deer will be safe from lawful human predators for eight months. 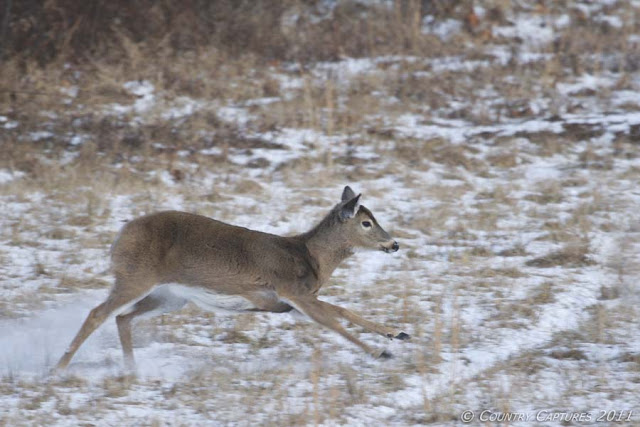 This yearling apparently thinks that the end of the deer hunting season is something to kick her heels up about as she kicks up a cloud of snow playing with her sibling.
The coming weeks will not be easy for the deer as winter's cold and snow will test their strength.  The season of the hunger moon is upon us and the deer will need to spend more and more time in their quest for nutritious food to sustain their bodies.  Coyotes will occasionally test the deer looking for weakness in a particular animal.  With the coming of spring life will become easier but survival in the wild is always a challenge.  With the guns silenced the deer have one less thing to worry about in the coming days.

Great job of capturing this lil cutie. You also did her justice through your words! I enjoy the high quality of your photography - I've added your blog to my blog roll. Thanks for sharing!

i despise deer season. my bossy's boy still has an arrow in his shoulder from the year before. one can only hope that the guns will be silenced providing the hunters are law abiding...some around here could care less...love your little yearling. she is adorable! mine were playing and jumping this morning.

Nice shots - and I'm always glad when deer season is over too.

I will be happy when the bow season ends here..at the end of January. Love your deer photos, they are wonderful.

Great shots of this cutie ;)

Love to see them playing!!