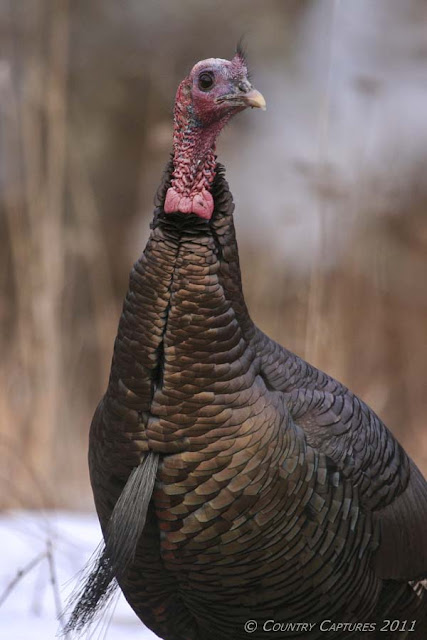 Seeing beauty in a Wild Turkeys face is an acquired taste; not one that comes naturally to most folks 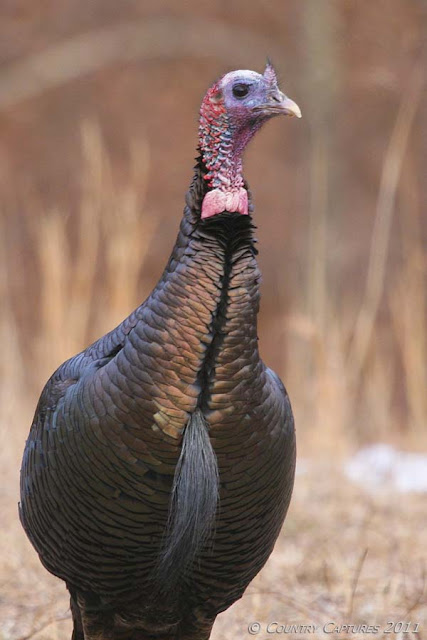 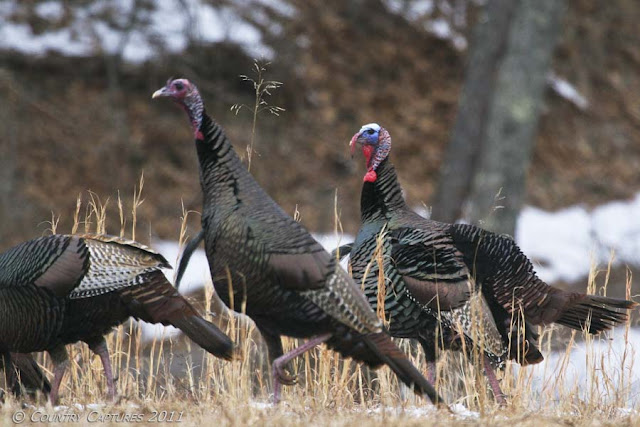 But when a gobbler begins strutting with feathers fluffed and his head colors changing hue he becomes a thing of beauty.  As he struts his head may be blue one moment only to be red the next and a moment later nearly snow white.  The snood ( the projection on top of his head at the base of his bill) will lengthen and shorten, changing color as well.
The rear gobbler pictured here is preparing to strut.  By the time he reached full strut with tail fanned he was moving out of sight.
Although the turkey mating season is still some weeks away the gobblers are beginning to vie for dominance.  When bachelor groups of gobblers encounter one another either one flock must give way or a fight will ensue.  Usually, as in this encounter, a show of force is all that is required to settle the dispute. I am hoping for an encounter where neither side will give way leading to another fight to the finish such as we photographed during Februrary of 2010.
Posted by Coy Hill at 2/14/2011 08:16:00 PM

That is a face only a mother could love,a turkey mother,that is.Face aside,these are truly beautiful birds,so much so that one hardly even notices that face.
Ruth

They are so peculiar looking! But I love their story...mating, dominance, strutting, etc.

We saw a group of turkeys today, but yours are much prettier. Your images are very sharp/clear. Terrific.

i happen to think they are gorgeous! i love to look at your photos and read your excellent descriptions. my turkeys did not come around this february but last year they visited almost daily. i hope they return and find a safe nesting area away from coyotes.

Nice captures! It looks like you can get much closer to your Wild Turkeys than we can here.

I think I am in LOVE. Can you get me their numbers. :) Wonderful shots.

Great closeup shots! Too bad he moved out of sight before the tail fanned out.

I love the strutting season and those wonderful colors! I hope you get your fight! That was amazing last year!