I've Got my Ducks in a Row 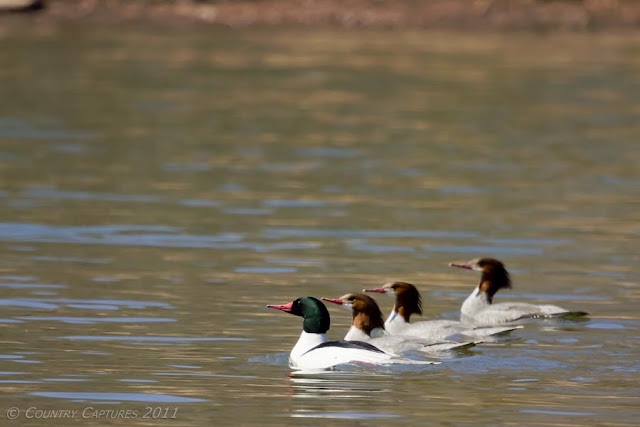 I began my day by arriving at the wetlands, walking in and setting up the hide under cover of darkness.  Across the marsh I could hear the chatter of geese and ducks as they prepared for the new day.  As the eastern sky began to lighten I could see their faint shapes moving about and soon two ducks approached close enough I could identify them as a pair of Ring-necked ducks.  Peering through the gloom I could see them looking my hide over quite closely.  Soon a pair of Canada geese approached and with much honking they swam back and forth and like the ducks observed my blind closely.
As the sun rose flock after flock of ducks and geese took to the skies apparently moving north.  The waterfowl that did stay in the wetlands avoided my hide, staying well concealed.  After three uneventful hours I decided on making a tactical shift and headed home to hook up the boat.  Within the hour I was launching on the local lake and shortly began locating waterfowl.  Loons, horned grebes, wood ducks, mallards, ring-necked ducks, red-breasted mergansers, and bufflehead were present as well as this group of Common Mergansers.  When I first located the Common Mergansers they took flight well out of camera range.  Later I observed a small flock of ducks circling and landing in a small cove.  Their new position allowed me to stalk to within reasonable range using the lake's shoreline as cover.  As I drifted around the point the mergansers appeared in perfect formation; finally I had Got My Ducks In A Row! 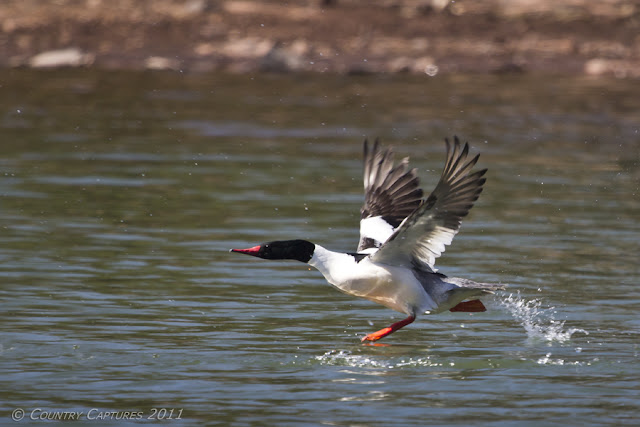 The moment was short lived as the Mergansers sprang into the air.  I focused the camera on the colorful male shooting continuous mode as he made his hasty escape.
For more Critters of all Kinds
Visit Misty's
Camera Critters Blog
﻿
Posted by Coy Hill at 3/26/2011 08:02:00 PM

Both images are super.

visiting from Camera Critters...
and following you...
hope you'll follow me back

you work hard at getting photos and your efforts pay off. Great work

Great shot of the ducks in a row. Love the second shot.

It's a toss up to say which of these two photos is my favorite. At first it was definitely the ducks in a row because to capture them so perfectly lined up is a great feat. But the duck caught taking flight is also awesome. I don't want to decide because I like both of them. Great work Coy!

Wow, you got four birds with only one shot. :) Beautiful images.

Both of these photos are terrific. Really like the ducks in a row, but also, catching that guy leaving the water is superb!

I like the ducks in a row a lot!