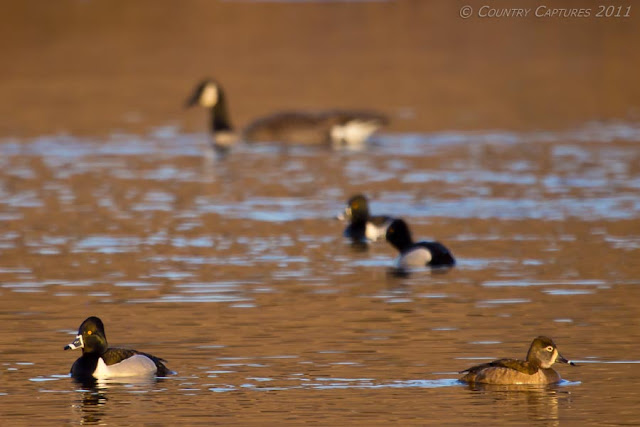 Ring-necked ducks pass through our area each spring and can be found on both lakes and marshes.  They are one of our earlier arrivals and only stay a month or so during their journey northward.  This shot was taken during our recent Middle Creek visit.  This pothole lies along the road near the visitor center.  This is one of the few places where one can get close to the water but the ducks normally shy away from the photographers and birders keeping towards the middle of the pond making close up shots nearly impossible. 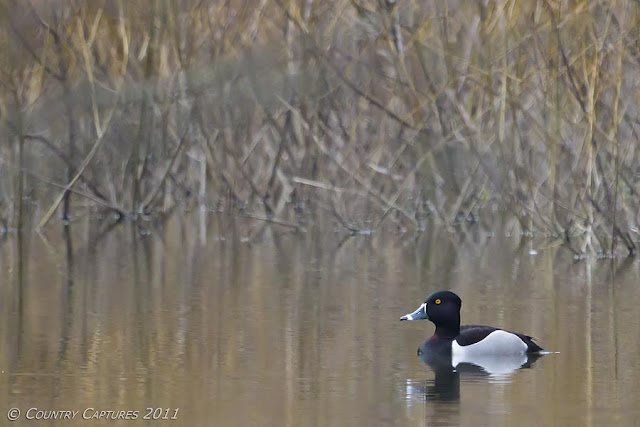 The Ring-necked ducks at the local wetlands are more wary than their Middle Creek counterparts but by using camo techniques I captured this image of a male a few days ago. 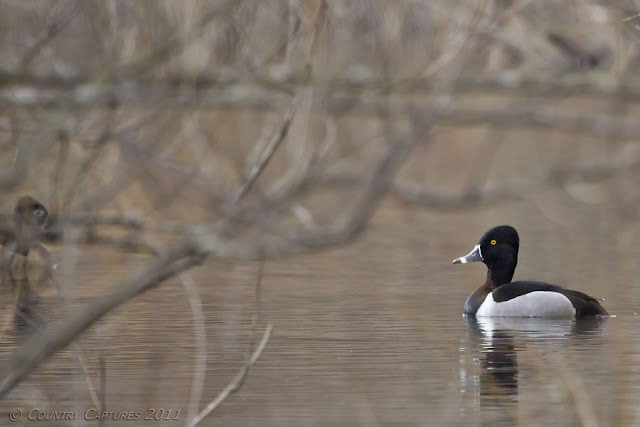 With only an hour to go before sunset I headed into the wetlands this evening.  Traveling light I carried only the camera, tripod, and a strip of camo material.  Arriving at a suitable location I simply covered myself and the camera with the material and settled in to wait.
A small flock of Ring-necked ducks had taken flight as I was arriving and soon returned landing behind  a screen of brush.  The males were pursuing females but were very careful to not expose themselves to me. However after some time had elapsed and the sun had dipped beneath the horizon this one male finally scooted into the open while the hen remains partially obscured behind a screen of brush.
This was the only shot of the evening for the click of the camera sent him swimming for cover.
Posted by Coy Hill at 3/24/2011 08:25:00 PM

All you need is that one shot.It is gorgeous.OK,I know that given the chance you will be taking many more pictures of this duck.That's what a photographer does.

I've got to agree with Ruth. All you need is one shot when it's as gorgeous as this one. It is nice to have an assortment to choose from though.

Well this is just beautiful! You do manage to get some good ones - only if it's one!

Great shots of the Ring necked ducks. I have been them a lot lately.

I like that you can actually see the ring around the neck. I always thought these should be ring-billed ducks instead :)