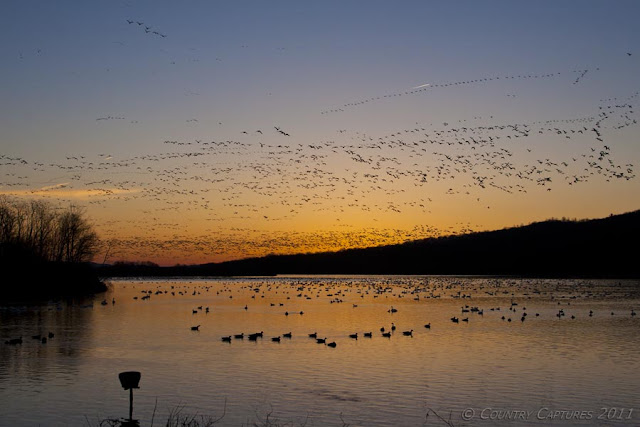 Morning lift off at Middle Creek Wildlife Management Area
Willard and I arrived at Middle Creek just before dawn Tuesday morning in time to witness the massive numbers of snow geese taking off from the lake as they moved to feeding areas.  Sunrise is normally a quiet time of day but at Middle Creek this time of year the babble of tens of thousands of geese rises to a roar. 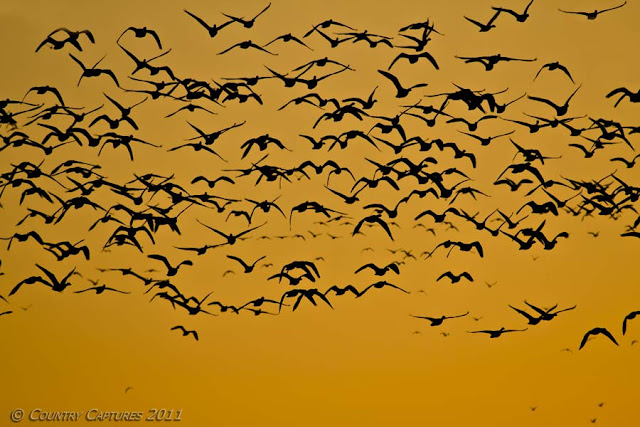 A telephoto shot captures their silhouettes against the colorful predawn sky 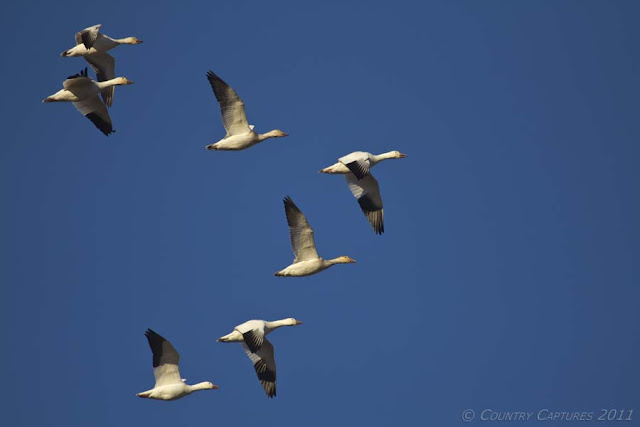 At a location between the lake and a field where the snows were landing to feed we were able to capture passing shots of the high flying birds. This group of snows appear to have synchronized their wing beats, creating an unusual image.
Snow geese begin arriving at Middle Creek each winter during the late winter thaw resting on the large shallow water lake and feeding in the agricultural fields in the surrounding area.  At times the population has been estimated to reach 120,000 or more birds.  The current estimate puts the count at 50,000 plus birds but numbers can change rapidly as only the geese know when they will begin moving farther north to their Arctic breeding grounds.
Posted by Coy Hill at 3/11/2011 11:44:00 AM

All of those are lovely, Coy. I've never been in a place with so many birds--unless you count when the crows come through. Wonderful captures. Have a good weekend.

What an image catch! Just gorgeous for the wall! These would also make great picture puzzles.

Gorgeous hardly begins to describe these images.The orange glow in the sky is pretty as a backdrop.

Coy, excellent shots. That's one heck of a lot of bird! Love that first dawn shot.
We have a huge flock of Snows on the coast right now. Unfortunately the weather hasn't been cooperating at all.

Fabulous images! Really like them all - I do favor the golden sunrise shots...The last shot is amazing with the uplift of the wings on each bird - and all with a new camera.....lucky you!

Thanks for posting these snow geese and telling a little about them. I for one remember, 60 years ago or longer, when the geese flew way up high but passed over our small village. We could watch their formation and hear them honking. What a sight. I makes the hair stand up.

Lucky you to see them.... I admire the second shot a lot and love this kind of pictures! Well done Coy

A fabulous spectacle. Now this IS my favourite kind of birding ... masses of the same species.

Lovely! Maybe I'll see some of these same birds as they make their way north.

Beautiful lighting/setting/subjects! Looks like a perfect morning for thrills!