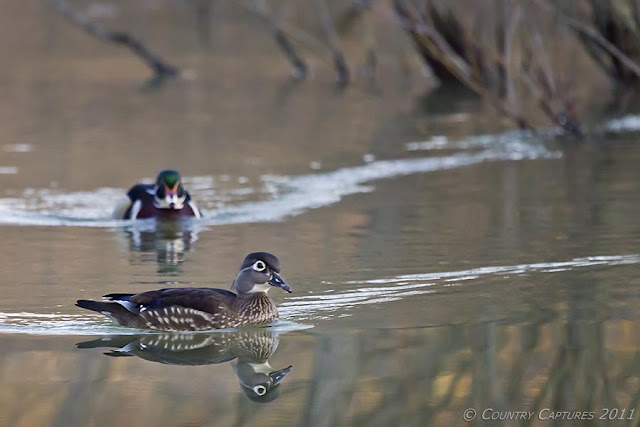 Saturday morning once again found me concealed in my little pop-up blind along a wetland water's edge.  Ducks and geese were calling from areas of the marsh hidden to me as I hoped that it was only a matter of time until some waterfowl would pass by my position.
As the first rays of the morning sun played across the hilltop west of the wetland an pair of Wood Ducks swam into view with the hen leading the way. 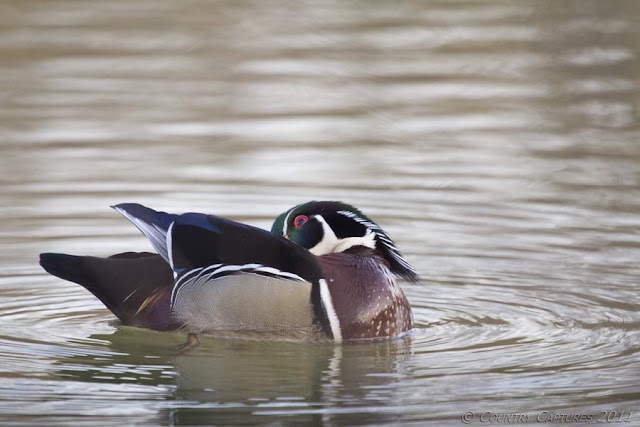 As they neared my hide the male stopped momentarily to preen.  I was surprised to have captured his webbed foot in the clear water. 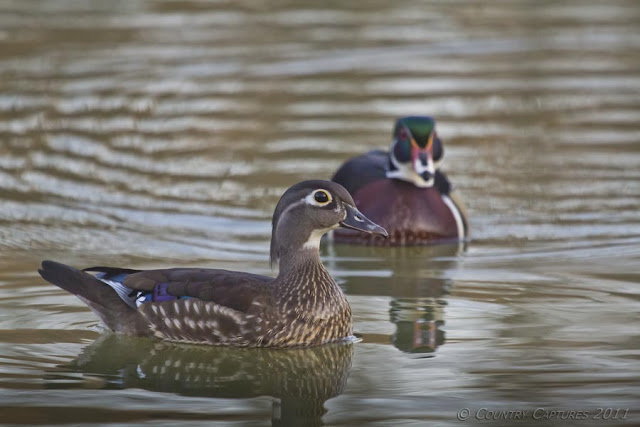 The pair approached until they were so close that the only way I could see them was through the viewfinder of the camera.  As they were coming in the view through the viewfinder was blurry and I wondered if some of my camo material had gotten in front of the lens.  With the ducks so close, reaching out to adjust the material was totally out of the question so I continued firing in case all was well.  The problem turned out to be a steamed viewfinder caused by my breath to contacting it's cold surface at some point. 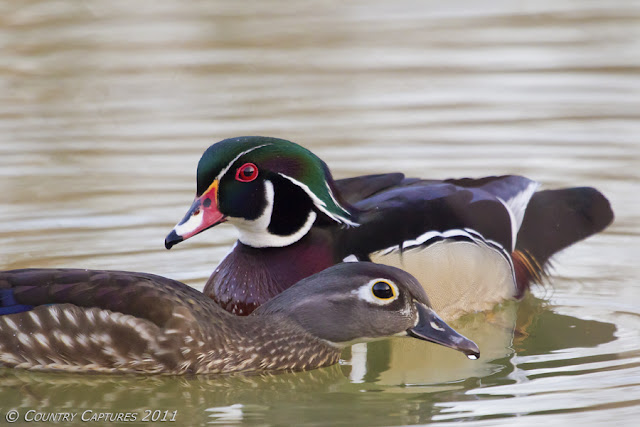 The ducks were within spitting distance for this image.  As so often happens the clicking shutter attracted their attention and they quickly moved on.
Photographing these wild wary ducks is not an easy task, they are not "park" ducks and are fully aware of the dangers humans present however as I continue to improve my camo and approaches I am getting closer and closer shots of these our most colorful North American ducks.
Last weekend a large group of Wood Duck males were pursuing a single female but by this weekend things had settled down with mated pairs of Wood Ducks calmly cruising wetlands.
Posted by Coy Hill at 3/13/2011 08:35:00 PM

These are amazing pictures.

Wow, I never come across ducks like this. Most are ugly, with the exception of a mallard or canada goose. Good captures.

Exquisite shots! That last one is truly stunning! Your camo is obviously working very well.

Now you make me very jealous... These shots are splendid Coy. I've only seen this duck in park or zoo in France, but it is definitively one of the most beautiful duck... if only I could see it in the wild ;-)

These are awesome shots, very sharp and very colorful!

Those are beautiful shots. The ducks in the last picture look like a painting.

Well done Coy! You totally earned these awesome shots! I am really impressed with the last one!

I am jealous!!! That must have been a thrilling experience. We are still frozen over here so I am having to drive at least two hours to find ducks.
Great photos!!!!

Nice work, Coy. That last shot is a stunner. Are you loving your new camera?

Very nice serie of wonderfull duck's! Love them all ;)

Fab u lous shots, Coy! Wood ducks are so beautiful.