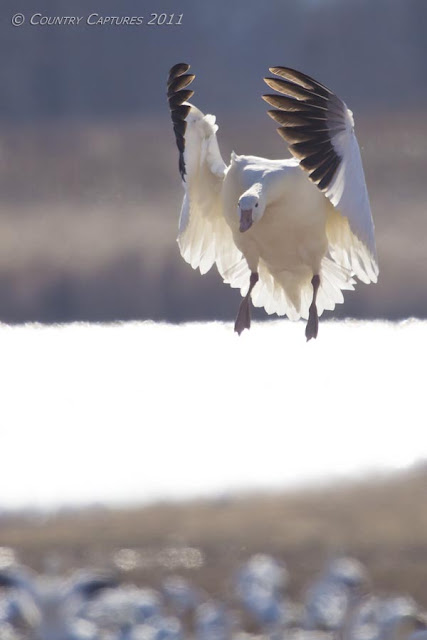 With the goose exposed properly in this photo the glare off the water completely blew out all detail.  Even with the blown out area I still like the shot
A large flock of Snow Geese were gathering in a roadside field.  When we arrived there were already thousands on the ground and during the next few hours the geese arrived continuously.  Their arrival afforded opportunities for both flight and landing shots.  I catching a goose with its wings "just right" took a combination of skill and luck.  I felt that I was perhaps lacking in the skill department so I made up for it by shooting hundreds of shots hoping luck would make up the difference.  Considering that lighting angle, wing position and body pose, and background was constantly changing as the geese wheeled in for landing I wasn't disappointed in the least when over 90% of my shots were rejects. 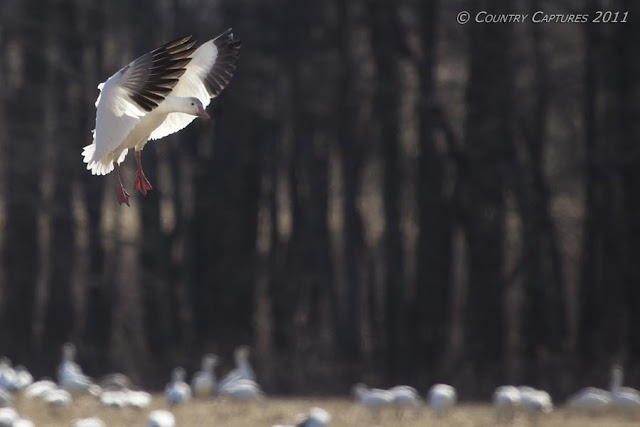 In reality I was looking for one great landing shot and with this one I consider that I nailed it. 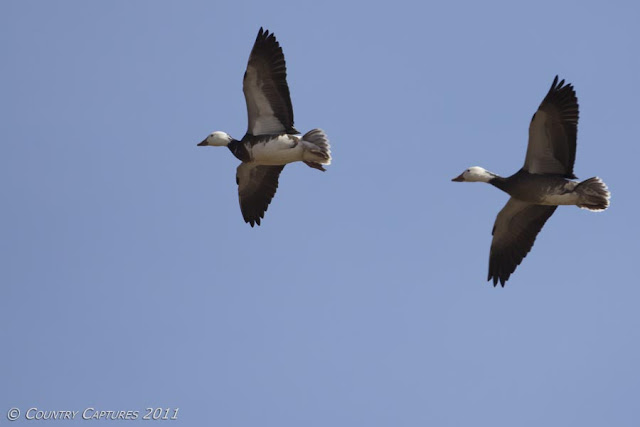 A goodly number of dark phase snow geese were mixed in with the normal white birds.  I didn't manage to capture any good landing images but was pleased with this shot as a pair circled low overhead prior to landing.
Since ice-out I have been having the time of my life photographing migrating waterfowl.  For incredible numbers of waterfowl late winter at Middle Creek is difficult to beat.
Mona over at Montana Girl asked in a comment if I am enjoying my new camera.  Yes Mona I sure am, the Canon 60D is proving to be everything I had hoped it to be and I'm very glad I was able to get it in time for the spring waterfowl migration.  My old 30D still has a job to do though, with a 24-105mm lens attached it is hanging around my neck ready for those shots that do not require the long glass.
Posted by Coy Hill at 3/14/2011 09:20:00 PM

Coy: They are such a beautiful bird.

Down yesterday and only saw a handful. Not much of anything, except got some excellent shots of a grebe. Unbelievable what a difference a week makes. Of course you could still hear sporadic shooting. I wonder what they will say when one day the big flocks don't show up anymore.

Coy
You sure have mastered that 60D in a hurry. Great shots.

Coy, I have been looking almost everyday and enjoying the great photographs you have been posting. Sorry I have not had time to comment I decided to take a break this morning and catch up on a few.

I have not gone anyplace since November to photograph anything so I have been living my outdoor life through you and Willard.

Coy, your shots are wonderful. Love those flight shots. I am enjoying my new Canon Rebel T2i as well. All of my photos I've posted since Feb. 28th (when I received the camera and a new 70-300mm lens) were taken with it. I feel my photos are much sharper now. I liked my 40D, but somehow, the results weren't as good as they once were. It was a toss-up between it and the 60D. As I mentioned before, I went for the lighter, smaller camera. However, the T2i is less frames per second than the 60D. Maybe next time! Love your blog.

Excellent shots! Middle Creek looks like a great place to be at this time of year.