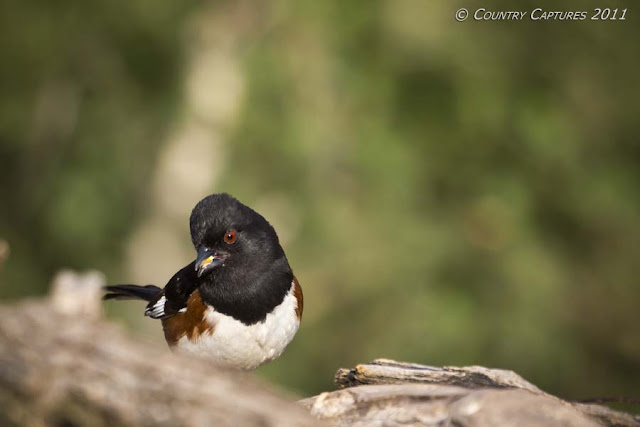 This time of year usually finds me either on the water or along the water's edge but one recent evening I decided to join Willard at the bird feeders.  Of course the usual culprits were present but under the brushy cover surrounding the base of the feeders we spotted two male Towhees busily scratching and hopping about.  Getting a photograph was darn near impossible because of the intervening brush and besides their coloration was dull and drab as the fed in the shadows.
All of that changed in a moment as one hopped up into the sunlight and held still just long enough for a couple of clicks with his reflective feathers aglow.  A moment later both were back to business hopping around in the shadows but his "moment in the sun" was just long enough for me to add this image to my bird collection; my best image to date of the splendidly beautiful Rufous-sided Towhee.
(Thanks Paul for pointing out the name change)
Posted by Coy Hill at 4/22/2011 08:52:00 PM

Coy: That is a beauty, I've never seen one before.

And, what a handsome fellow he is! Great shot!

Stunning picture and well worth the wait.

Never seen anything like that. What a beautiful bird and wonderful capture.

This is a beautiful bird and your low angle picture is perfect! It tend to be a bit crazy over here in the way that we do not get the usual stuff around!

I do have a question. How do you know what this bird is? Do you take an Image and then look up what it is or just know a whole lot about wildlife?

Good question Corker! I'm no different than anyone else, we all have to learn what we know sometime. As for the birds when I see a bird I don't know I try my best to get an image, any image no matter how poor it may be for I want a reference image that I can use to look it up in books or on the web.

A good bird guide works best for me as I can flip through the pages looking for a bird that matches then cross reference with its range and description etc, etc and if all of that doesn't work then I'll post it and ask all of you if you know the bird and my viewers have never failed me yet!

Isn't the "Rufous-sided" nomenclature out-dated. Where you are this would now be named Eastern Towhee I think, with the birds out west being the Spotted Towhee.

Thanks Paul!
I was unaware the towhees had been renamed. Thanks again.

Great capture Coy. We don't see these over here in the Chemung area for some reason. I remember years ago getting some great shots of Towhee's and Buntings up at the Blueberry Patch on Ridge Road near Sterling Run. One of my fondness memories. Thanks for sharing.

He's a beauty, for sure!