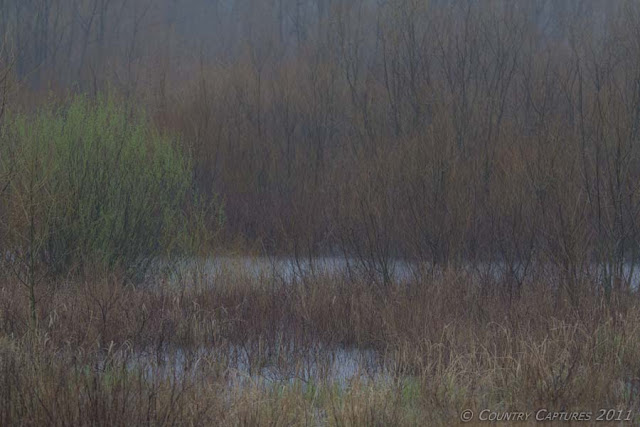 Our weather has been unsettled the last few weeks.  This has made it difficult to work in some good camera time between my work schedule, chores and the frequent rains.  Tuesday evening the sky looked as if it may break so I took the chance and headed to the wetlands.  Only a couple of miles from home and rain drops began hitting the windshield and the sky became darker by the moment.  By the time I had the gear ready to head into the wetland the rain was pelting steadily down with the occasional flash of lightening followed by the clap of thunder.  A roofed in pavilion sits near one edge of the wetlands so I took cover as the storm passed through.
I made this shot during the storm showing a willow beginning to green contrasting with the browns of winter. 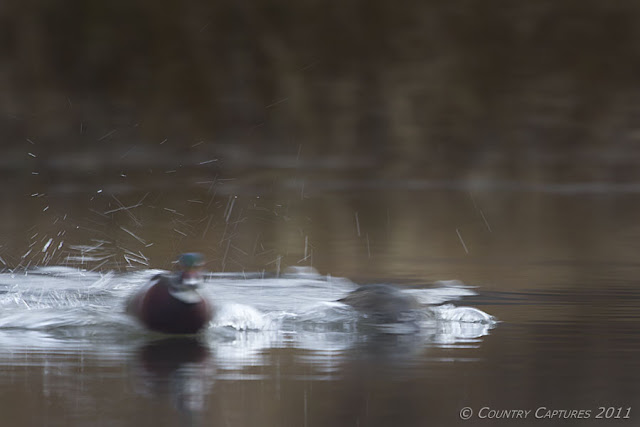 When the rain slowed I headed in and set up hoping for duck activity and I didn't have long to wait.  I could hear a female wood duck calling and soon she and a group of males swam into sight.  It was obvious they had mating on their minds.  The female was swimming about quacking loudly followed by the group of males.  At times she would drop her head into the water while either chasing a male or being pursued by one.  With the light levels very low and shutter speed in the pit I still attempted to capture the intense action taking place in front of me. 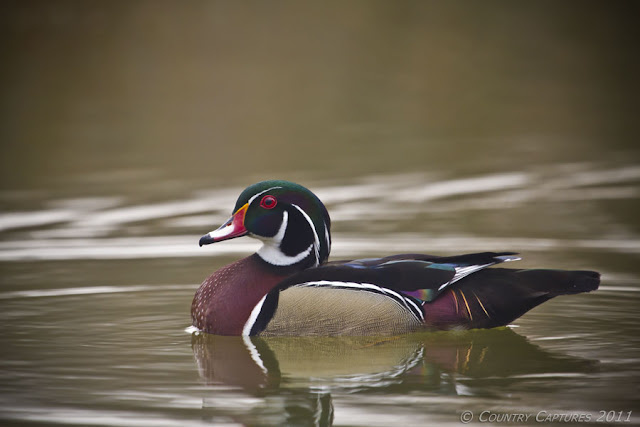 400mm , F5.6, ISO400, 1/45
The storm moved away and light had improved a slight bit when this male came very near my hide.  This first click of the shutter brought him to a stand still; just what I needed and for the next few frames he remained stationary before raising his crest in alarm and swimming off into the surround cover.  For the remainder of the evening I could hear the female calling and the occasion splashing as the woodies continued their mating ritual nearby.
Posted by Coy Hill at 4/20/2011 08:32:00 PM

Handsome guy. :) It's amazing how pretty Mother Nature made this guy.

Beautiful sharp image! Great shot. You're really teasing me into getting a blind.

A really nice colorful Image of the Wood duck. I remember you had told me where this wet lands was, but don't remember. Where is it again?

Wow that last portrait is superb Coy, a pure beauty... I also really love the blur one.. It gives a nice dynamic! We are getting very strange days here too, with lots of wind and rain... Strange weather at the moment

Everytime I see a photo of a wood duck I think that there couldn't possibly be something so beautiful in the wild. Their colors are so vibrant that they look more like paintings. I can't wait for the day when I see one of these beautiful creatures.