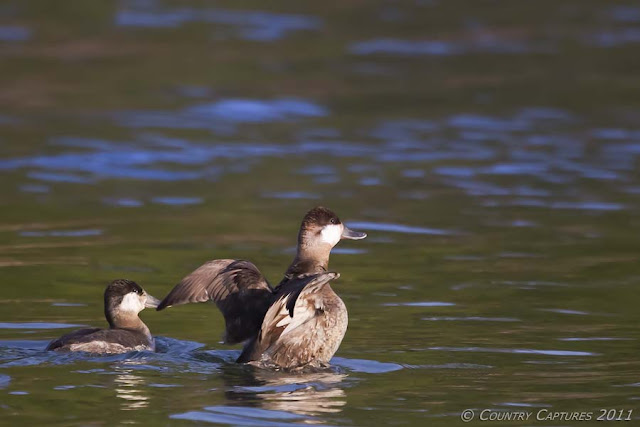 While boating Friday I noticed a flock of small ducks at a distance near the breast wall of the lake.  At first glance I thought they were female buffleheads but upon drawing nearer I realized they were Ruddy Ducks.  Both buffleheads and ruddy are usually difficult to approach closely by boat but as the wind was blowing towards them I felt that I had a better than average chance of getting within photo range.  I have learned over the years that a drifting boat is far less alarming to waterfowl than one under power, even though that power is just an electric motor running at slow speed.  Positioning the boat and allowing the wind to do the rest allowed me to drift well within camera range.  As the birds began to become nervous this male in non-breeding plumage rose to flap his short wings. 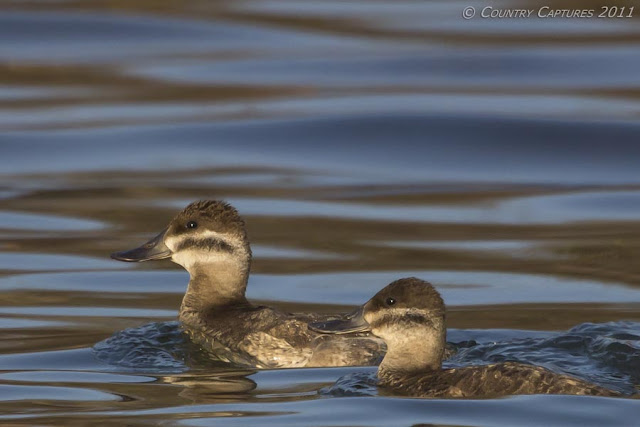 The ducks then turned to pass behind me.  Their turn improved the angle of light allowing me to capture what I consider my best ever shot of ruddy duck hens.  One of the first things that caught my eye in this photo is the wake pushed up by the lead duck's breast, a touch that I certainly could not have planned.
Once the ducks had moved behind me I began moving away not wanting to disturb them further as I had gotten what I had came.
The little ducks though had other ideas.  Once behind me I heard the flapping of wings as the ducks made their unobserved escape. I have observed many species of wildlife use this exact same tactic of escape; waiting until they think I am not looking to make a quick exit.
Posted by Coy Hill at 4/18/2011 08:20:00 PM

Great photos! I especially like the 2nd pic. Until we started photographing ducks we never thought much about how many species there were. We haven't seen the Ruddy Duck until now. Good job!

that is an amazing shot - the wakes, the blue and browns in the water. lovely!

The last picture is perfect.I love to get those unexpected surprises in photography,like the wake here.

Wow the last shot is stunning... I love the low angle you got and the sharpness is incredible! Well done Coy on this nice encounter!

Fantastic shots! The light on the second one was just right, and you captured the motion with the wake.

Another great post Coy. You do have your stuff together..And thanks for the nice comment on my blog as well.

Great shots, Coy! I need to learn to be more patient if I ever expect to get shots like these. :)

Ruddy cute - if you ask me Coy,lol.

Having trouble with my net connections at the moment, keeps popping on and off a lot.
Got Virgin coming out thurs, hoping to have it fixed and working all the time.