What were they Thinking? 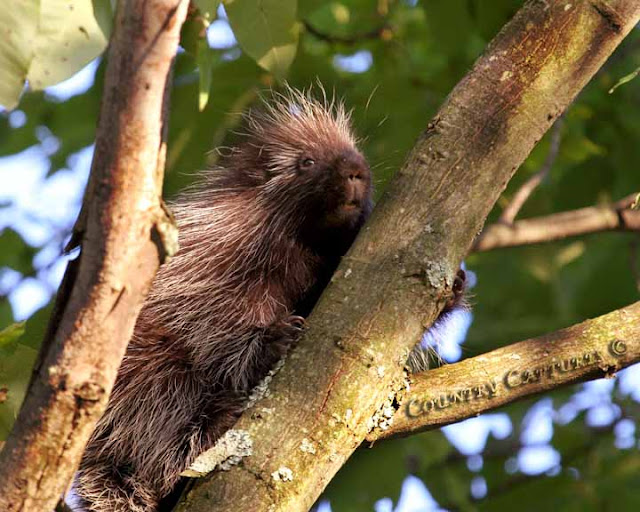 ﻿
In ground breaking action at the April meeting of the Pennsylvania Game Commission a number of new hunting opportunities was acted upon; Porcupine Season! Under the new season hunters can take porcupines from September 1st through March 31st with a daily bag limit of 6 and a field possession limit of 12.

Now I realize that porcupines cause a certain amount of damage to timber and the occasional wayward critter can do considerable damage to cabins and campers and I can understand the PGC not extending total protection to porcupines but a hunting season? Will we have large groups of hunters out trying to bag their “limit” of porcupines? How is the hunter supposed to carry his limit? (It could be fun to watch someone try though). I also noticed that all porcupine hunters are required to wear 250 sq. inches of fluorescent orange material so at least we won’t have to deal with many of hunters affording themselves of this “New hunting opportunity” shooting each other in mistake for a porcupine.

And then I wonder what our successful hunters will do with a bag limit of porcupines once they figure out how to find six and carry them home. Will they be used for table fare? Will the laws governing wanton waste apply to the porcupine if the successful sportsmen decide to chuck their trophies in the garbage at days end?

What were they thinking?

And then I read the news release farther.

Board Makes Other Changes To Seasons


“The Pennsylvania Board of Game Commissioners today gave final approval to a regulatory change to allow for the hunting of starlings, English sparrows, opossums, skunks, groundhogs and weasels during legal hunting hours of the spring gobbler season. The Game Commission staff noted that this change will increase opportunities for hunters pursuing these species without creating unacceptable conflicts with spring gobbler hunters” (PGC news release #045-11)

Ok so now you have it. Sportsmen dollars spent to rewrite regulations for spring gobbler season to allow hunters to pursue other species. Money well spent to keep the turkey season from conflicting with a starling hunter or another who finds the English sparrow to be his quarry of choice. And God forbid if turkey season would conflict with someone who just wanted a ‘possum for the family dinner table. We all know that you shouldn’t stand in the way of anyone wanting to kill a skunk or a groundhog any time or place. And last but not least; the weasel must be included in this list of vermin to be exterminated at every opportunity.

And then I think back to the last time I spotted a weasel, and I think, and I think, and I don’t recall. Through the haze of the years I do believe that I may have seen a weasel maybe once, maybe twice. That’s enough! They are out there! They are killers! Kill them! Don’t let any silly regulation stand in the way of Killing the Killers!

WHAT WERE THEY THINKING?

If you haven’t seen enough of what they were thinking click here to see how they have decided to kill more of the acclimated elk in the Pennsylvania Elk tourist area.
Posted by Coy Hill at 4/17/2011 10:25:00 AM

Coy, I must admit that I find no real reason to hunt a porcupine. What for? Even though I have never seen one in the wild, I think they should be left alone. Your right about lot's of hunters out there trying to bag the limit, but what are they going to do with it? It's much better to get out there armed with a camera, like yourself, than a weapon.

I'm starting to think that the Penna. Game Commission is getting a bit dumb for something such as this. What are they thinking!

Coy,
Your article is brilliantly written and I couldn't agree more with your tone and puzzlement. Yes...What the hell are they thinking? I spent pretty much the entire decade of the 80's as a Deputy Game Protector in Erie County. My family roots however are were from the DuBois and Emporium areas. As a kid, teenager, young adult, middle aged man, I can cherish many fond memories of our family "hunts" to Winslow Hill and surrounding areas, including St. Marys. We armed ourselves with camo clothing and CAMERA's. Sometimes we got skunked and didn't see any Elk on our trips. Other times we were thrilled to fill our camera lens with trophies and cows and young. Times sure have changed. Now as I approach my mid 60's I'm sorry that I won't be able to share those types of trips with my boys and there kids. There is a big difference going to "view" tame Elk on Winslow Hill nowadays to the days that us elders went as youngster's to seek and catch a glimpse and get video or pictures of beautiful Pennsylvania Elk. Looking at a nice size bull with a big ugly collar on it just isn't the same. Way to go PGC. What were they thinking?

Either way, I hope no critters are just "thrown in the garbage". That breaks my heart, actually.

I dedicated most of my working life to the Agency and thought we were there to help and protect wildlife, but the direction that the agency has taken on many things in the past few years has left me deeply troubled and I am glad that I am no longer working for them.

We see Porcupines here - usually up in a tree minding their own business. Have also seen a lot of dead ones, for which apparently gun-bearing local talent feel the need to kill just because they can. Mystifies me. Your post is well-written.

They were and are not thinking!!

Wow I'm kind of stunned by this news, especially as this is a species that we do not have and do not know too much in Europe!!! Very strange attitude towards this species!

What is even more amazing is that the porcupine season was approved although no research on population status has been done and no management plan has been prepared!

While claiming to manage our wildlife scientifically this commission apparently cares not a whit about scientific wildlife management as it instituted a season on a previously un-hunted animal with absolutely no science to back it up.

Apparently they also were unconcerned that the porcupine’s quills and guard hairs have economic value estimated at about $100 per animal per testimony offered prior to their vote. With Pa’s current law allowing the selling of inedible part of legally taken wildlife this in of itself is enough to cause widespread killing during the long hunting season.

Makes me sad to read about such things, Coy, especially from our own state of PA.