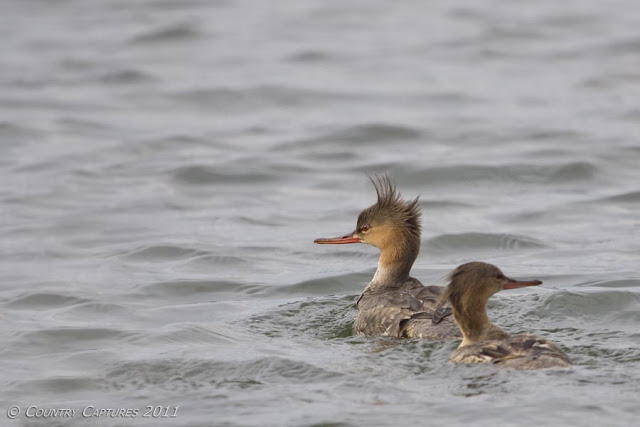 Mid May and the Red-breasted Mergansers are still here!  The mergansers arrived shortly after ice-out.  By early April I could expect to see twenty to thirty during my boating forays on the local lake.  Their numbers have been dwindling since early May and today I located just two.  I expect this lonely pair will soon be winging their way north to the breeding range in Canada.

Many of my attempts to get close-up on the water shots end with the birds taking off.  Mostly they fly away giving only butt shots (and nobody wants butt shots!) but in this situation the merganser crossed in front of the boat.  My only frustration was that I didn't get the eye as sharp as I would have liked.  Never the less the photo does illustrate the bird's take-off technique as it patters across the water.
In addition to the mergansers I also observed an immature bald eagle and a single loon, however no photo opportunities presented.

Oh that running on water shot is fabulous! Great work.

captivating, especially the run up to flight.

I love the running on water shot--beautiful capture!

I just LOVE that second image! So cool!

Wow! Love the hairdo. The second flight shot is great too.

I absolutely adore the mohawk!