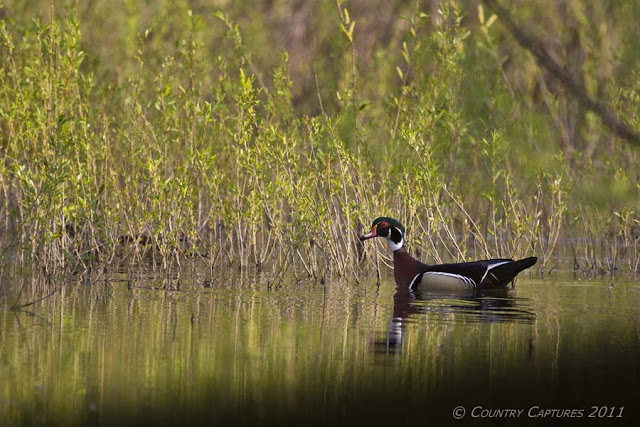 Finding a couple of free hours Sunday evening I headed to the local wetlands eager to see if any young ducks were about. As I moved into position I spotted a wood duck hen leading a large brood along the water's edge screened by the overhanging brush.  Disapointed that I was unable to photograph the young woodies I hid along the shoreline hoping for activity to develop.   Some time later this colorful male swam into view just long enough for a couple of quick clicks before he sought safety elsewhere. 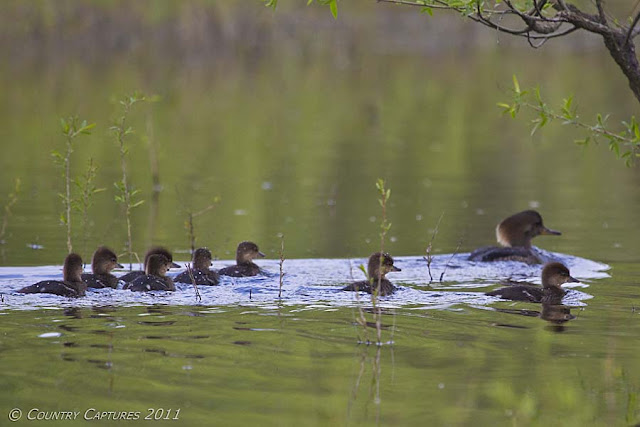 Fifteen minutes later I was caught totally off guard by this family of Hooded Mergansers as they swam into view at close range from my left; the blind side of this shooting location. Try as I might I could not find them in the camera's viewfinder until they were nearly out of sight leaving me with a shot that is not nearly as sharp as I desired. Even though I failed in obtaining a "print" quality image I was still pleased to be able to document this year's first encounter with the young hoodies.
Posted by Coy Hill at 5/10/2011 09:02:00 PM

I get a thrill each time I see a male Wood Duck.Of course all baby critters are cute.

Hoodies and Woodies! Love it!

Great pictures Coy! You got us hooked on photographing the various species of ducks.

Lovely photo of the Wood Duck. Too bad the chicks stayed out of view of your camera, but the photo of the Mergansers family is very nice. Even if it's not print quality, I do like the almost dreamy feel of it.

Young water fowl are one of the nicest things about spring. So cute!