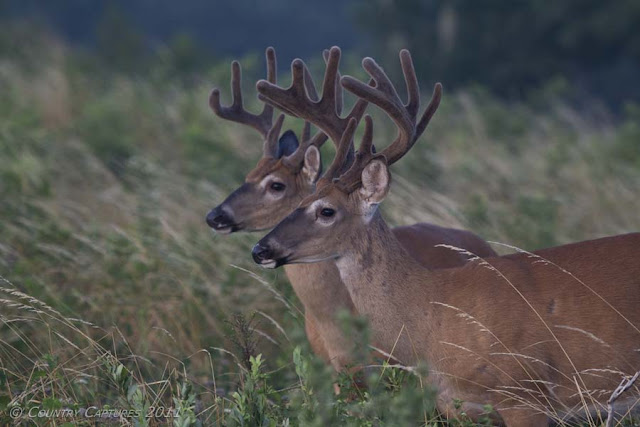 Except during the rut mature whitetail bucks typically form loose knit bachelor groups.  This was the situation we found ourselves in with our early morning SNP whitetail encounter.  As the morning progressed the group grew to seven mature bucks before they began retiring to the woodland shortly after sun rise. 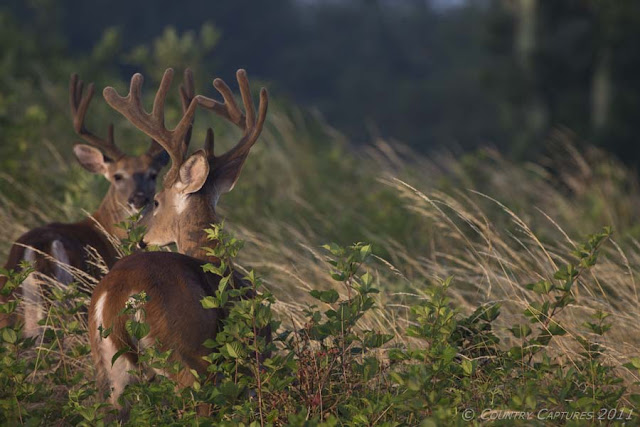 In heavily hunted areas where bucks are killed before reaching maturity (2.5-3.5 years of age) bachelor groups are seldom seen.  This was the case in our region of Pennsylvania before antler restrictions were instituted nearly ten years ago.   Shenandoah National Park is an excellent place to observe this behaviour as not only are the deer acclimated to human presence but with no hunting allowed the bucks can reach maturity and even survive into old age. 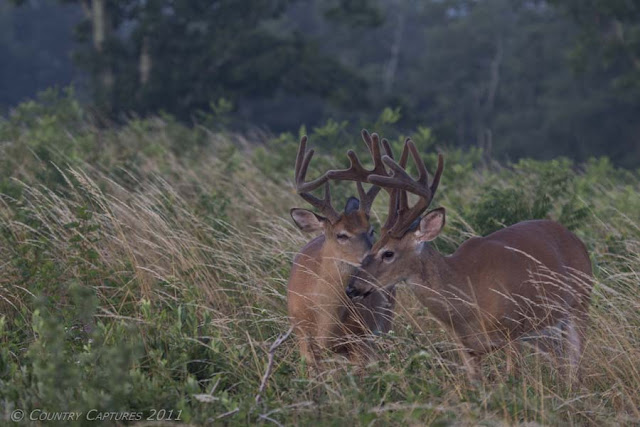 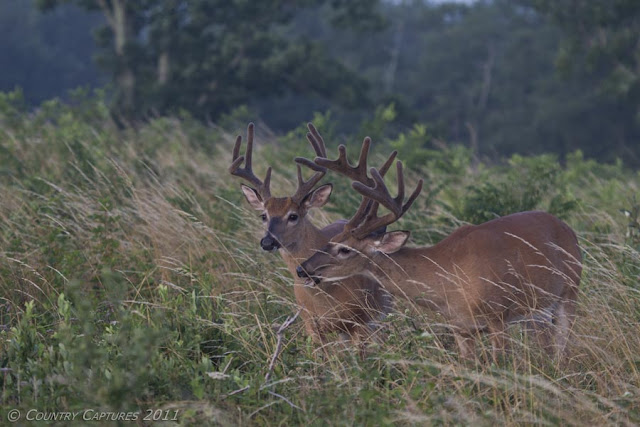 One of my goals when photographing wildlife is to capture interaction between animals.  Too often people think of animals such as deer as just being a bundle of protein and instinct.  Close observation during time afield quickly disproves such notions as one observes the animals expressing emotions much like those of our own.

This pair of bucks may very well square off in combat during the rut but for now the affection between the two is unmistakable.

I've been a part of a "loose knit bachelor group" back in the day. It was mainly just Ebenezer and I, but we never "affectionately nuzzled", though ;) LOL!

Yeah, animals definitely show emotions, that's why I would have a hard time killing an animal.

Cool shots...you are lucky to live where you can photograph nature and it's critters. Thanks!

They do look so splendid in full velvet!

Animals so often display tender emotion. Just observing our cows and sheep is an education. A sheep will mourn a still born lamb for a long time. It grazes within a few yards of its lost offspring for more then a week and can be observed to be sorrowing for at least a month.

When a cow is calving, other cows will stand around in an encouraging way. Not quite as expressively as elephants, but certainly caring.

A great set of photos Coy. How is your health holding up?

Sweet shots. I can almost feel the velvet on their antlers.

When my dad lost sight in one eye, I encouraged him to start hunting with his camera since he couldn't use a gun safely. Took him a few years but he finally realized it was a different way to view these beautiful animals.

Beautiful shots, Coy! The lighting in them is really nice.

Great images. This is my kind of hunting: shooting with a camera. These are definitely shots to be framed and hung.

Nice shots. It's always fun to go up on the park and check out the bucks.

Excellent rack shots! It seems like every time I get a good chance to photograph a whitetail, I am looking at a doe.

Really i appreciate the effort you made to share the knowledge.The topic here i found was really effective to the topic which i was researching for a long time
digital image editing