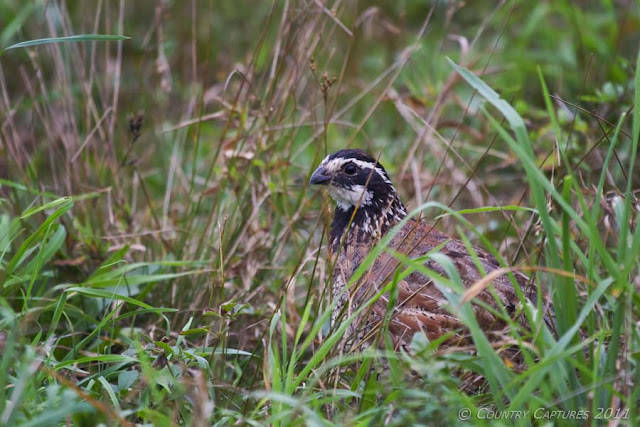 Back when I was a youngun running around the reverting farmland in our area, encountering Bobwhites was very common.  A covey of bobwhites flushing at my feet while I pushed through briers trying to jump a rabbit would startle me to where seldom could I get off a well aimed shot.  Fifteen to twenty minutes later the bobwhites would begin calling as they regrouped.
That was then.  It has been many years since I seen my last bobwhite in our area.  It has also been many years since the Pennsylvania Game Commission closed bobwhite hunting here as well but the population has never recovered.  So you can imagine my surprise when while watching field hoping for a nice buck to appear when I noticed something moving in the grass nearby and identified it as a bobwhite.
I have no way of knowing where it came from but I would expect that escaped from a captive flock or was released.   However it came to be there doesn't matter.  Its appearance gave me a lifer photo. 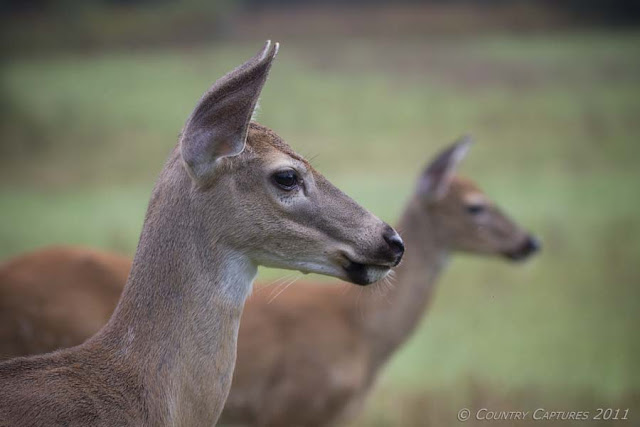 No bucks showed up during the outing but the bobwhite and this pair of fawns more than made up for any disappointment I may have felt otherwise.
Posted by Coy Hill at 9/27/2011 07:10:00 PM

gorgeous fawns! and congrats on the bobwhite spotting!

Congratulations on a very nice shot of a Bobwhite. I have never seen one of those. Nice Fawns too, love his little whiskers!

Love the quail picture. They were such a part of my childhood - hunting and raising them, though each hobby stayed separate!

That looks like a fawn in a mirror! Two nice pics.

Cool you got one bobwhite anyway.... You can maybe think it is wild ;-) As it might recolonise your are from another, you never know. I do hope it is the reason you saw it ;-)

I used to hear bobwhites all the time as a kid in my native state of Michigan. As the years went by, the population seemed to drop off. I don't know that I've ever heard one here in Kentucky.

The fawns are amazingly beautiful. They look like velvet. Cute bird as well.

Wonderful for you to see the Bobwhite, and your photo of the fawns is supurb!

Congrats on the life shot...it's a beauty! Two years ago I asked you about what I thought were bobwhites that I had seen in my yard. I didn't realize that bobwhites were a variety of quail. I have not seen anymore since that time. I sure hope they make a come back in our area. A friend of mine is doing bobwhite research down in Kentucky.