Bugling in the Twilight 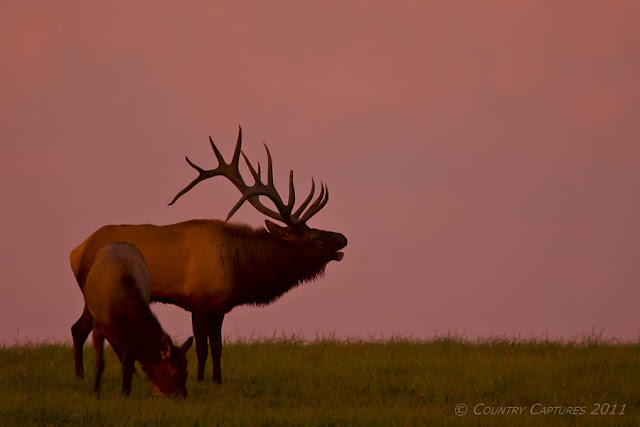 Photo-2010
My 2010 photo excursion during the Pennsylvania elk rut was plagued by drab gray skies and frequent showers.  While the elk action and encounters were meeting my expectations the weather was making exceptional photographs few and far between.  It was during the last moments of my last day, during the evening twilight that the sky took on a spectacular glow.  It was during this brief time that I was able to capture the best images of the entire trip including the image of this same bull that graces the header of Country Captures taken a few minutes later.
If there was one thing this encounter taught me it was "It ain't over 'till its over"!  Don't leave a good subject until it is absolutely too dark to shoot.  You never know what will happen in the next five minutes.

Just gorgeous. And you're so right, you never know what will happen.
— K

Wow!!! This is spectacular.

My critters, please come by when you get a chance, have a blessed Sunday!

When are you going to publish a book of these glorious photos you take? Such beauty would be wasted on just a calendar. A glorious twilight shot indeed!

Five minutes can make a huge difference when you are photographing outdoors. When that glow occurred I'll bet you forgot to breathe while you were trying to get as many photos as you could.

What a fantastic photo, Coy! Elk are so majestic to begin with and catching one in a bugle is awesome.

The elk are wonderful animals, your photo is great.

Such a fabulous photo! Your patience paid off.