The Battle of the Titans: Pennsylvania Elk Fight 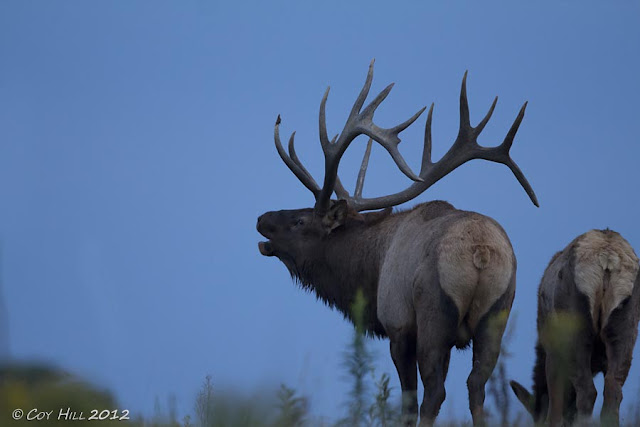 Rolling out of bed at 2:15 this morning I had high hopes for a morning trip to Pennsylvania's elk range.  Reports coming in from friends in the field told that the rut was well underway and with my good friend and favorite fishing buddy able to get a day away from work I was ready to introduce him for his very first time to the Bulls of Winslow Hill.
Arriving at our destination at 6:15 we hooked up with Willard and another of our wildlife photog buddies and headed toward the bugling.  After spotting a good bull on a distant ridge, we continued on  towards the closer bugling coming from just out of sight.  Topping the ridge revealed that we were close in on an older bull that I have photographed each year since first identifying him during the fall of 2009.  The big fellow had a small harem and as we would soon learn this cow standing beside him was ready to be bred.
As other bulls began moving in on his position the cow suddenly lifted her head and headed off with the big fellow and a "harem" of photographers in tow.  When an elk walks a person practically must to run to keep up and they easily outdistanced us as they disappeared over the ridge. 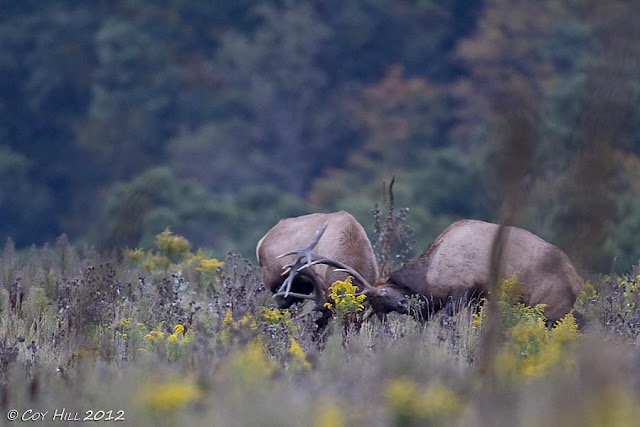 When I came in sight of them again the big fellow was circling another bull and as I set up the tripod the bulls came together.  The violent fighting lasted for about a minute until the challenger had had enough. 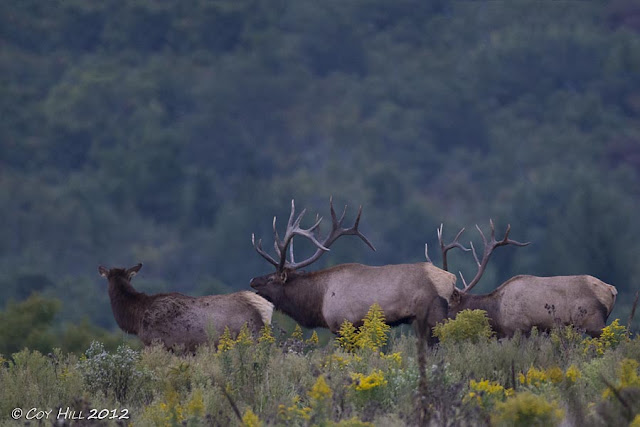 After a short time of again circling each other the cow again headed over the ridge with both bulls in following along. 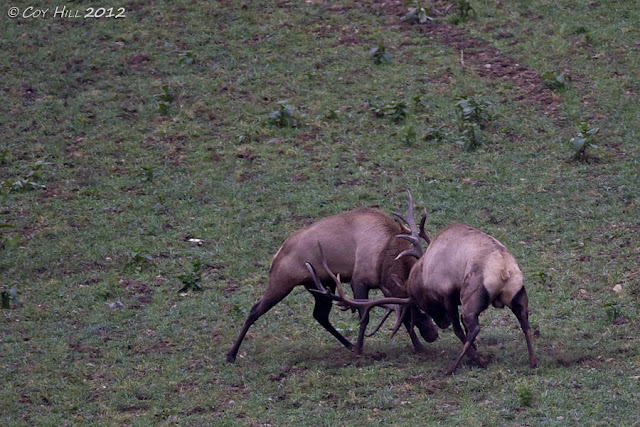 Topping the ridge and again catching sight of the elk I saw that the cow was approaching another bull; a much larger bull than the challenger that the had just been vanquished.  Before I could get the tripod set up the big fellows had locked horns in a vicious contest of strength and skill. 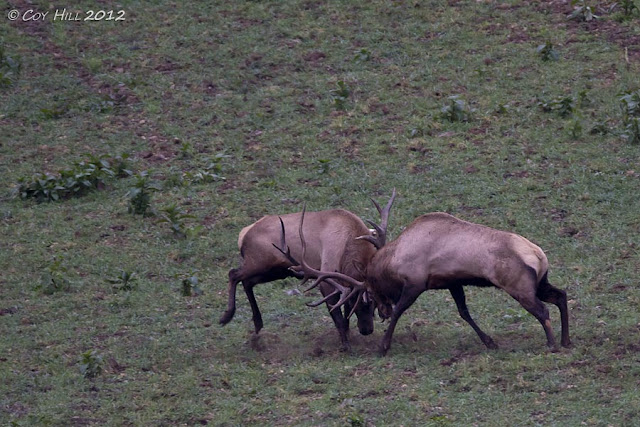 In moment the new challenger had obtained the high ground position and used it to his advantage, pushing the defender down the hill backwards. 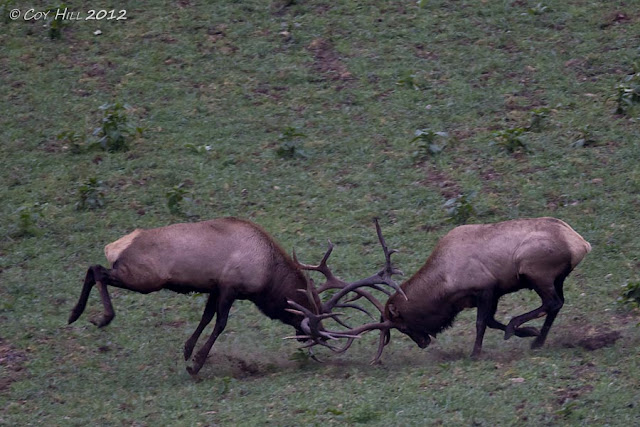 The fighting was ferocious.  Here you can see the defender on your left with all feet off the ground as the challenger pushes him downhill. 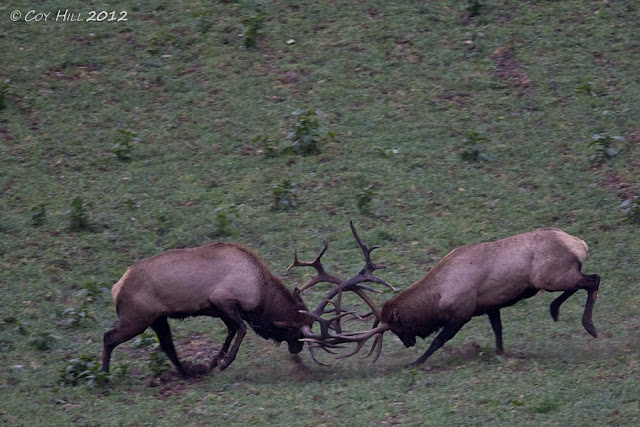 Regaining his footing the defender tries to stop the charge 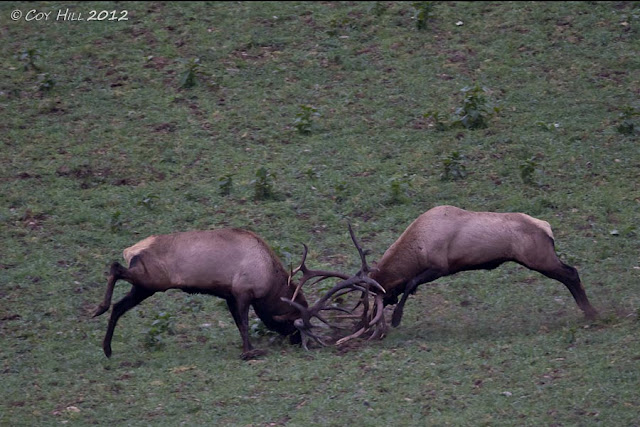 And buries his right beam in the ground in a futile attempt the staunch the attack. 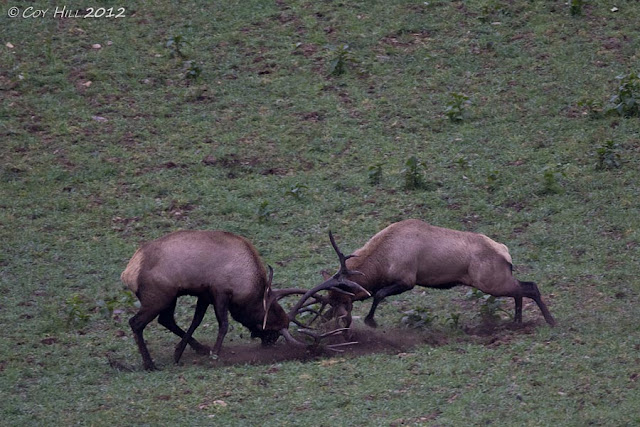 But even with his antler in the ground he was no match for his ferocious attacker. 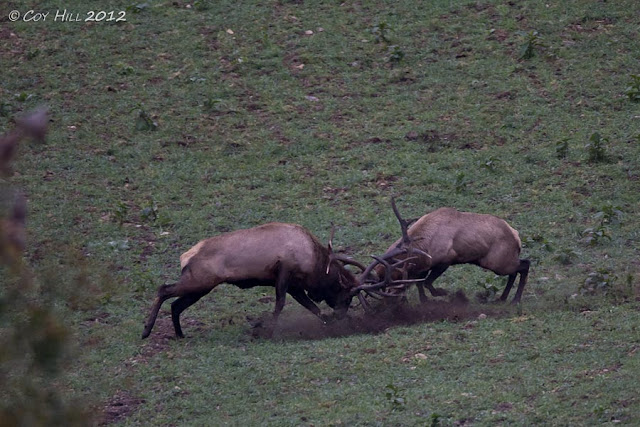 As the challenger pushed him out of sight behind the tree line.  This entire photo sequence occurred over a 6 second time span during which the victor pushed the defender about 100 yards down the hill. 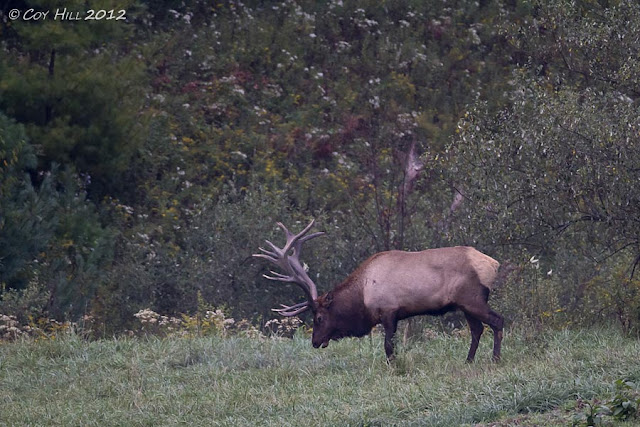 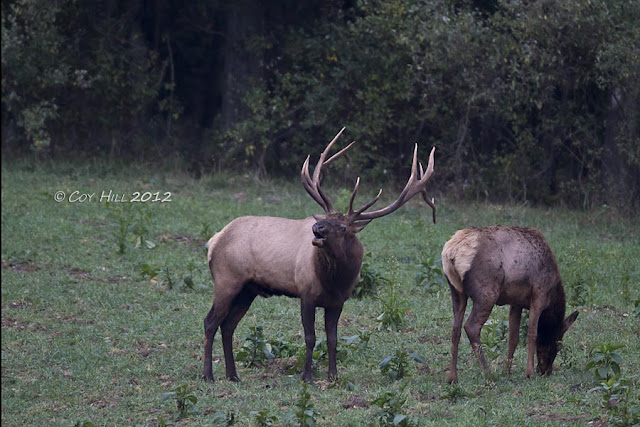 As the victor went back up the hill to claim his prize
The beaten bull rested a few minutes and then moved off into the surrounding woodland.  Shortly afterwards the victor bred the cow while we photographers stood in awe chatting about the incredible battle of "selection of the fittest" we had just witnessed.

I'd get ut of bed early any time to get shots like this!

Wow! I would love to see this in person. The photos are great!

Awesome! Great sequence, Coy. We were just discussing this morning about when to go down to the Missouri River to what is called "Slippery Ann", where we can go observe the Elk in action. However, no one is allowed to leave the road or approach the Elk. Fish & Game is there monitoring things.

Fabulous series! I get a head ache watching them. It appears his prize is not even taking notice. Fantastic images!

Amazing shots and the story line sure held my attention.Such huge animals battling it out must be amazing to watch.

Hi Coy ..
because I can only congratulate .. a really impressive post ...
fantstische images of the king of the forest ..
greetings Frank

Wonderful series! Your friend's introduction to Winslow Hill was certainly an eventful one! I suspect he'll be back again.