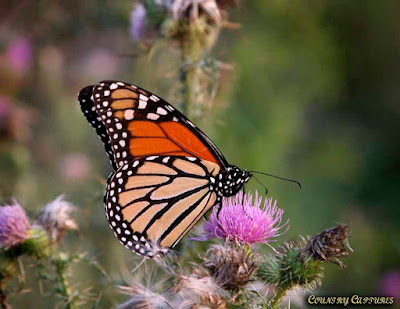 The Monarch captures my imagination with its beauty and grace. I love watching them flit from flower to flower in search of their favorite energy drink. As I observe the delicate insect I am amazed that this fragile creature has the ability to survive the long migration to Mexico let alone being able to return next year to begin their life cycle anew.

I work in a world of machines, large machines designed to lift heavy loads. As I look at this butterfly I am struck by the fact that man, with all of his engineering knowledge has never created anything as marvelous as this butterfly nor is he likely to anytime soon.

On one of my many evening strolls I noticed both Monarchs and Yellow Swallowtails passing both ways through a screen of pines. I followed their route and found a stand of thistle with a number of butterflies checking and double checking the blossoms in hopes of one last meal before nightfall.
Posted by Coy Hill at 8/30/2007 07:55:00 PM 8 comments:

Today I take the Lv2scpbk Challenge 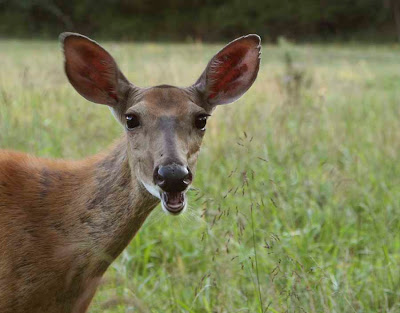 Lv2scpbk Barb stated in a comment on an earlier post, “Animals are great and they never take a bad photo”. I beg to differ with Barb and with today’s post I hope to prove my point. :) 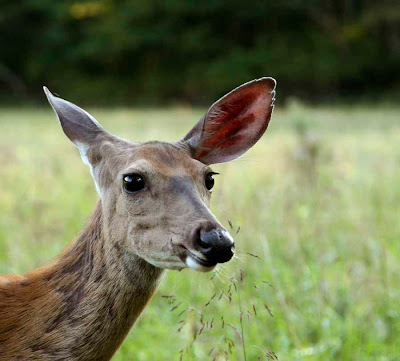 I have captured worse but for now these two photos must suffice as my entry for the “Bad Animal Expression of the Day.”

Thanks Barb for giving me inspiration for today’s post and for the rest of you my blogging friends if you haven’t visited Barb please do. I am certain that you will be glad you did. 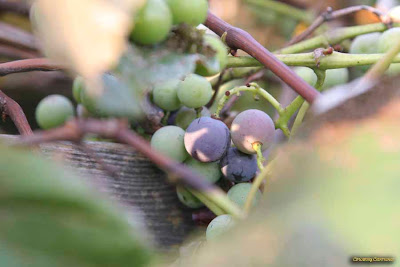 The ripening of my Concord Grapes brings back memories of my youth. We had a large Concord vine growing on an arbor along our farmhouse lawn. The grapes would begin ripening near the end of summer. It seemed they were always ready to eat by the first day of school. I remember my brother and I coming home from school and feasting on the delicious grapes.

Concord Grapes have a thick skin. The way we always ate them was to squeeze the grape while holding the stem end between our lips. The result was an explosion of flavor as the pulp popped into our mouths leaving the skin between our fingers.

As life goes, many years have passed since my school days and the old vine has long since perished.

When I moved to my current residence thirty years ago I planted two vines. I took this shot of them about a week ago and tonight while mowing the lawn I noticed that many of the grapes were ripe. The mowing had to wait as I again relived old memories. Childhood memories brought alive by the taste of those wonderful grapes. 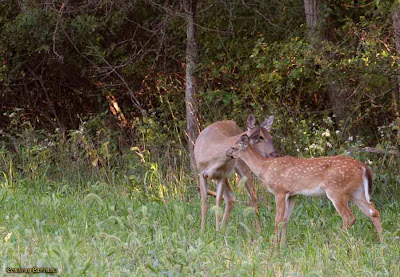 This evening I spent some quiet time with nature. A mother and child treated me to this capture as they tenderly groomed one another.
Moments such as these are rarely seen or appreciated by “consumptive only” users of wildlife.
I am reminded of the wildlife criminals I have dealt with. Although that part of my life is now in the past, still I can find no compassion in my heart for them.
Posted by Coy Hill at 8/27/2007 08:53:00 PM 10 comments: 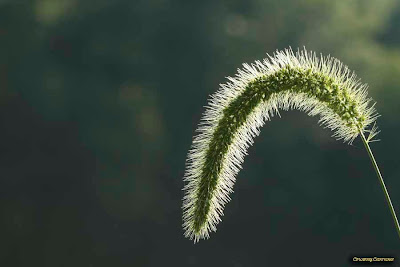 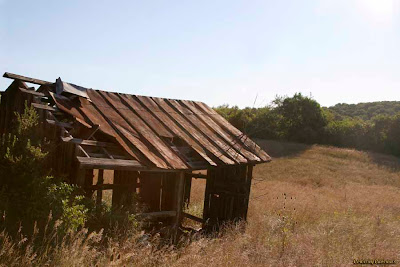 I had not originally planned on posting this image. At the request of my faithful cyberworld friends Mike and Photowannabe a minor change of plans was required 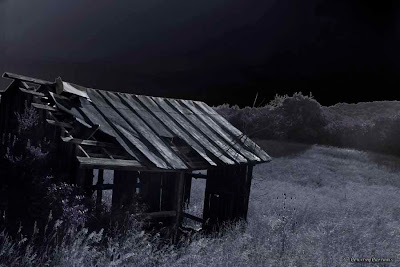 The possibilities for this image of an old forgotten shed captured my imagination.

This image was shot in the morning sunlight and manipulated digitally with Photoshop to achieve a “Moonlight” effect. 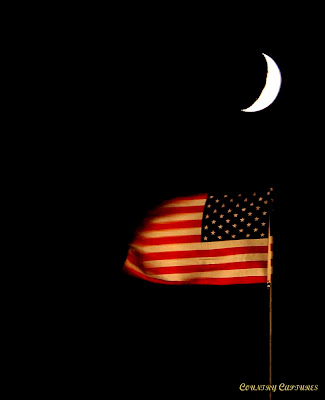 While I was photographing the Lawnmower Races my wife noticed this scene and drew my attention to it. I was too engrossed with the little tractors to notice a “Country Capture” begging to be photographed. 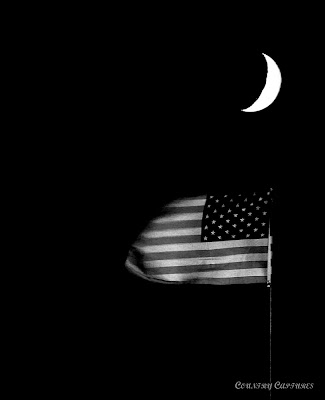 I cannot decide between the color or the B&W version. Please comment with your choice. 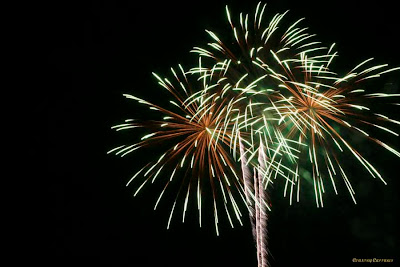 Friday night at the County Fair was my first ever attempt to photograph fireworks.

I captured this image handheld with a .8 second shutter speed. I’m sure image stabilization helped me considerably. The next time I'll be sure to have a tripod and use a longer exposure. 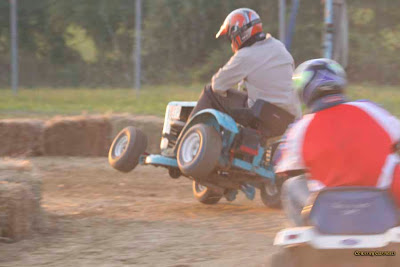 The tractors in this race are not your “Backyard” variety lawn mower as evidenced by this shot. This driver did successfully navigate the turn although one of his fellow racers did a flip here but only after the light levels had dropped to low for photography. 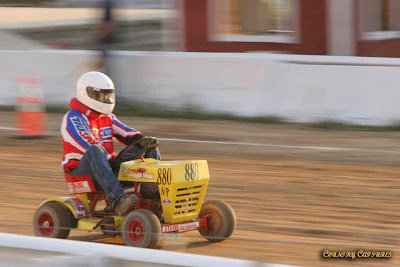 Some of these little tractors really fly. I have heard that some are capable of 70-80 mph although on this short track I don’t believe any approached these speeds.

I captured this shot set on a 1/50th shutter speed along with having the autofocus set on servo to give the background a pleasing amount of motion blur while maintaining subject sharpness. 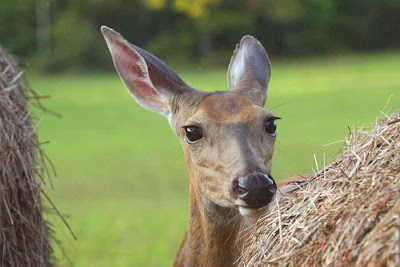 At our new address: 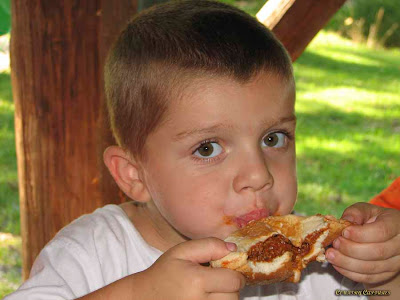 Remember when we were young? For some of us it has been more years than for others but fond memories always linger on. Great food along with family and friends, jokes, stories, and good conversation are not soon forgotten. Family picnics create memories that last a lifetime.


Logan, pictured here, is just beginning to fill his storehouse of memories while at the same time giving us older folks new ones along with refreshing our memories of our own childhood long past.
Posted by Coy Hill at 8/15/2007 09:09:00 PM 2 comments:

When you got an Itch…… 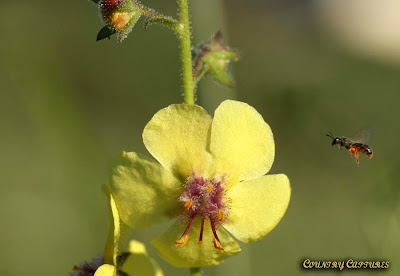 A hungry little bee flew in to feed while I was photographing this pretty yellow meadow flower. The bee changed this photo from just another pretty flower shot into something special. 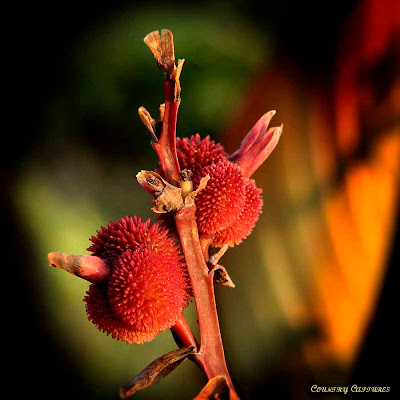 A macro photograph taken using a large aperture translates this
ordinary scene into an object of brilliant beauty
Posted by Coy Hill at 8/10/2007 08:25:00 PM 6 comments: 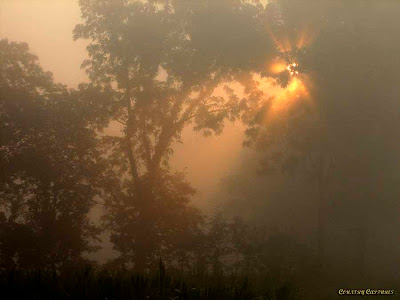 Recently we have been experiencing a heat wave with temperatures soaring into the upper 90’s and with the heat index exceeding 100. Our beautiful mountains stand shrouded in haze.

At a time when scenic photographs of large vistas was impossible I captured this shot as the sun was burning through the heavy morning fog that cloaked our valleys. 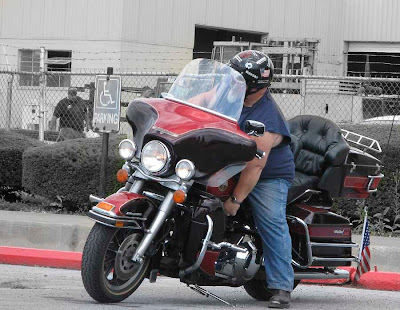 After a hot day of working in the factory a Harley Ultra Classis is just the ticket for a refreshing ride home.

The Big Bad Biker pictured is known by all of his friends as “Tiny”.
I don’t suppose anyone can guess why

The Way of the Wild 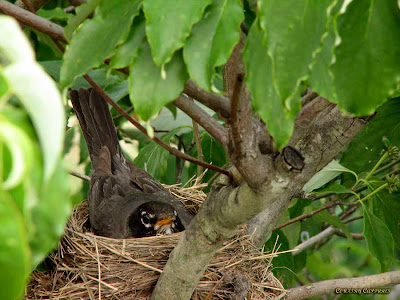 Recently I discovered a robin nesting in the dogwood tree that grows alongside my deck. I was thrilled that this would give me the opportunity to photographically document the baby’s development. 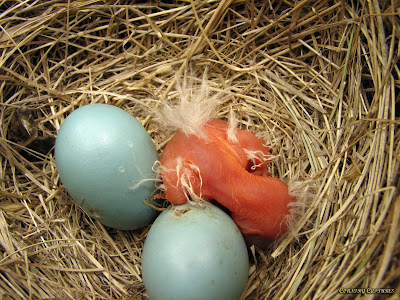 Sunday morning July 29th one egg had hatched. I photographed this baby that evening. The other two eggs have tiny holes pecked through. Sadly these two babies died before they could break free of the eggs. 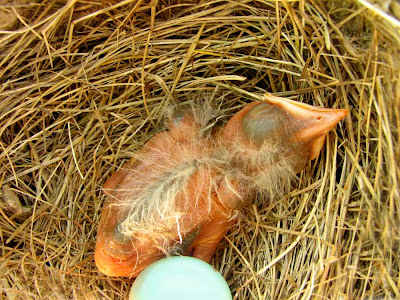 By Wednesday August 1st the little robin had more than doubled in size. 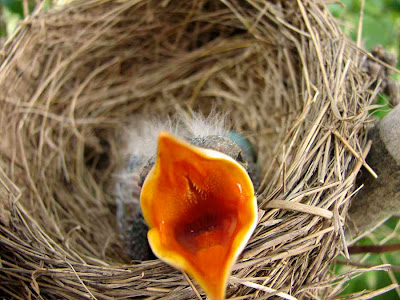 On Saturday August 4th the baby had grown much larger and was becoming covered with feathers. Any disturbance about the nest would cause it to hungrily open its huge mouth. 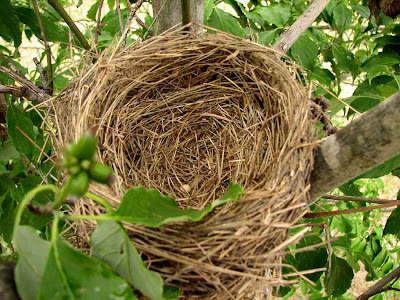 This morning I went out to photograph the baby on its one week birthday only to find it and the remaining unhatched egg gone. If only the baby had been missing I would have assumed it had accidentally fallen from the nest but with the remaining egg also gone I believe it is safe to assume the nest was raided by a predator during the night.

Such is The Way of the Wild

Some must Die that Others may Live 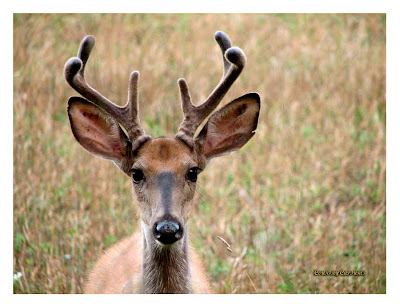 During summer a whitetail’s day consist of feeding, resting and shaking off flies. The frantic days of the rut are still a few months away and the winter’s cold even farther.

I encountered this young buck as he was leaving the fields in early morning. After a night feeding in the dew covered meadows he is ready to spend a restful day laying up in the cool shade of the forest. I was pleased that he took a moment from his “busy” day to pose for this photograph.
Posted by Coy Hill at 8/03/2007 06:07:00 PM 9 comments: 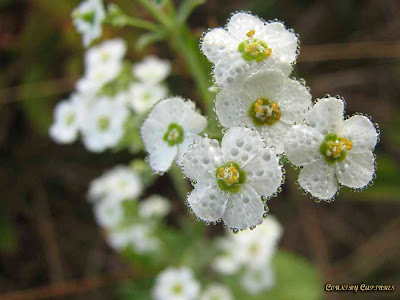 As those of you who frequent this blog already know early morning is my favorite time of day. Beautiful sights not present at any other time reward those who rise early.

Today as I browsed through an overgrown meadow before the sunrise I found these tiny wild flowers which are about the size of a pencil eraser. As I looked closely at them I was awed by the delicate lace formed about them by the dew.

In my search for beauty I have learned to slow down and look closely. Beauty is everywhere!