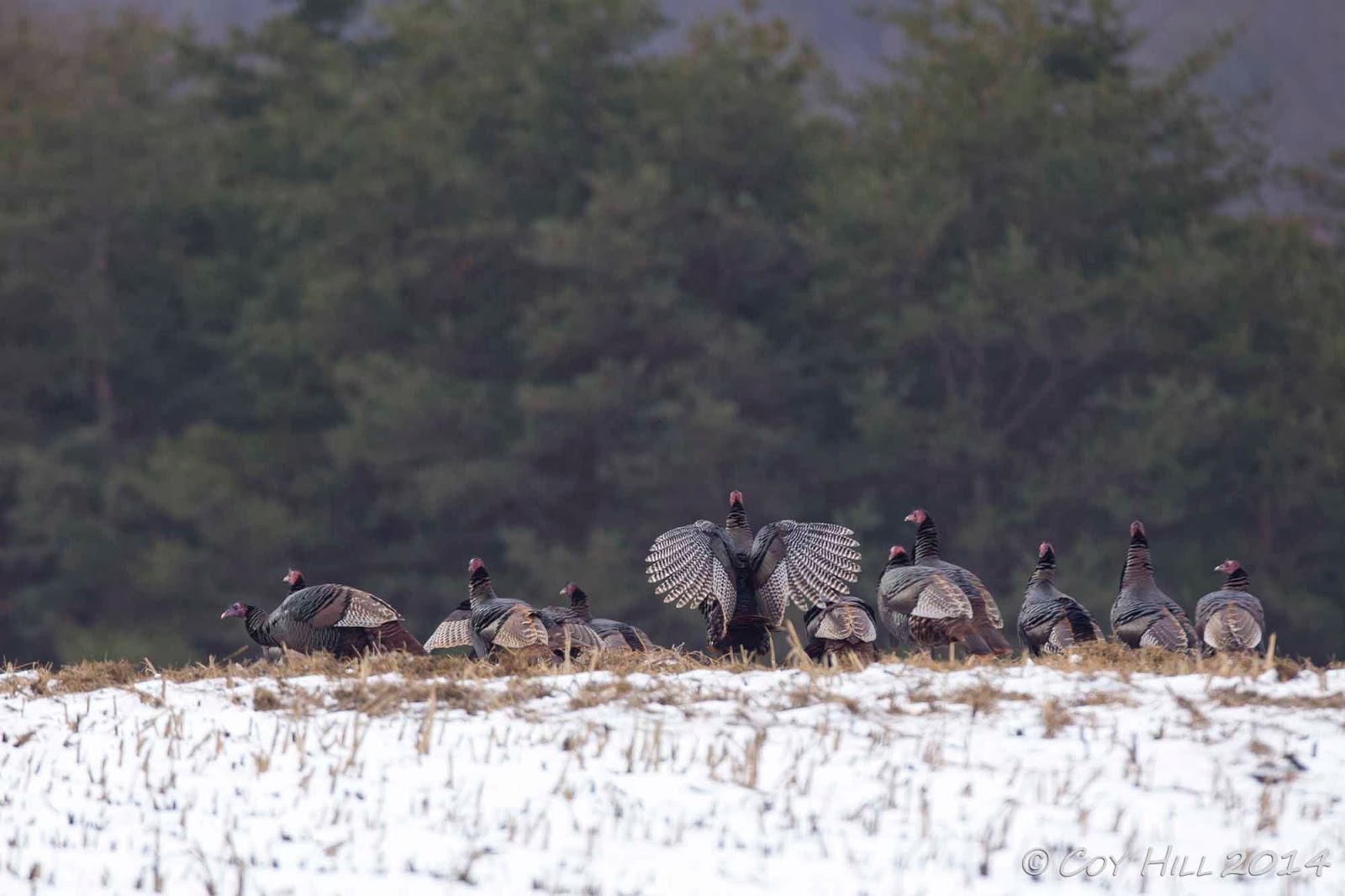 Each season presents wildlife with its own set of challenges; during the short cold days of winter finding adequate food and shelter is challenge enough.  The predominately oak forest in my region usually produce an acorn crop that many species including wild turkey depend upon for winter forage.  With the 2013 acorn crop a bust, this flock of turkeys has located a field where a local dairy farmer has spread manure.  While cow manure does not sound appetizing to us, the bits of undigested grain it contains brings these big birds back for a daily life sustaining meal. 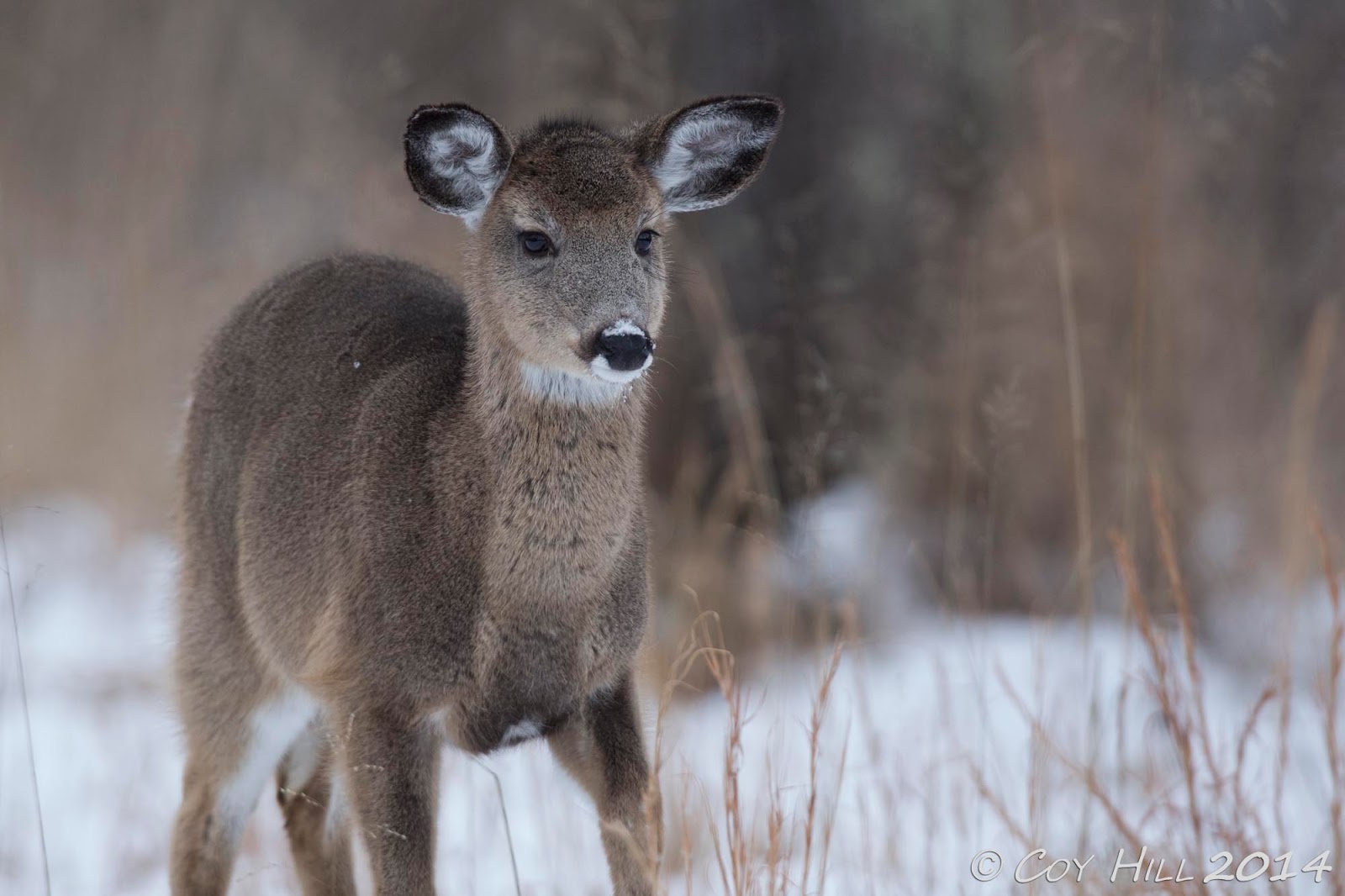 While deer have no choice but to stay out in the cold, they do have ways of coping with the chilly temperatures.  During cold windy weather deer will seek out thermal cover, vegetation that breaks the wind.  On cold sunny days they will often be found on southern exposures where the warming rays of the winter sun makes the day much more tolerable.  In addition to utilizing protection from the terrain, deer also have the ability to make their insulating coats thicker or thinner.  This deer, photographed on a morning when the thermometer read about 10 degrees, has its coat fluffed for maximum warmth. 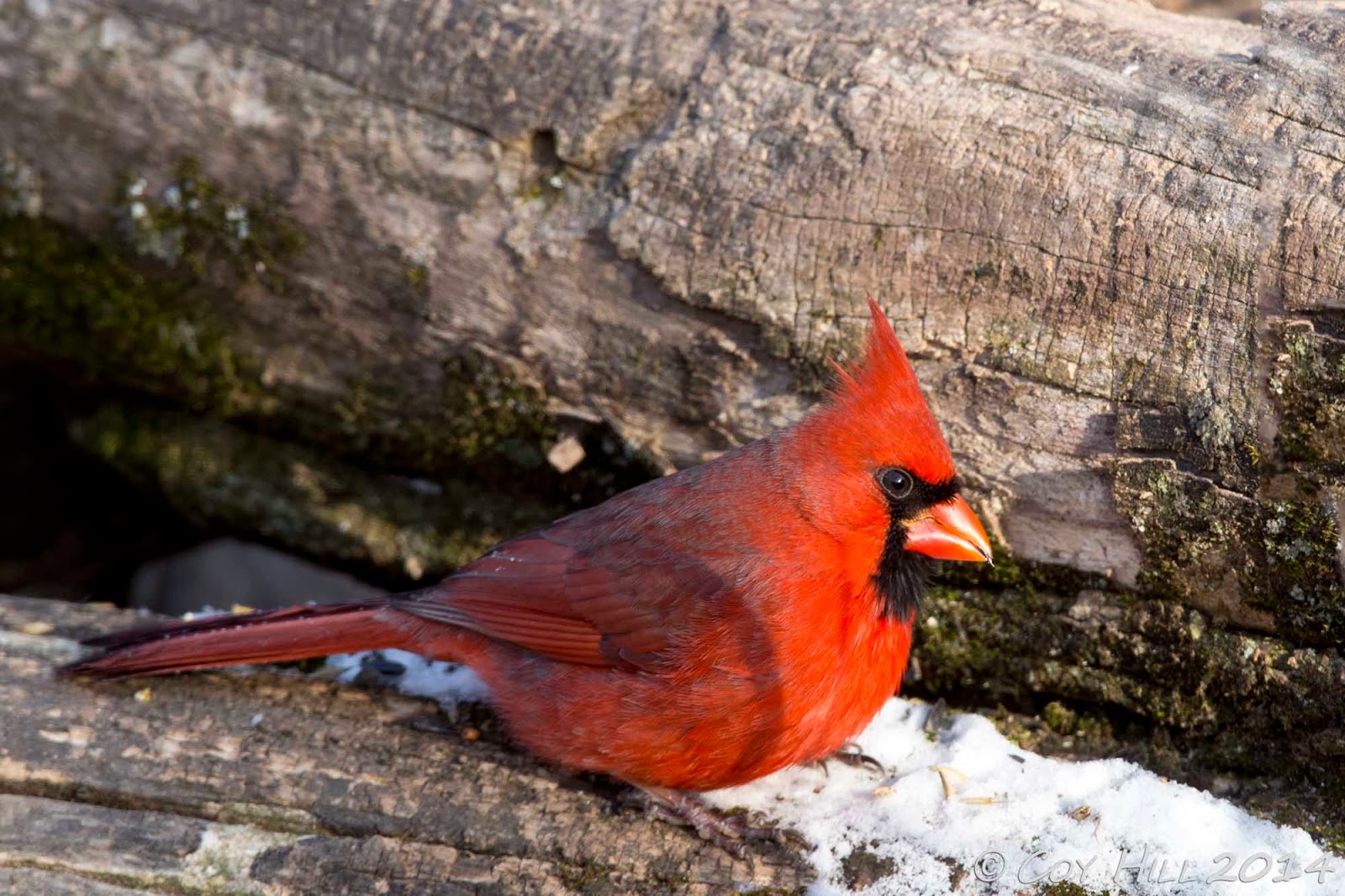 Humans can play a considerable role in the winter survival of some species.  Many songbirds depend upon backyard feeders to supplement their diet with high calorie foods such as sunflower seeds and suet. 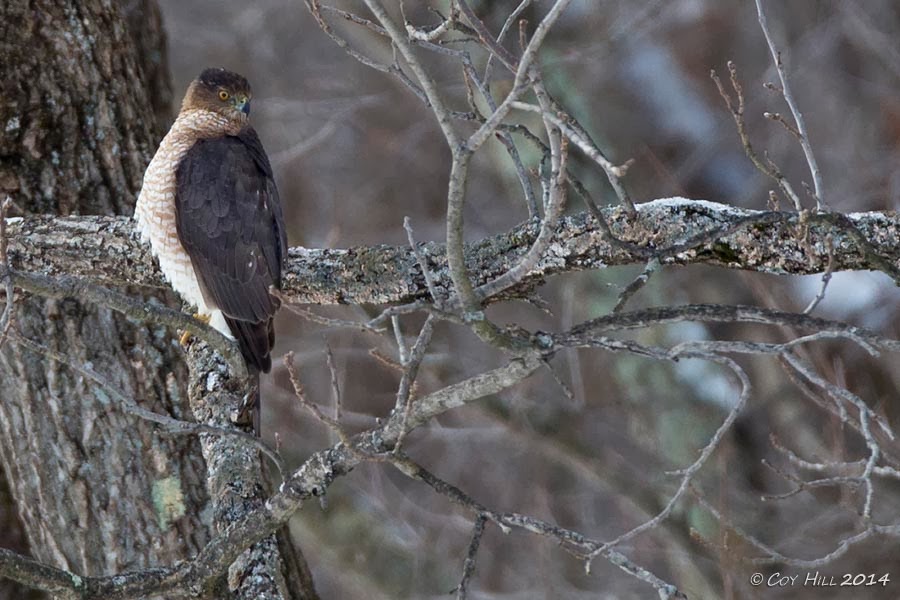 In a sometimes undesired way, backyard bird feeders also provide a ready food source to predator species.  This coopers hawk, with breast feathers fluffed to ward of the chill, watches intently for its chance at an unwary bird. 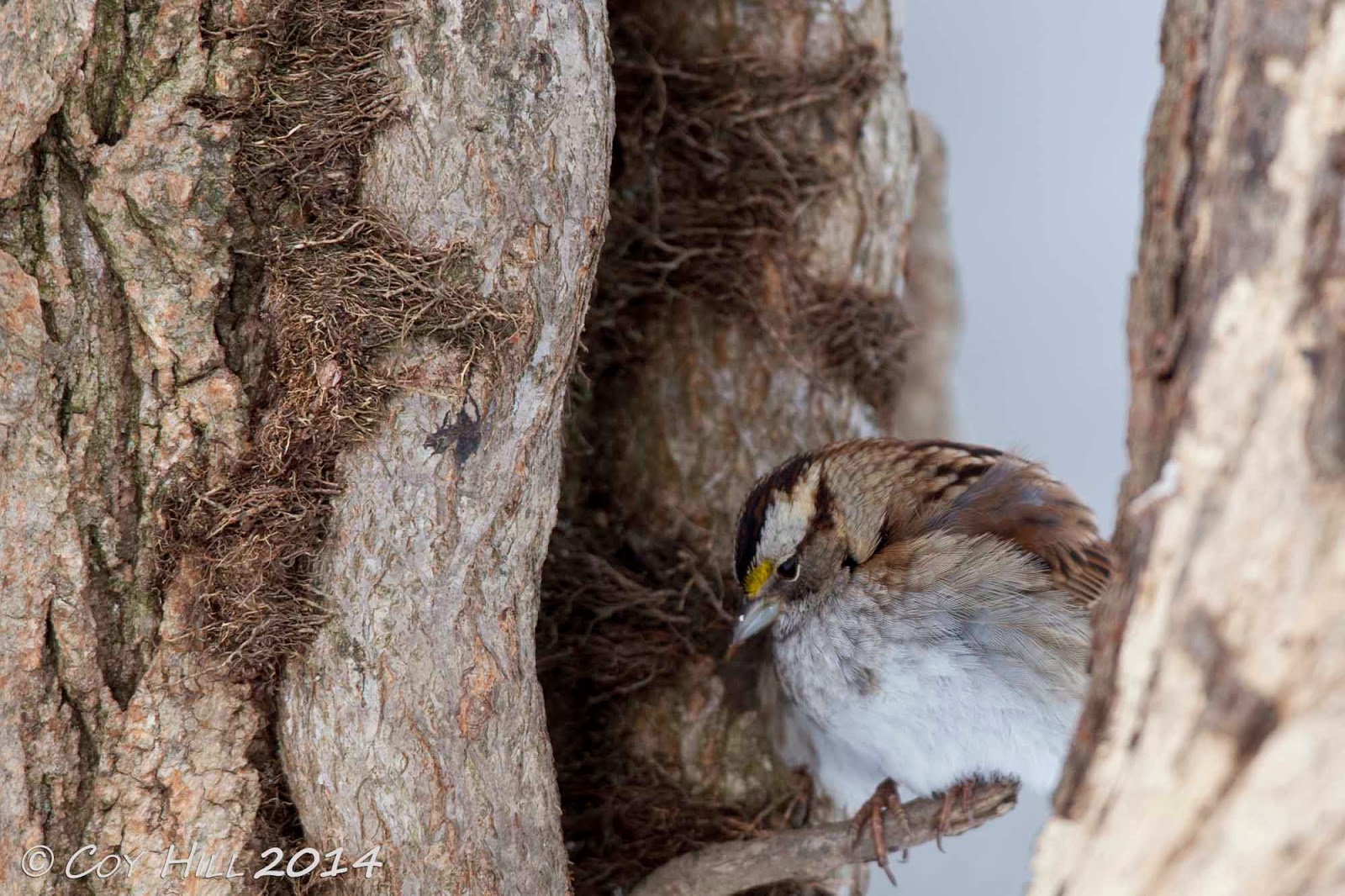 In the ongoing cycle of life, the stress of winter removes the old, the weak, the infirm, and the unwary.  In death they in turn become food for the predator and scavenger species continuing the unending cycle of life and the continuous evolution through survival of the fittest. 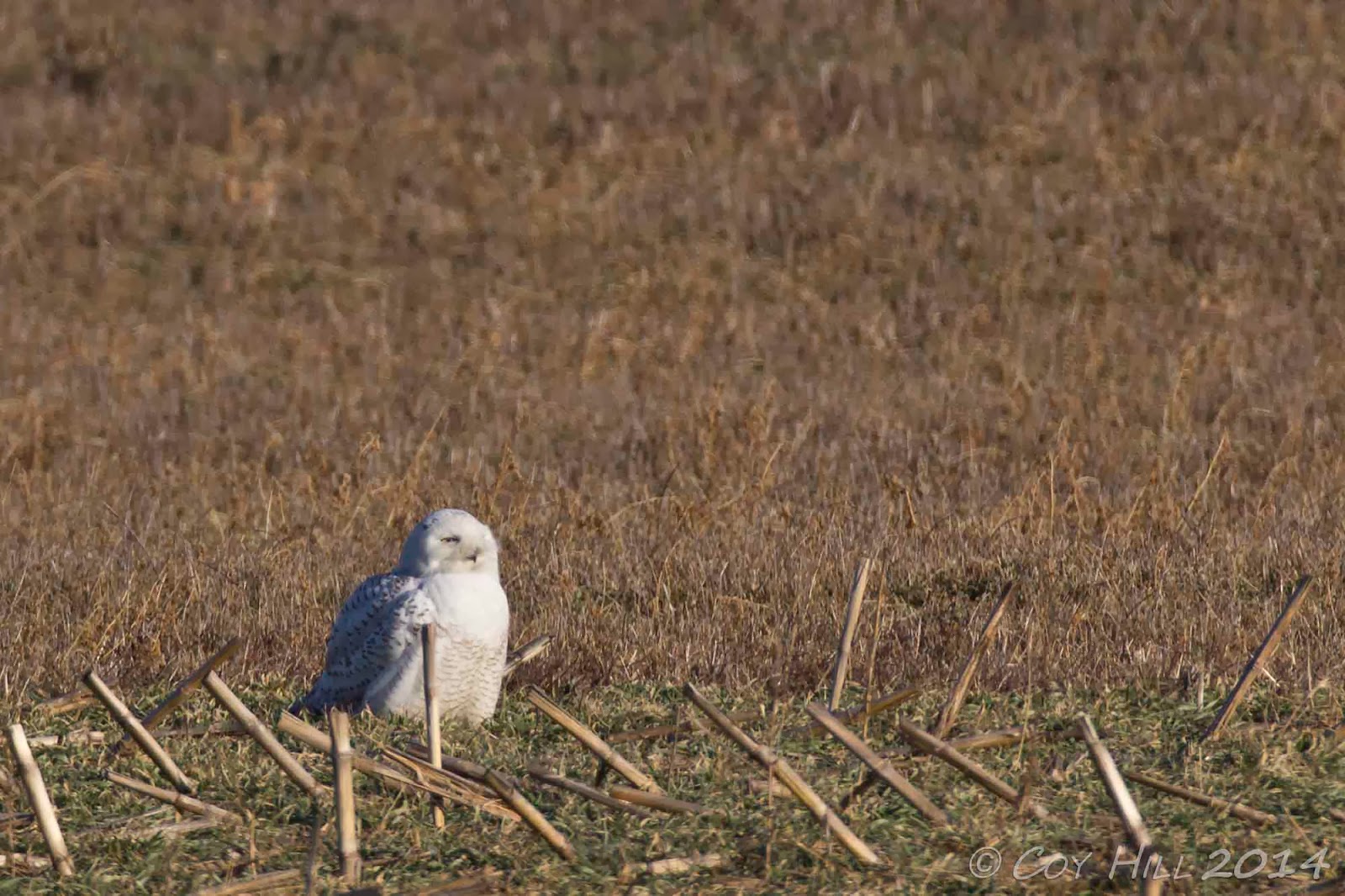 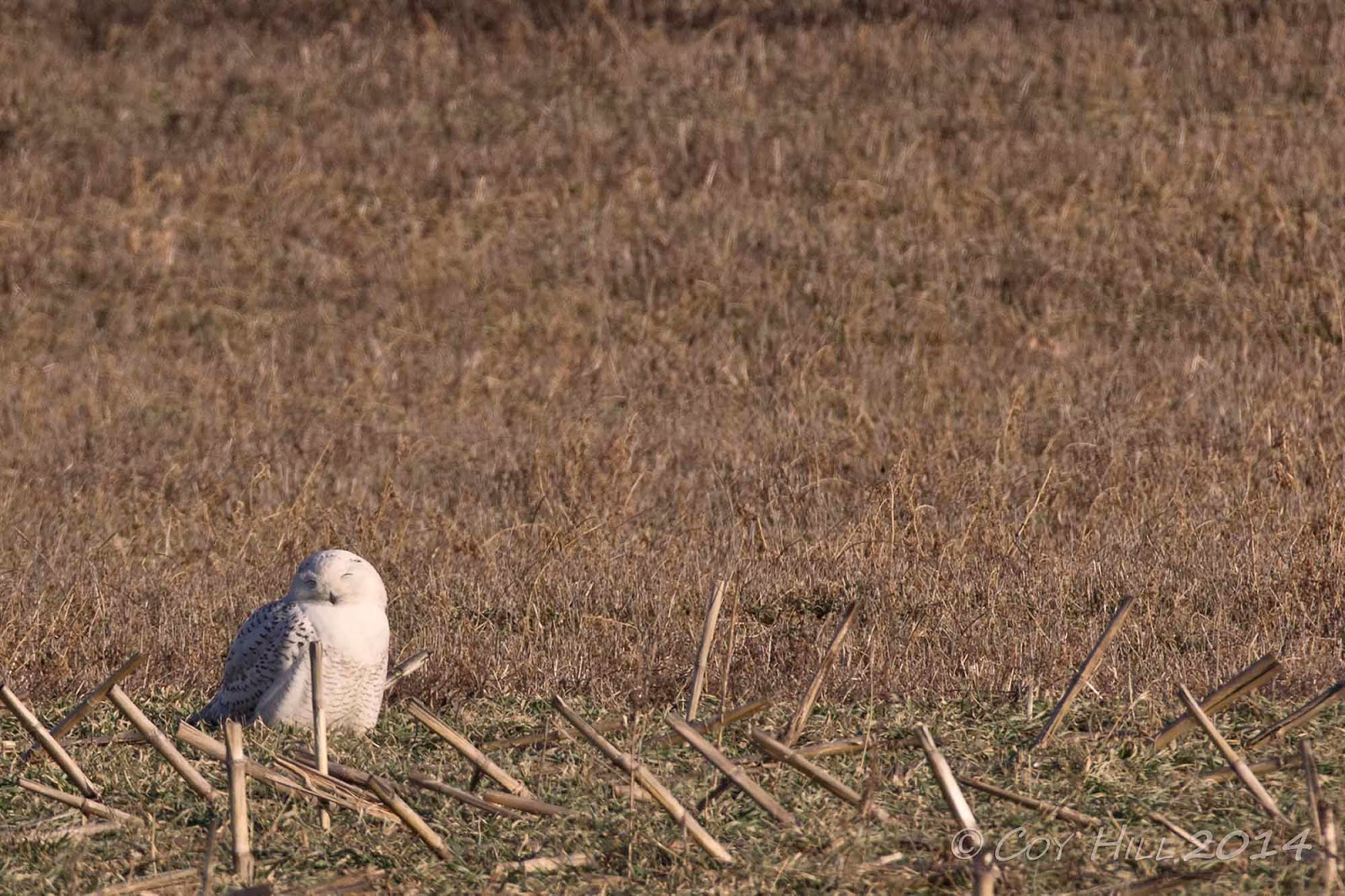 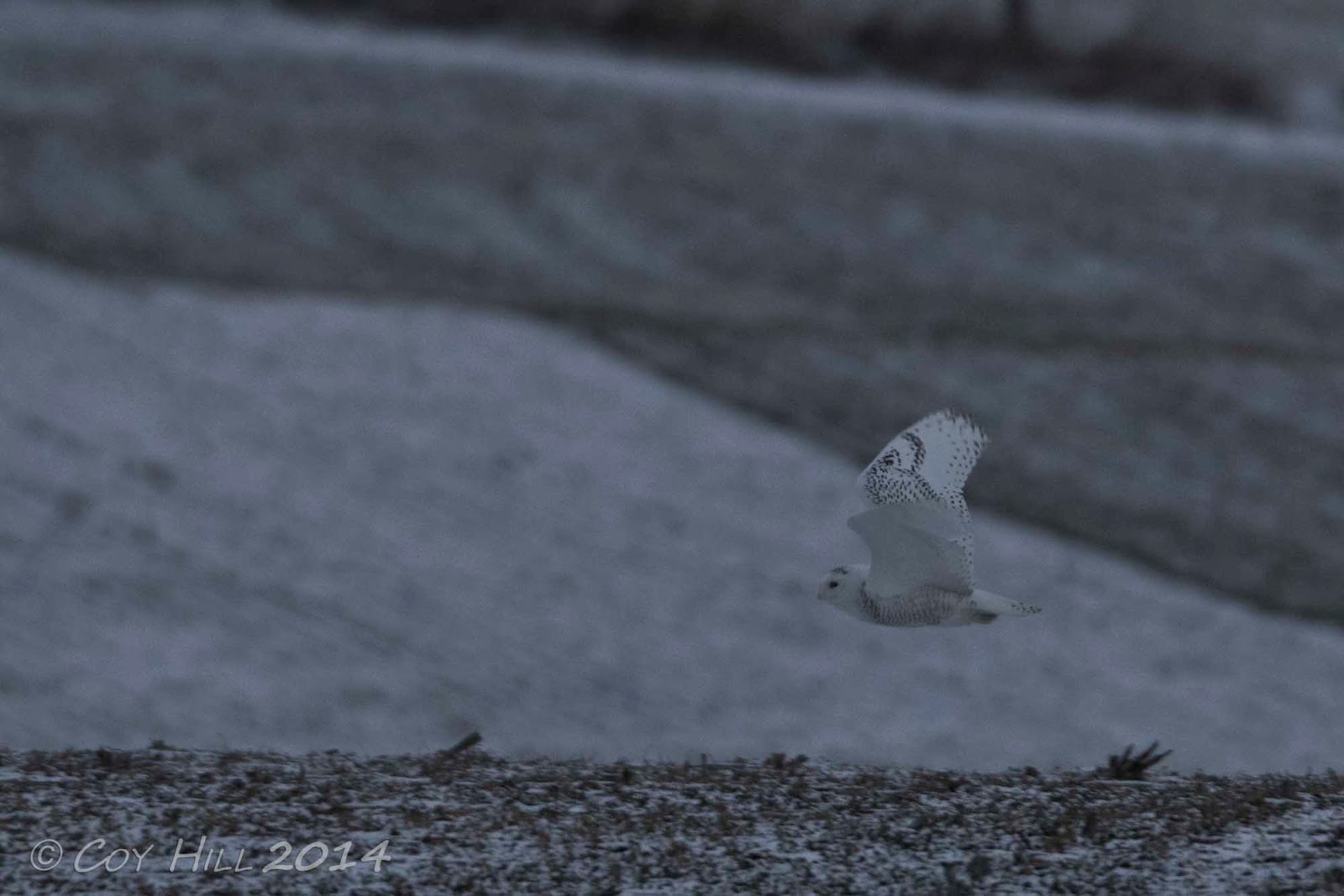 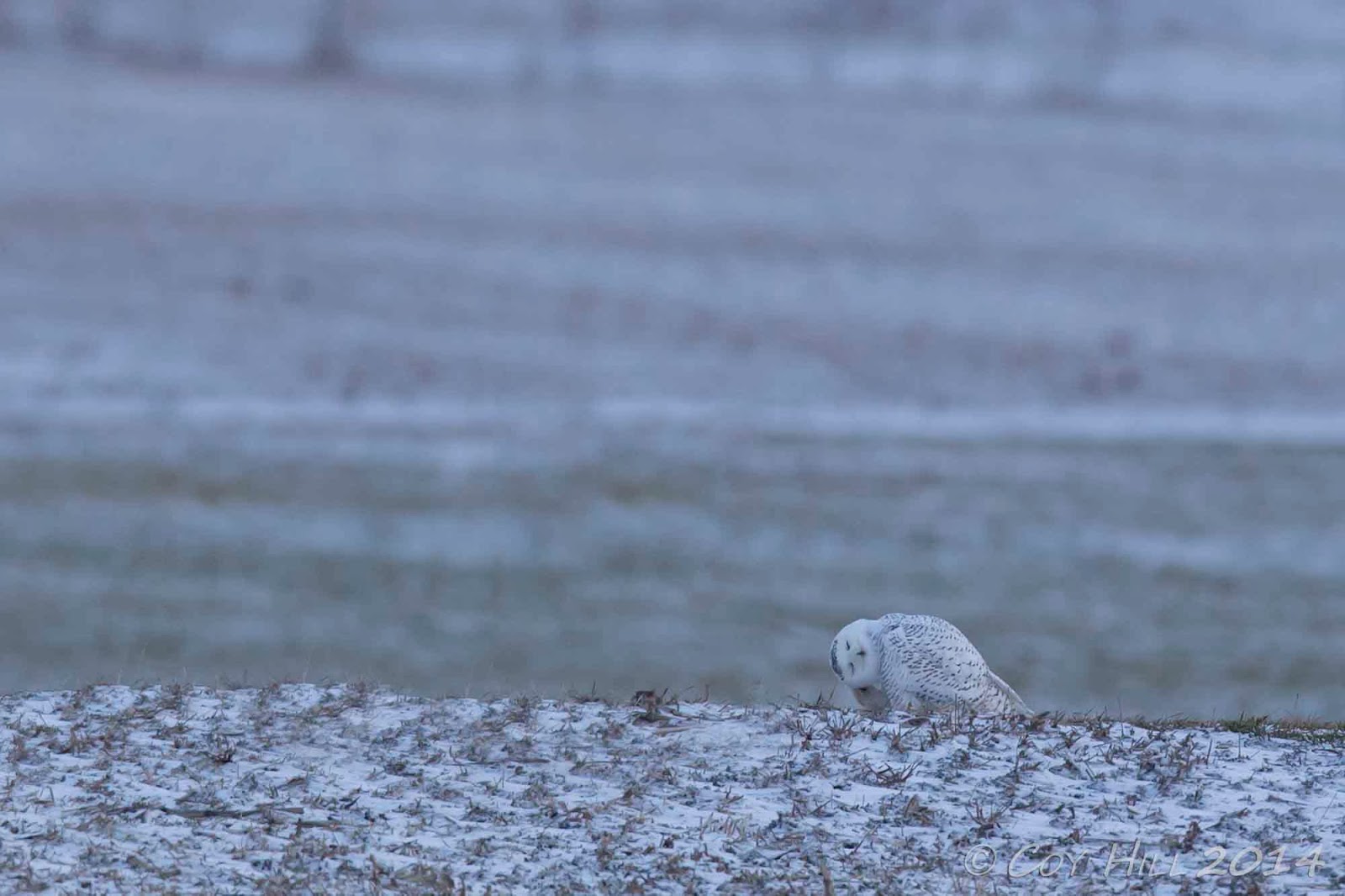 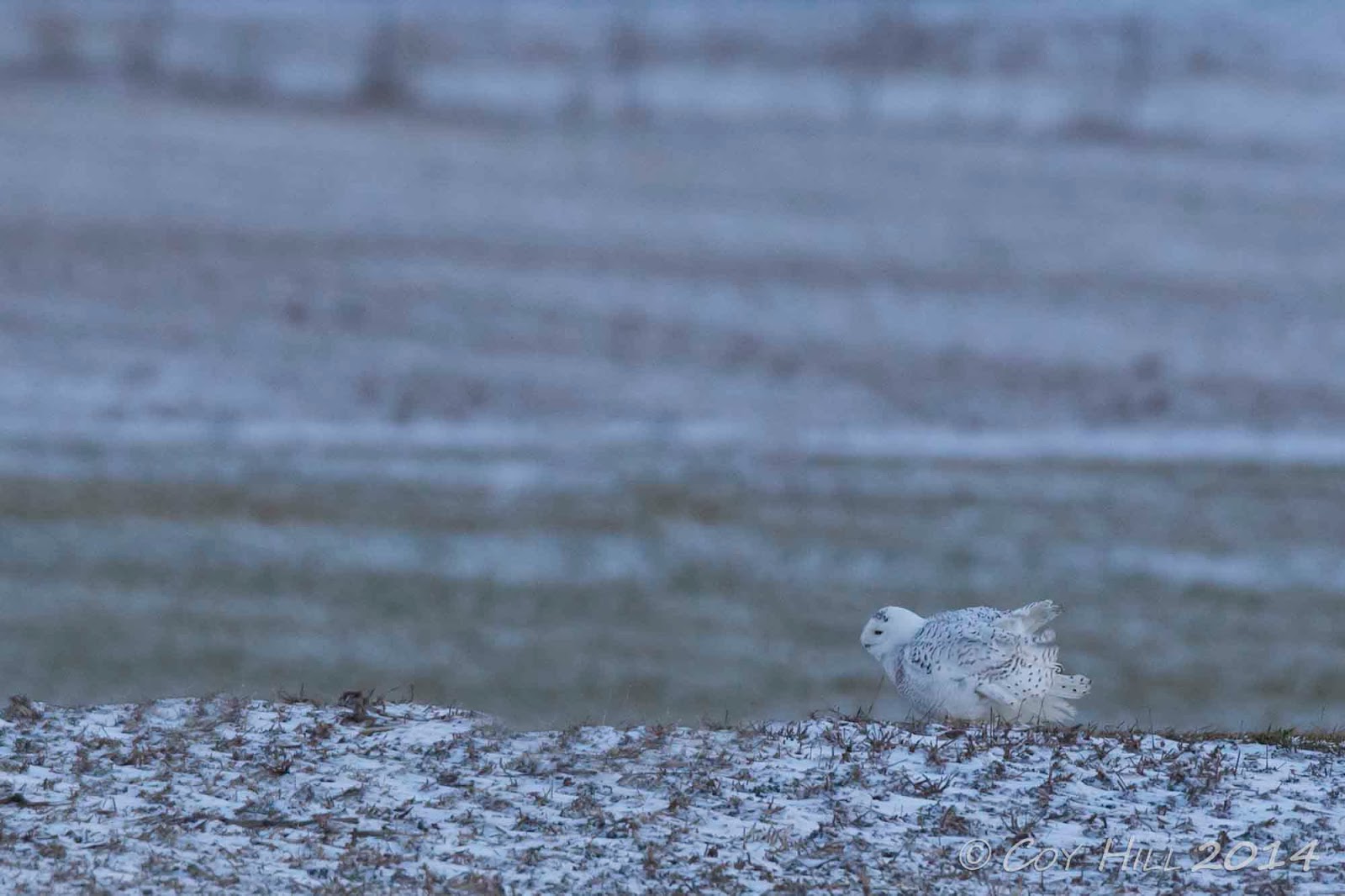 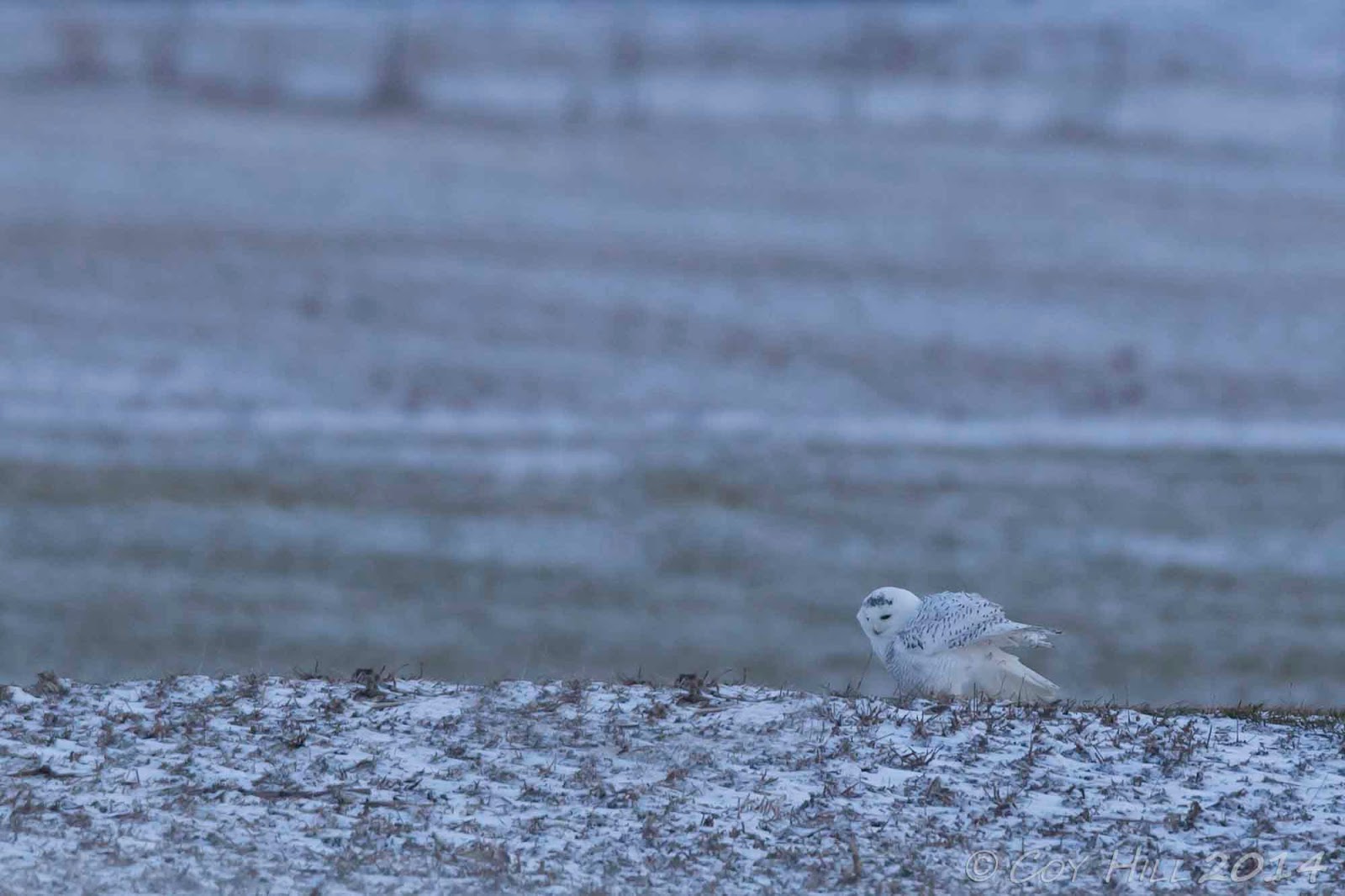 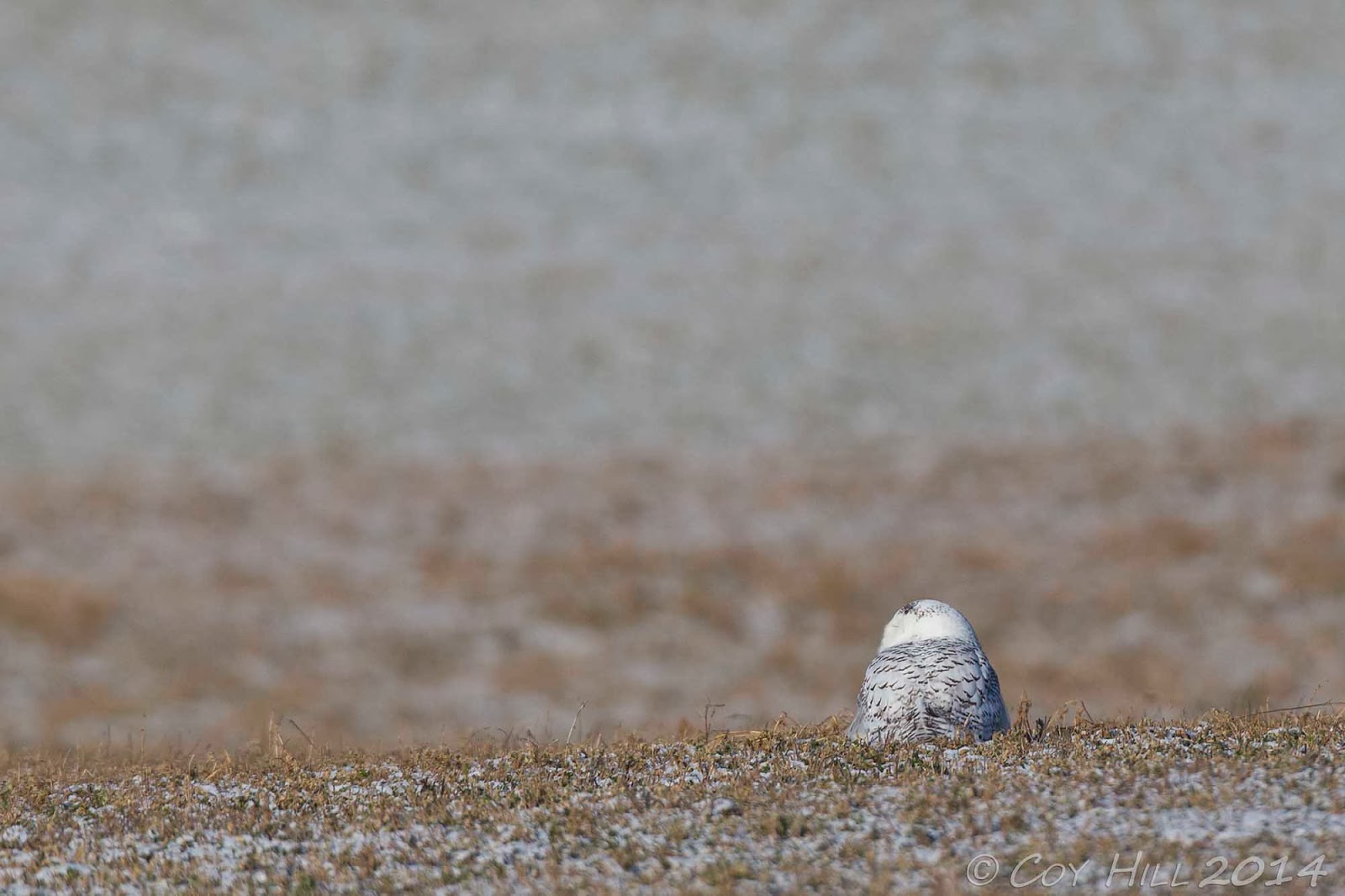 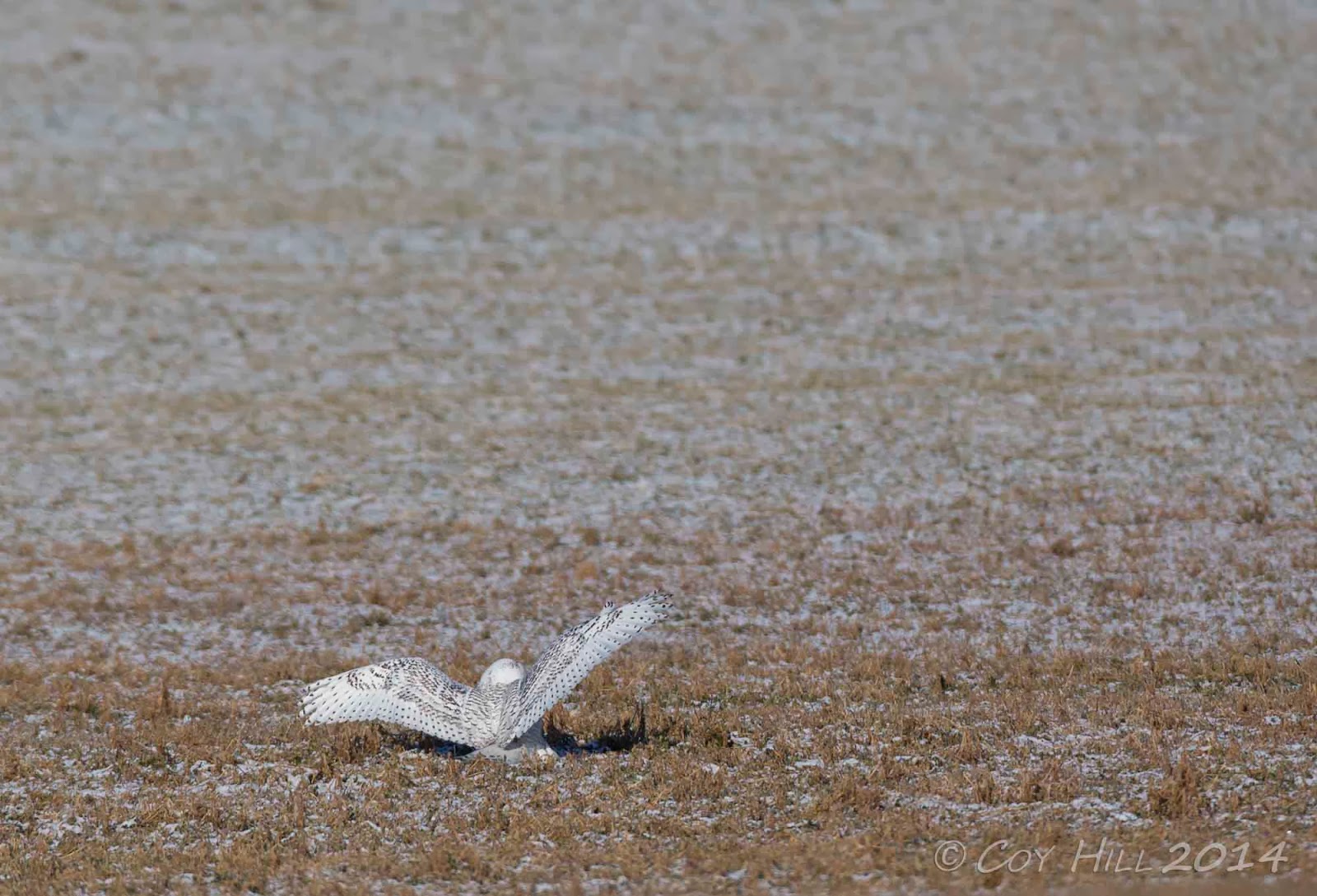 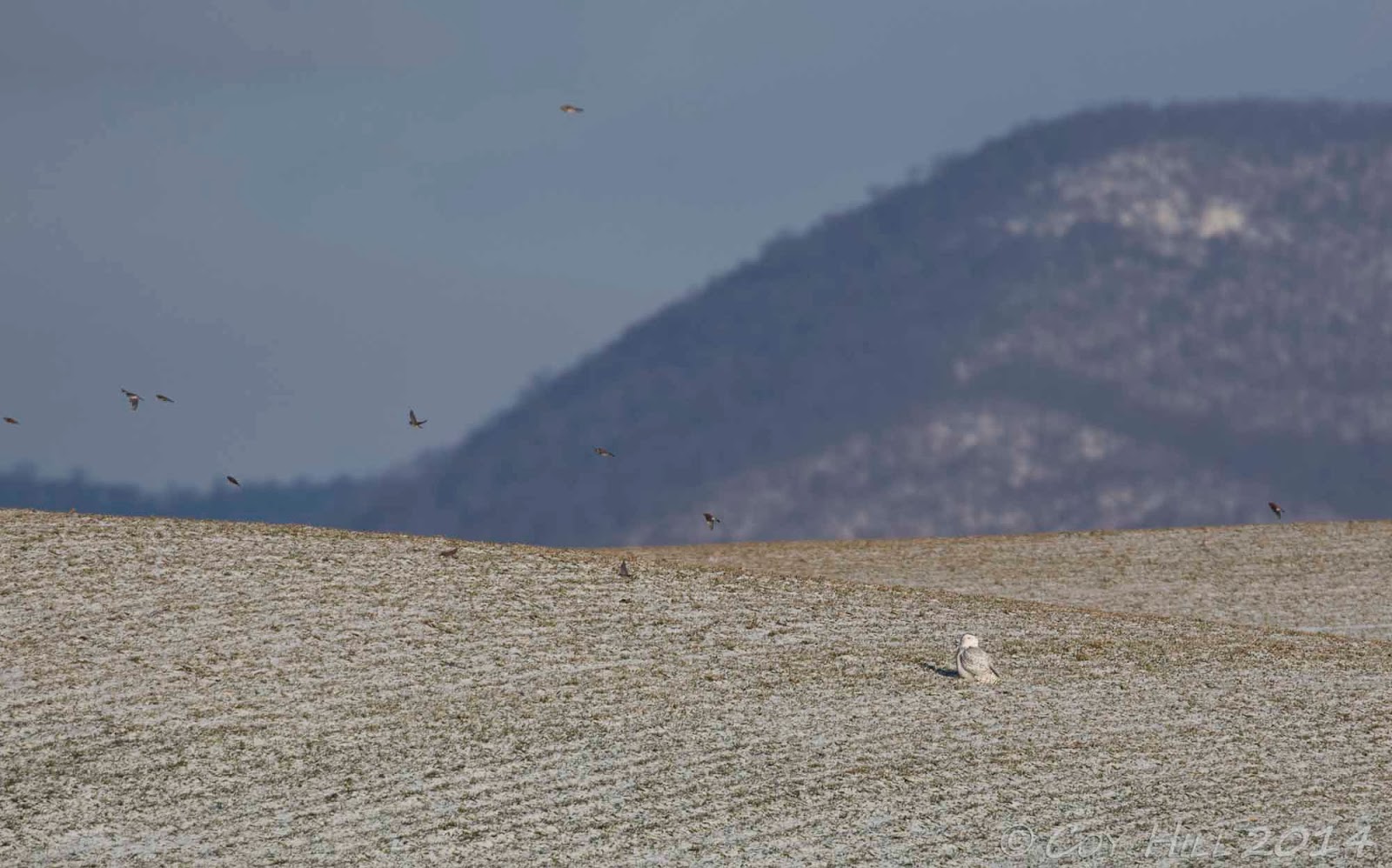 While reading about this unusual owl irruption on the web I ran across an ongoing snowy owl migration study called Project SNOWstorm, a study involving GPS tracking.  Currently three owls have been fitted with transmitters and are mapping their travels.
Posted by Coy Hill at 1/18/2014 02:58:00 PM 12 comments:

With the local whitetail activity at a low point and the ground remaining free snow for the most part, I have been spending my free time catching up on things around home.  In the midst of all my catching up I  realized that I had not posted to Country Captures in nearly a week!  Sometimes a fellow just can't win!
Since I have not been shooting much new material lately it is time to step back, and this time step back to one foggy late September morning on Winslow Hill and revisit the mature bull elk, Limpy, as he pursues a cow waiting for that moment that she will accept his advances. 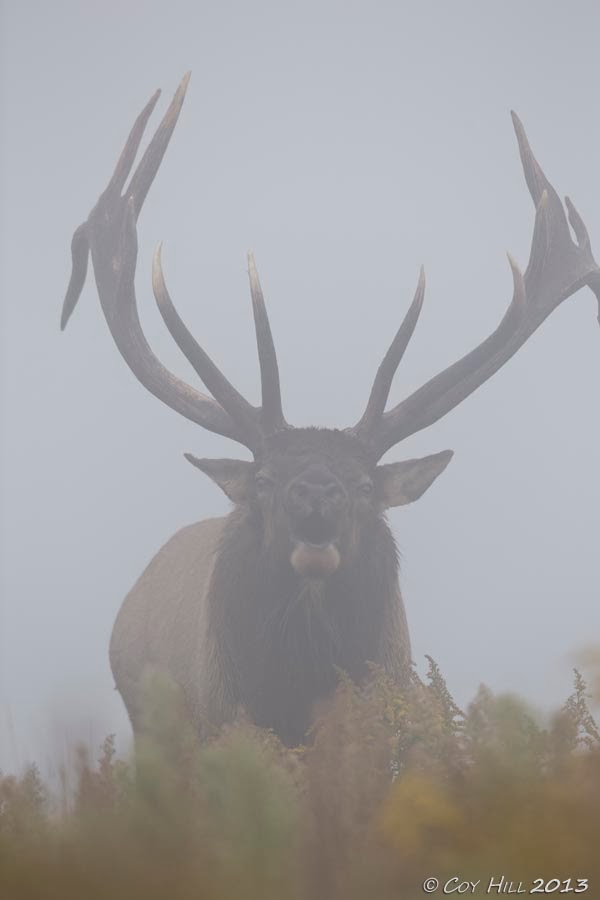 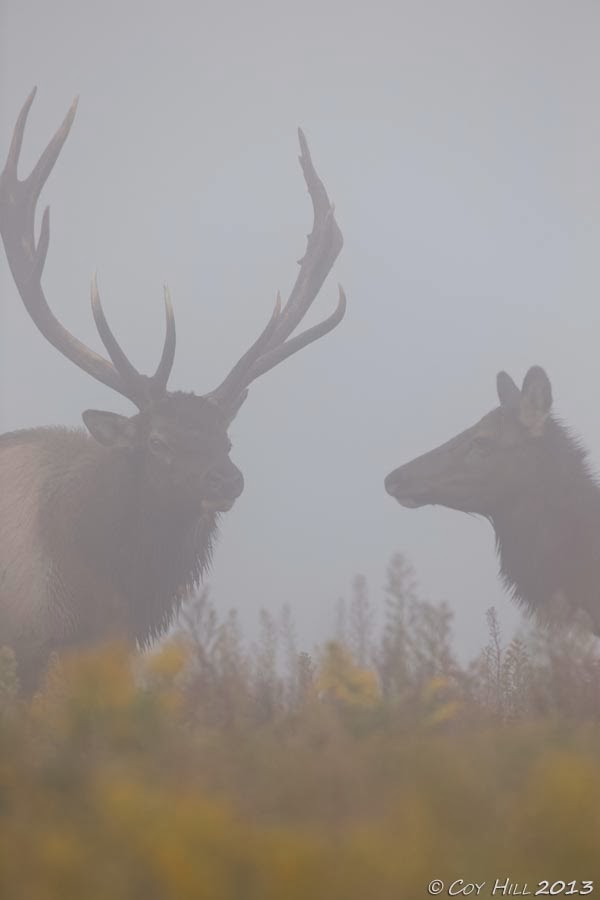 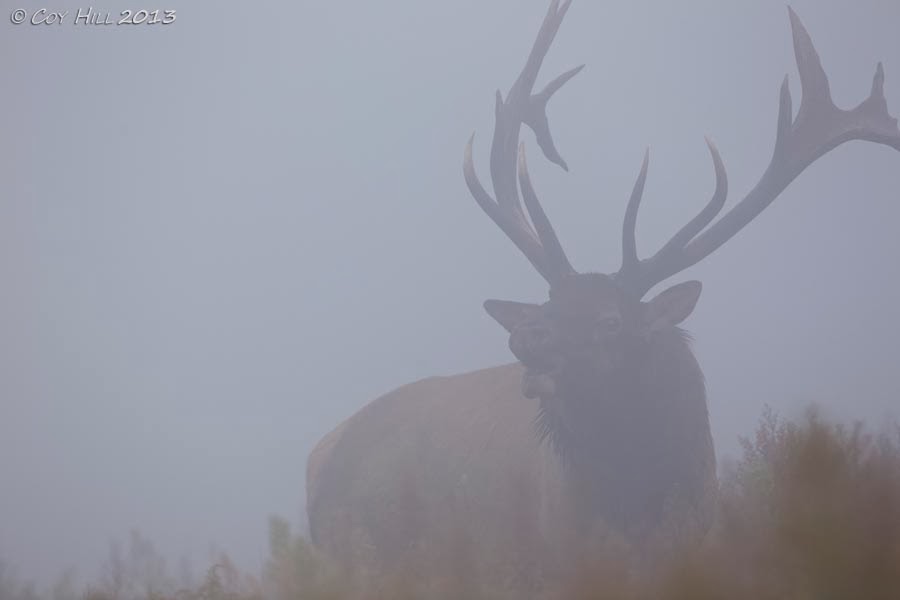 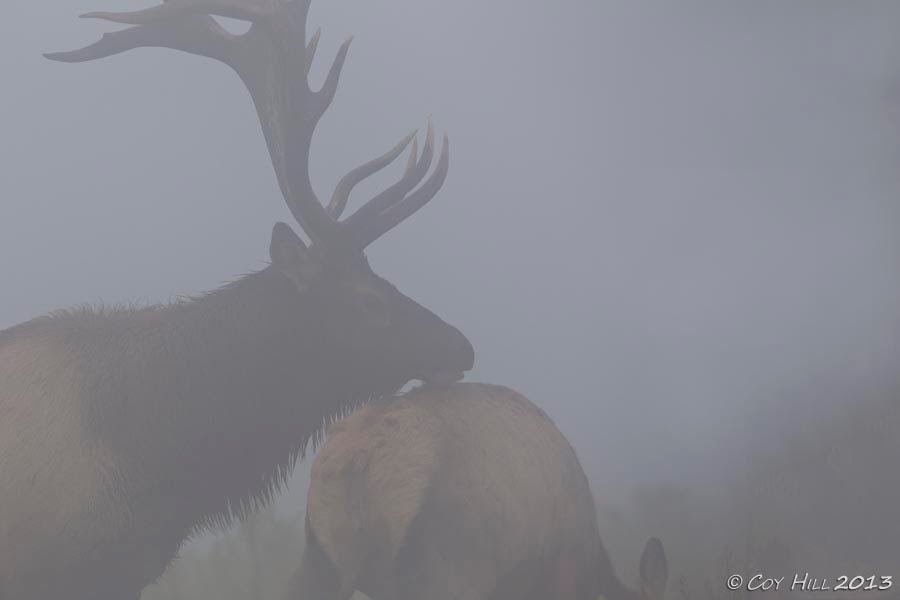 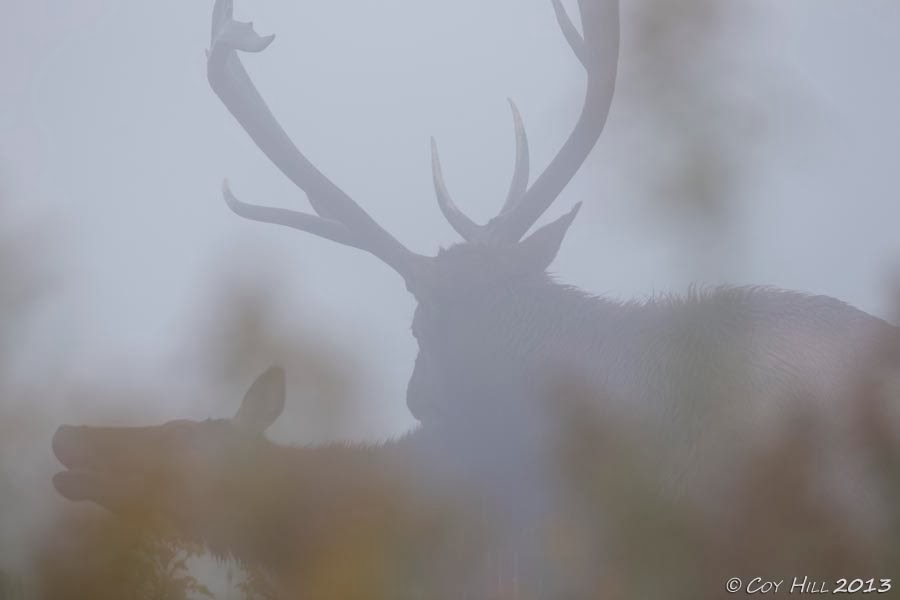 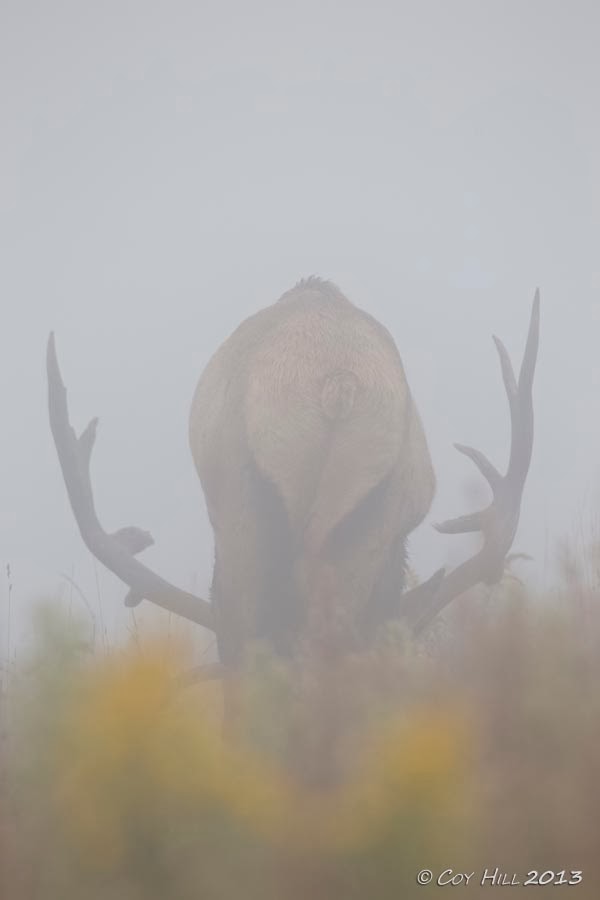 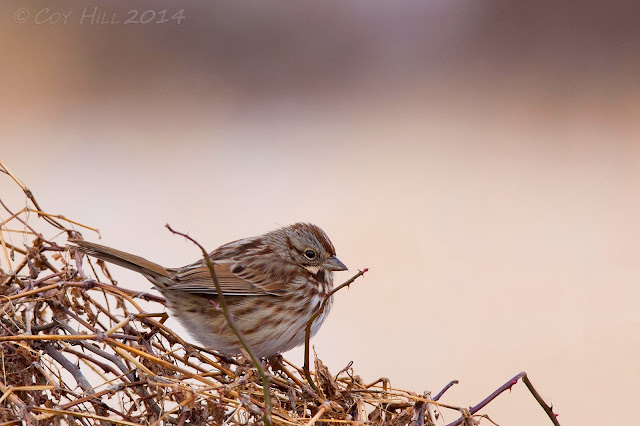 Song Sparrow
Feeders will draw birds for easier viewing all year long but when snow blankets the ground birds will descend on established feeders in droves.  Provide a variety of natural or natural appearing perches nearby that takes advantage of the natural light and you will have a perfect winter bird studio. 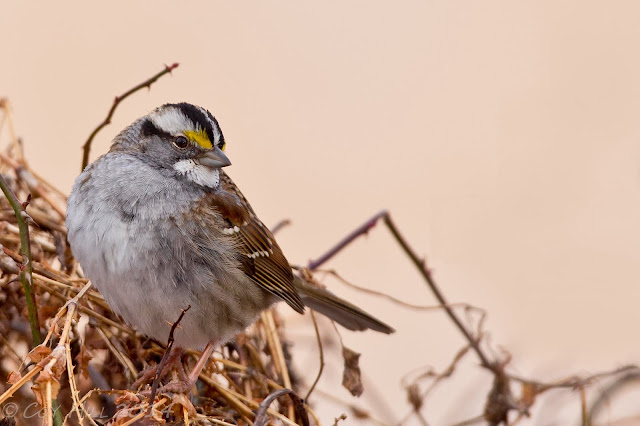 White-throated Sparrow
The song sparrow and the white-throated sparrow in the above photographs both posed for me today on a multi-flora rose bush overgrown by an unidentified vine. 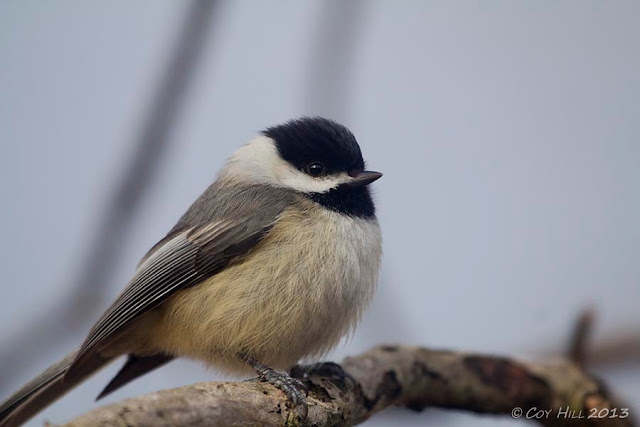 Black-capped Chickadee
A tree standing beside the feeder provides a multitude of branch perches such as the one used by the above chickadee. 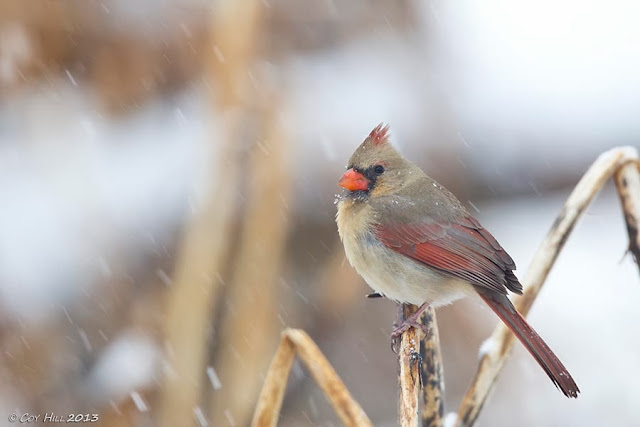 Female Northern Cardinal
This female cardinal perched on a broken poke stalk during a snow storm.  I am particularly fond of poke weed growing near my bird feeding areas as it not only provides a good variety of photogenic perches but feeds the birds as well. 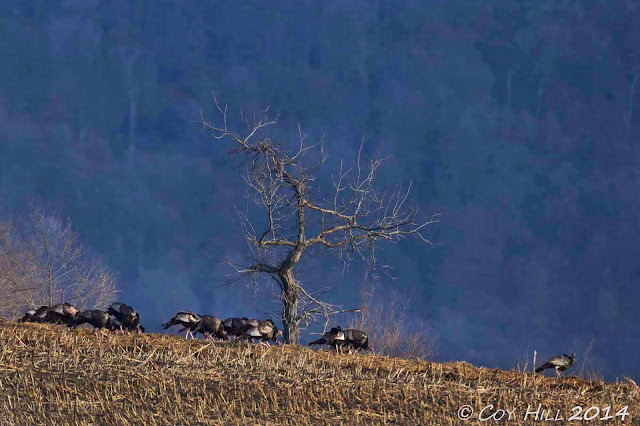 Canon 6D, 600mm lens at approximately 300 yards.
With a strong cold wind whipping about I decided to spend my New Year's eve afternoon indoors.  Before sunset a flock of turkeys appeared on the ridge behind my home feeding in an area of sorghum stubble where the farmer had recently spread cow manure.  This image was shot handheld by resting the heavy lens across the deck rail.  This was to be my last wildlife photo op of the year. 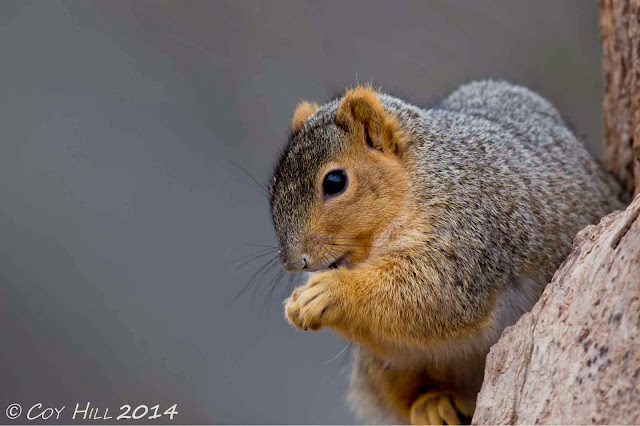 This morning I began another year of wildlife photography when this well acclimated fox squirrel arrived at the feeders.  Using the same outfit described above mounted on the tripod, this shot was made at a distance of about 18 feet.  Whether it is small subjects up close or larger ones at long range the Canon EF 600mm f/4 IS USM Super Telephoto has become my first choice in wildlife lenses whenever portability is not an issue.