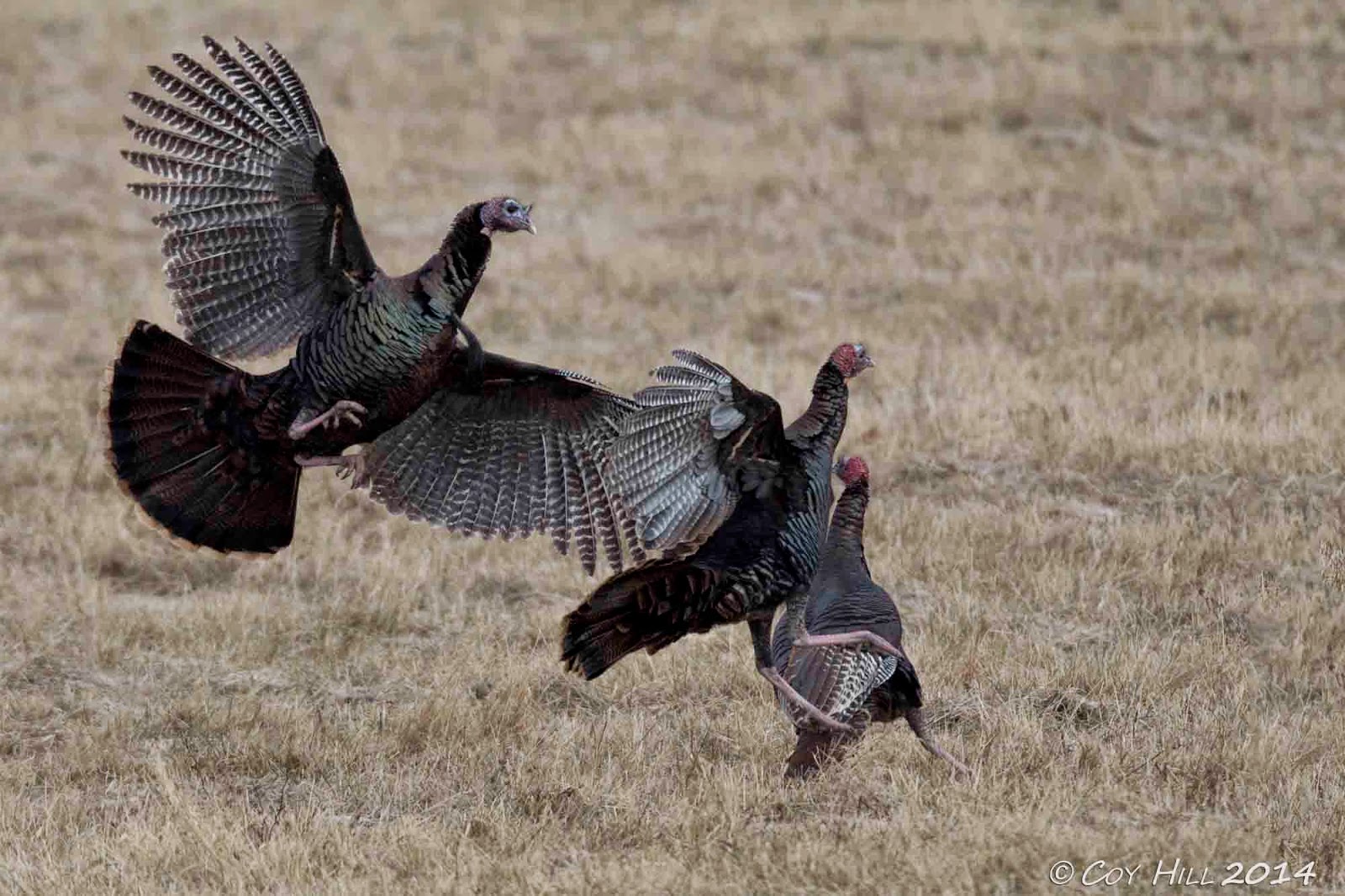 As 2014 drew to a close today I had the opportunity to photograph three wild turkey gobblers as they sparred with one another. 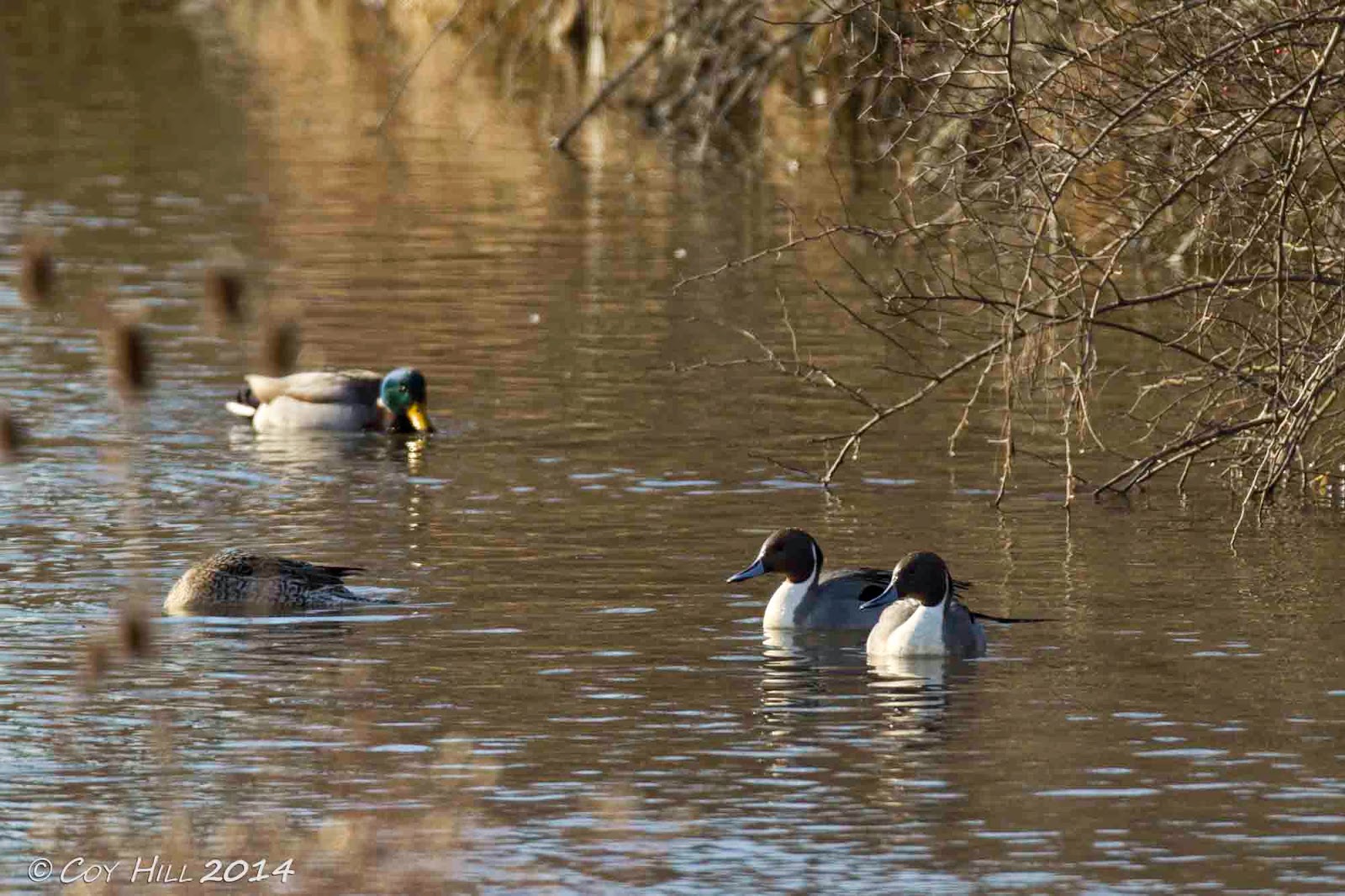 After photographing the turkeys I drove by a stream where I commonly spot mallards during the winter months.  I was surprised to see that a pair of pintail males and one female were feeding with the resident mallards. 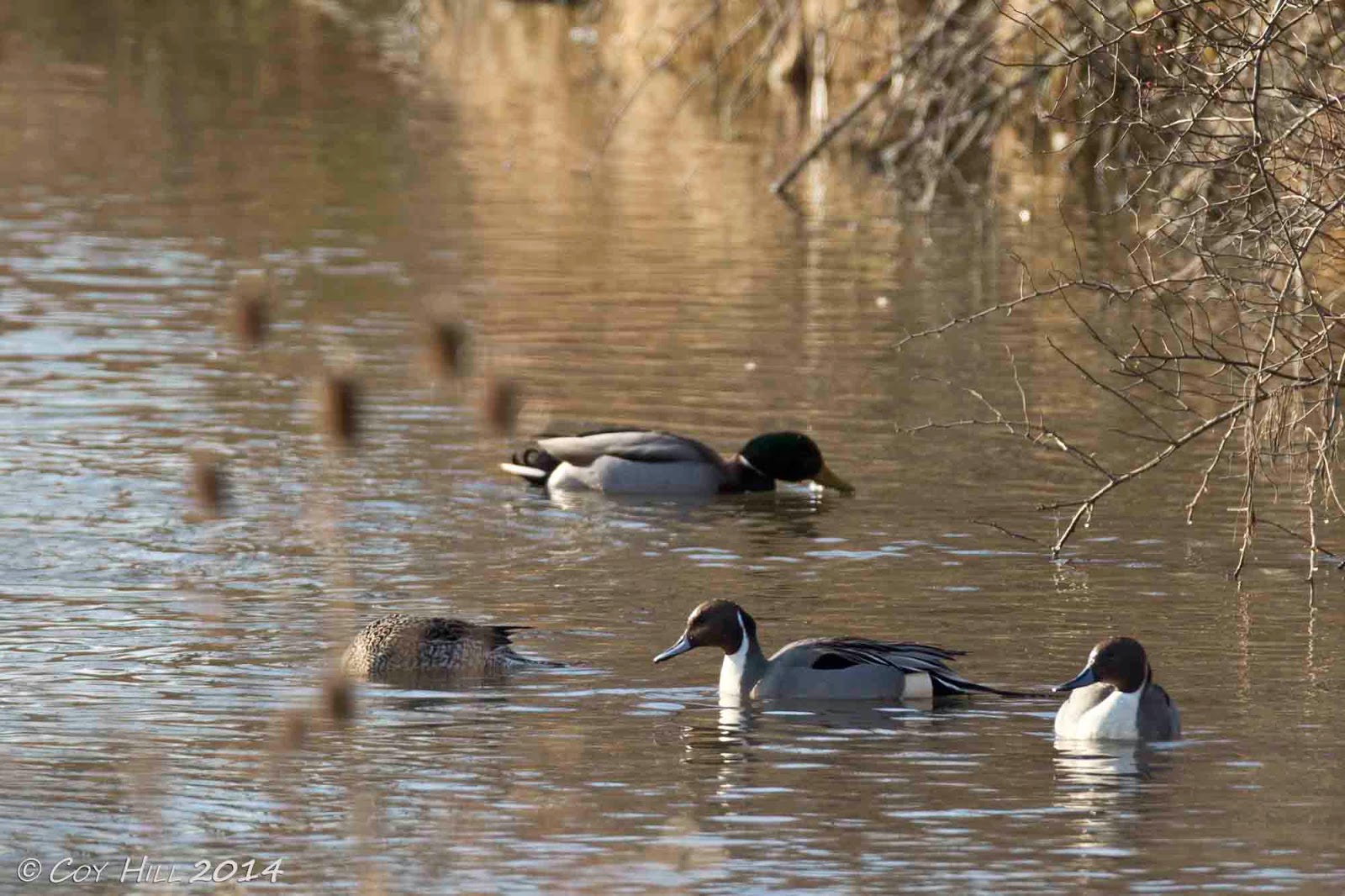 This is the first time I have ever observed pintail ducks in Fulton County Pa!
Wishing you and yours a healthy, prosperous, and Happy New Year!
Posted by Coy Hill at 12/31/2014 07:52:00 PM 3 comments: 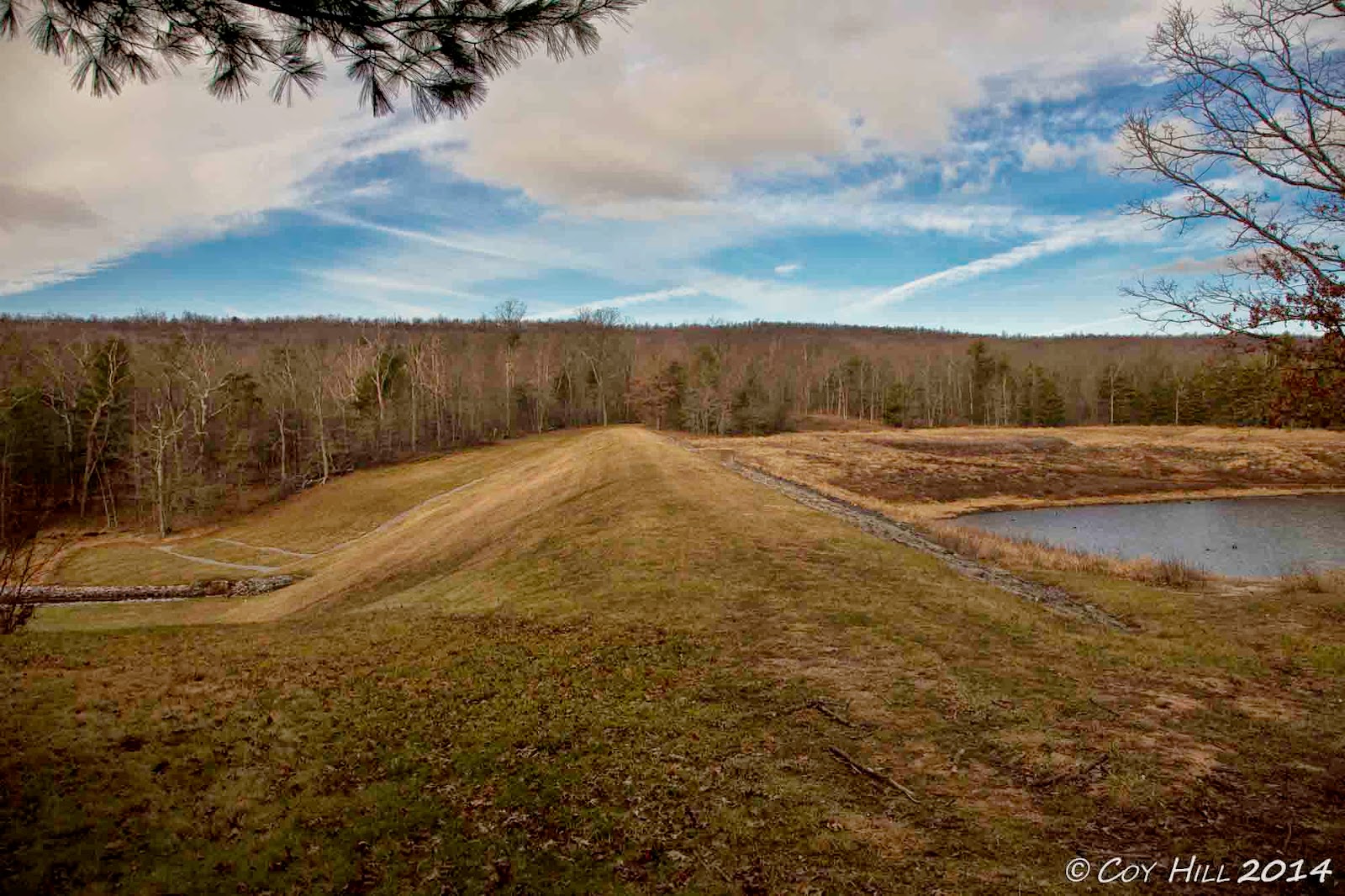 While 2014 was a year of considerable change for me personally, the appearance of the Meadow Grounds Dam remained for the most part unchanged.  The former lake sits empty awaiting funding for the design and repair of the dam and spillway.  This lake that once teamed with fish and was visited by many species of migrating waterfowl is now little more than a 200 acre grassland with a stream running through it. 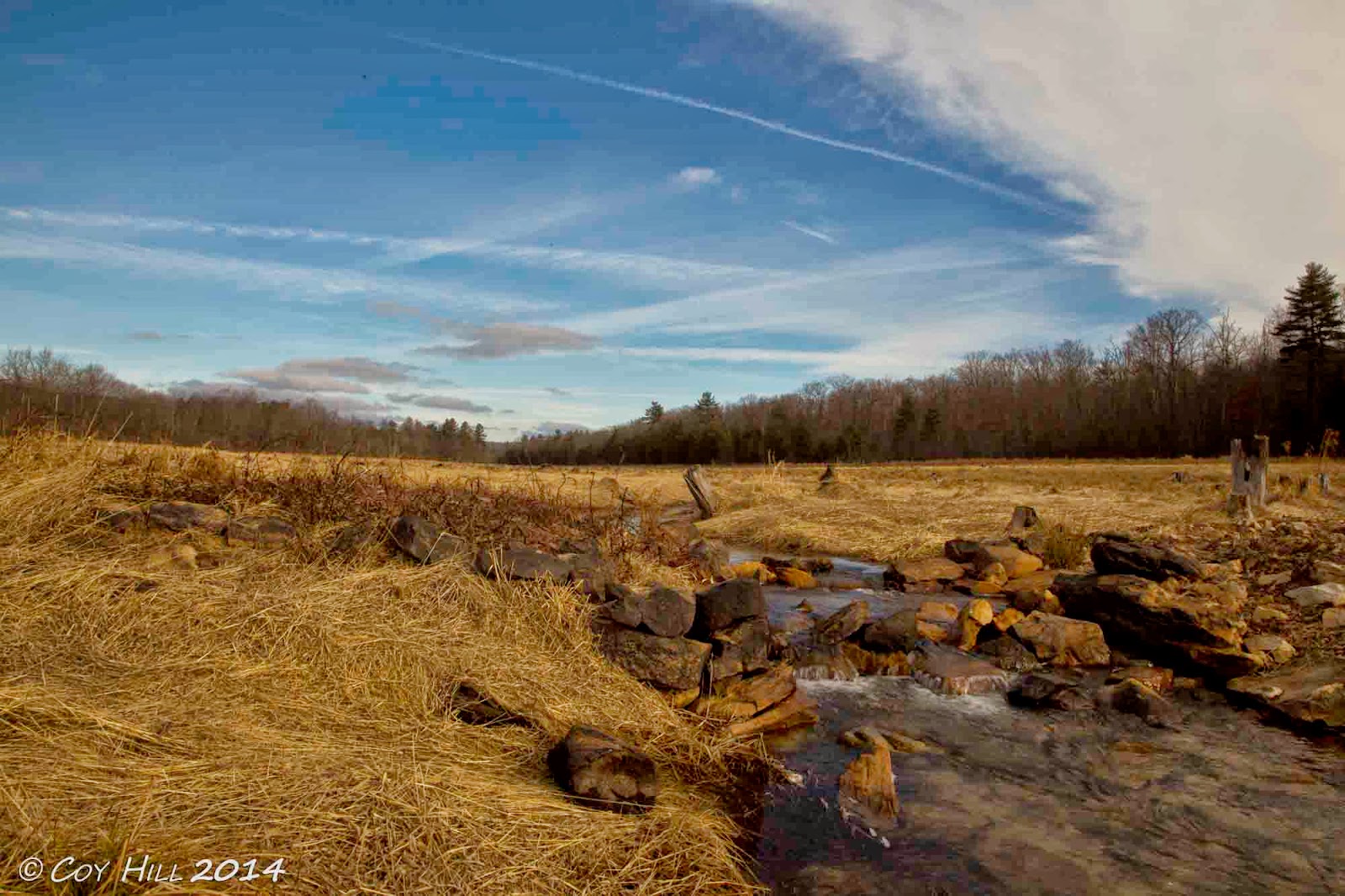 Early on a grassroots organization, Friends Of Meadow Grounds Lake, was formed by concerned locals to exert political pressure and raise awareness to restore the lake to its former state.  Our state politicians recommended that the group raise $100,000 to demonstrate the local community's commitment.  Fundraising began in earnest once the groups 501c3 tax exempt application was approved by the IRS in late August and on November 22nd the goal was surpassed!  With the local funding in place we are now looking to our state senator/s and representatives along with the our newly elected governor to approve the necessary funding to get this project moving.  With our state government facing a 1.9 billion budget shortfall it is questionable when money will be approved. 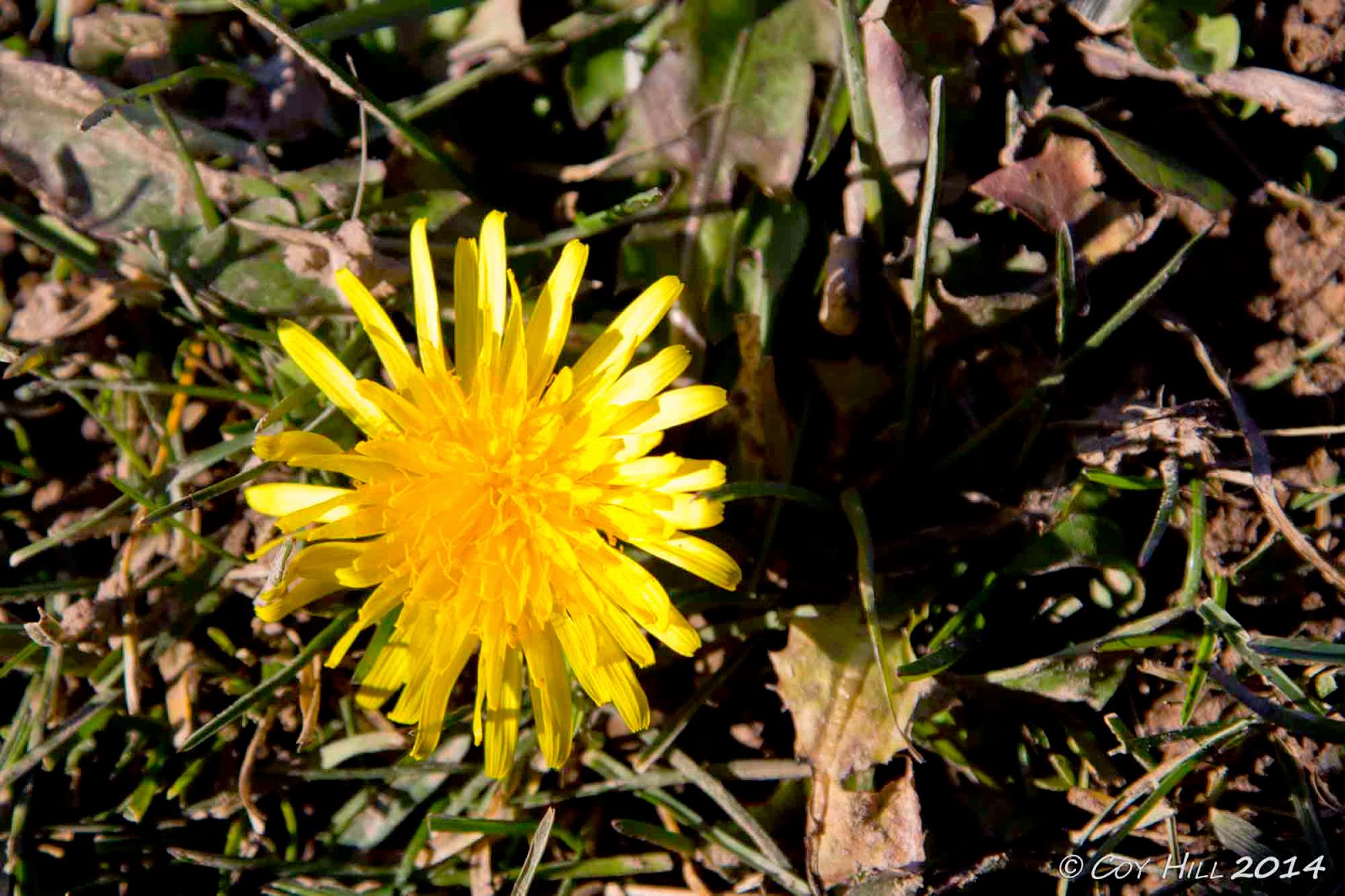 Spotting a dandelion blooming in the pasture today reminded me of how in recent years having dandelions blooming around New Years Day is not uncommon.  I don't remember seeing these during the winter when I was a kid.  Is this a sign of climate change or was I not as observant back then?  I wish I knew! 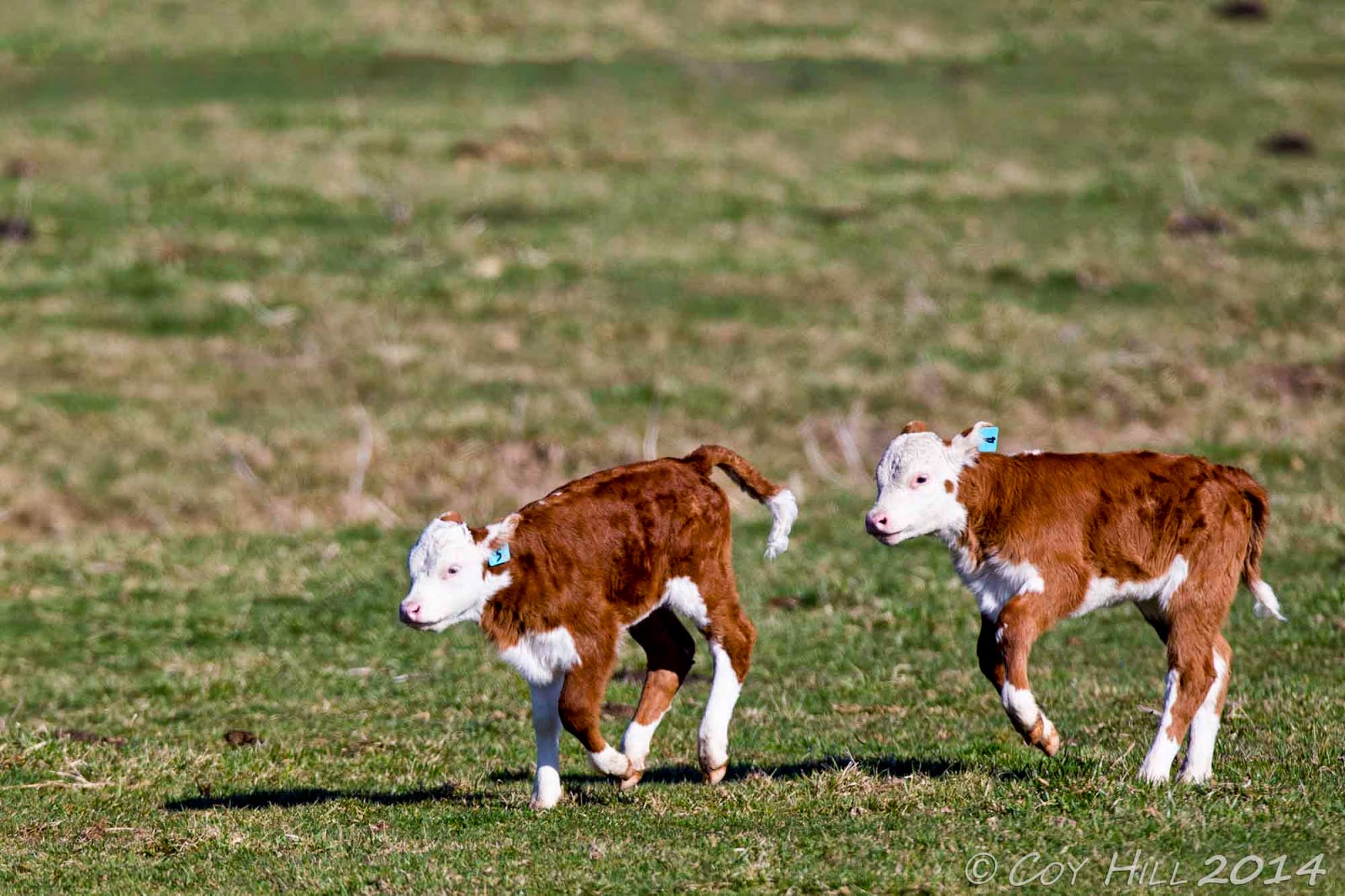 With the passing of my father in February of this year I took on the added responsibilities of managing the cattle on our small family farm.  The above photo was taken in early April as two young calves raced across the pasture. 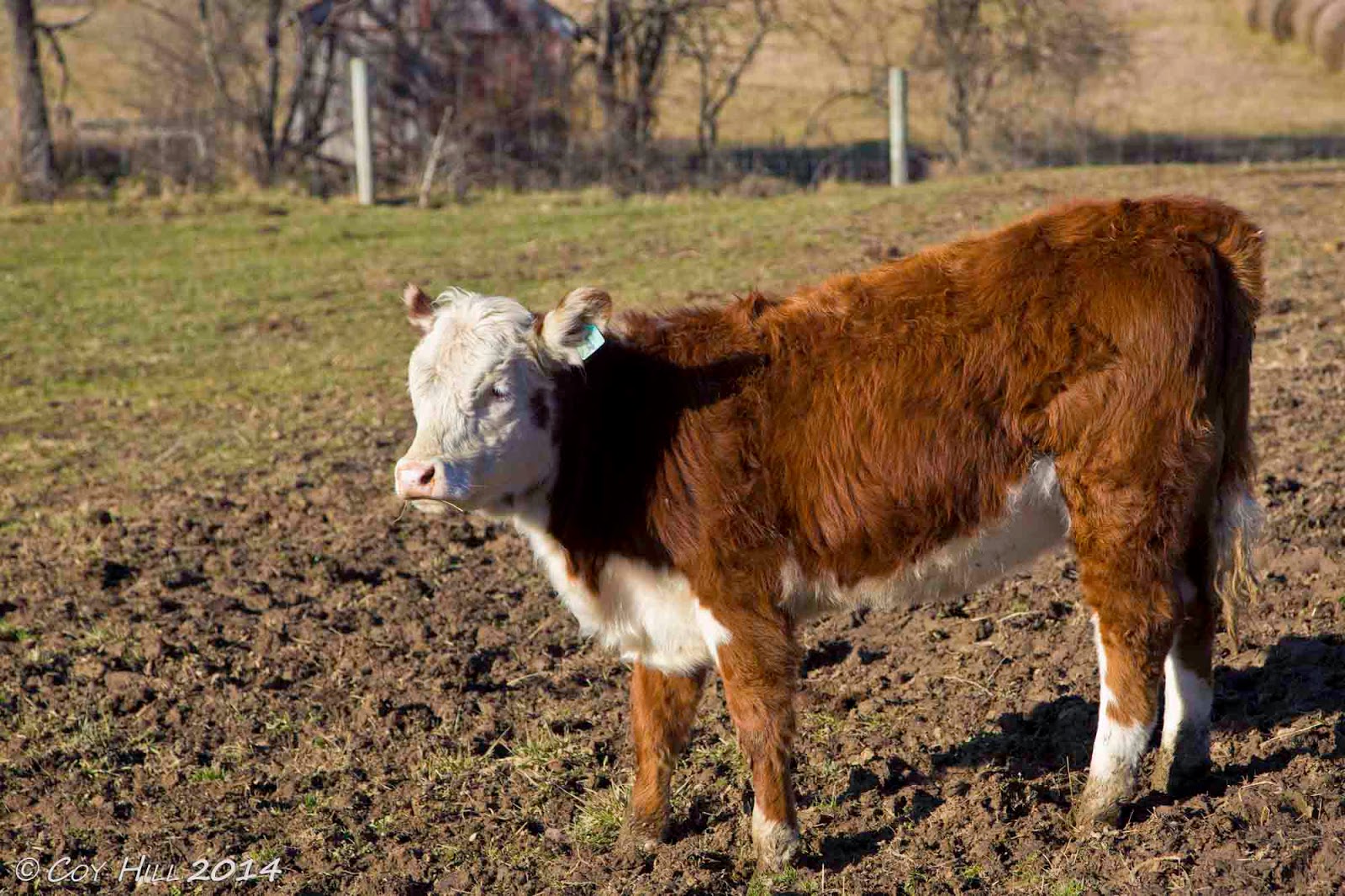 This photo taken today is of the calf bringing up the rear in the previous shot.  Four, as I call her for the number on her ear tag, is on her way to becoming a brood cow while the other calf went to market in early October. 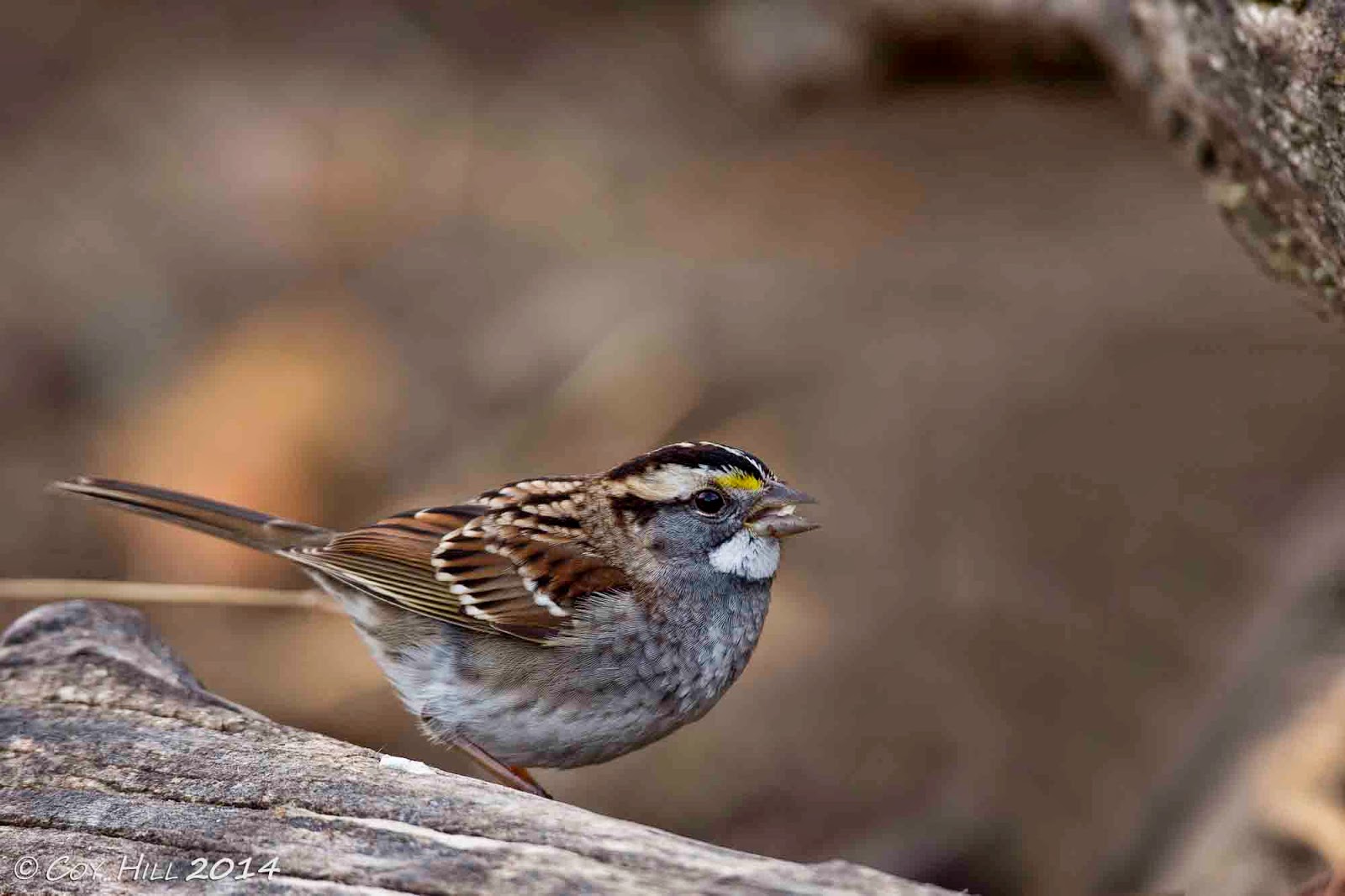 Today I enjoyed spending some time with the camera at the bird feeders and the regular suspects were there to entertain. White Throated Sparrows will seldom get in the feeders but they are always ready to pick up what other birds spill on the ground. 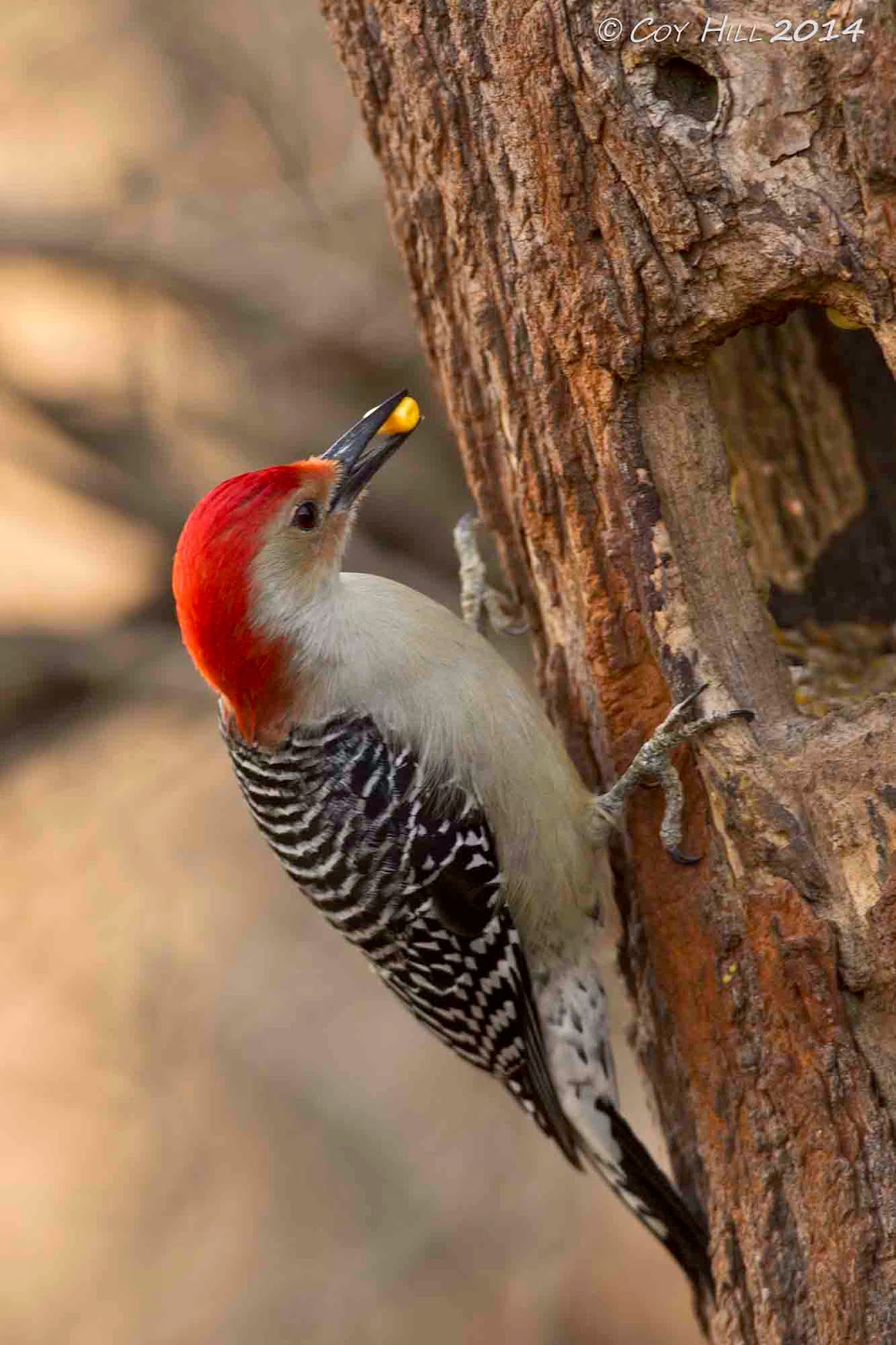 The Red-bellied Woodpeckers don't hesitate to grab whole kernel corn.  They fly to a nearby tree, wedge the kernel in the bark and break it apart with their sharp powerful bill. 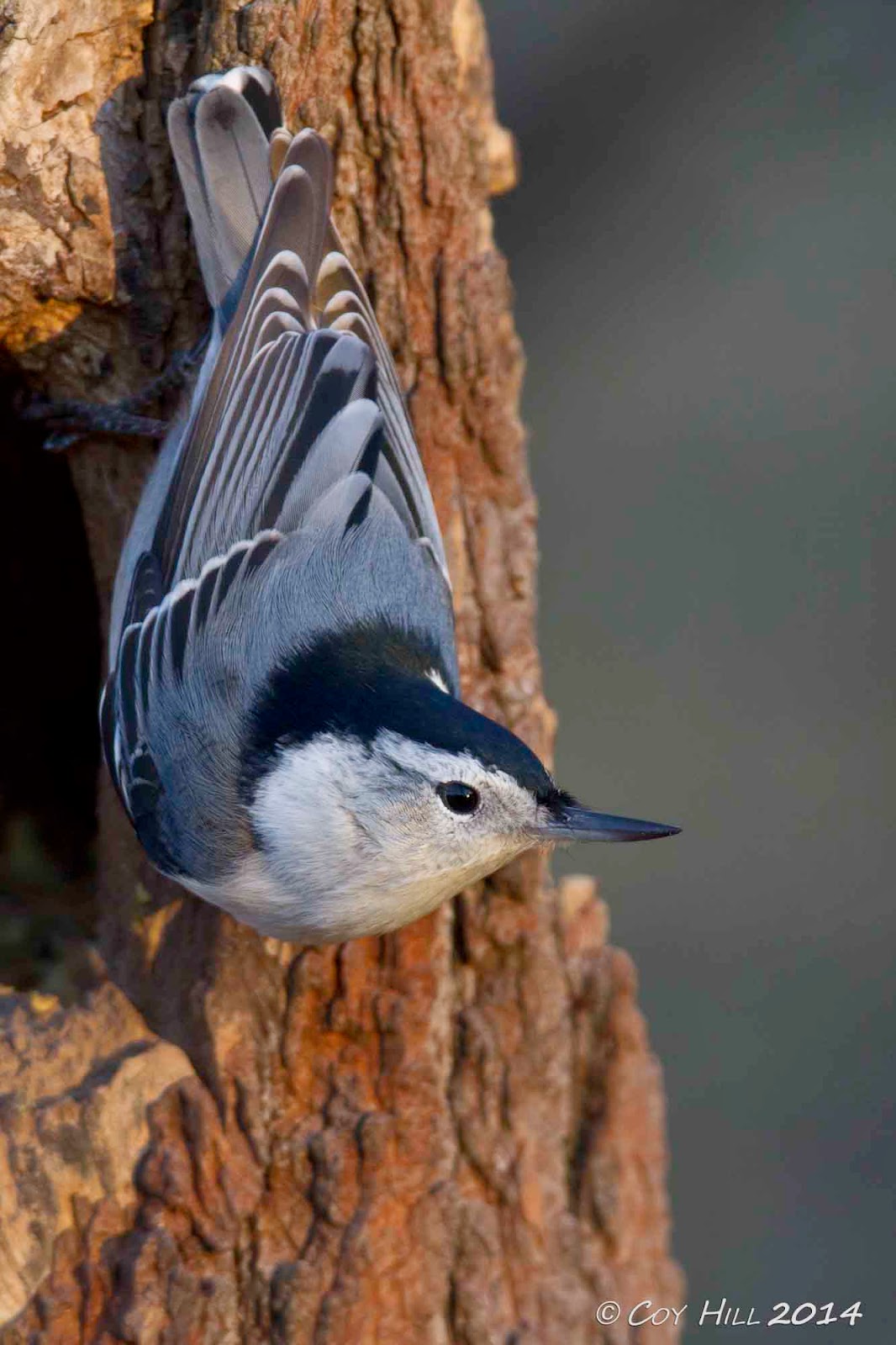 And a White-breasted Nuthatch, cute as ever, poses momentarily before grabbing a sunflower seed and flying away.

I am looking forward to finding more time in the coming year to again pursue my photographic interest and to update this blog on a more regular basis.

Thanks for visiting,
Coy