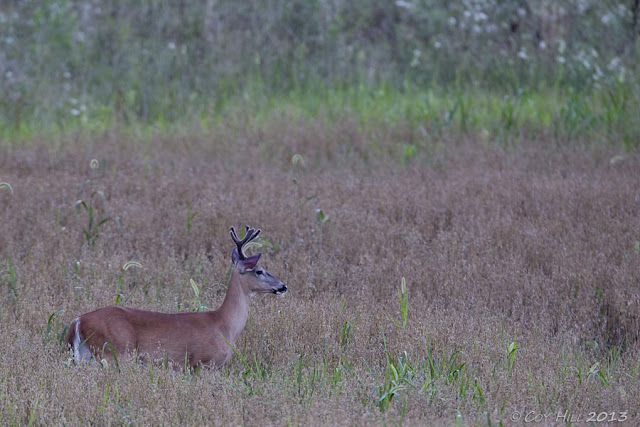 With the oats ripening in the fields the whitetails are taking advantage of the bounty of the season. 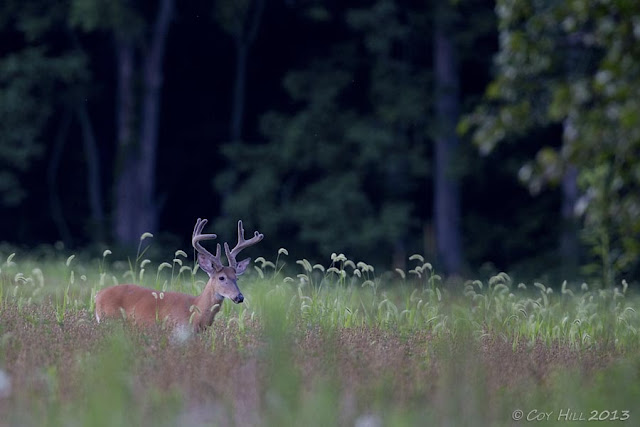 Until harvest and for a short time afterwards fields containing oats are among the best places to find bachelor groups of bucks this time of year. 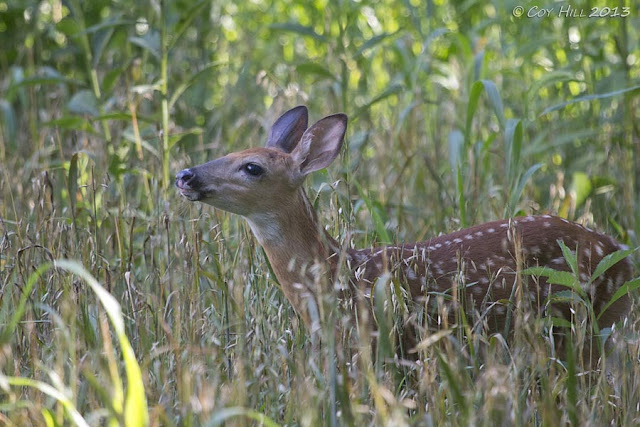 A fawn test the air as it steps from the woodlands into a field of ripening oats. 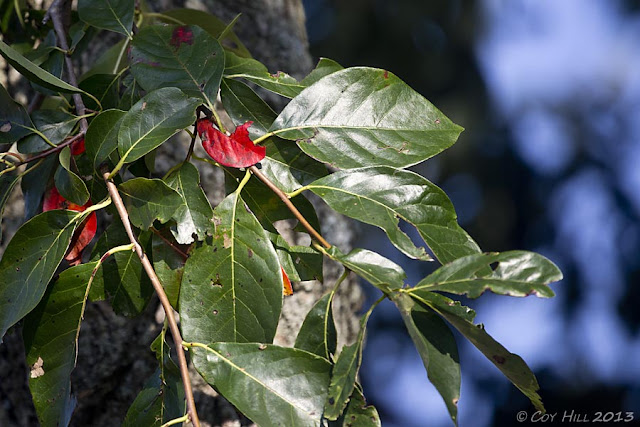 While we are at the midpoint of the summer already some spots of color can be found.  Spots of foliage color such as this reminds one that autumn is just around the corner. 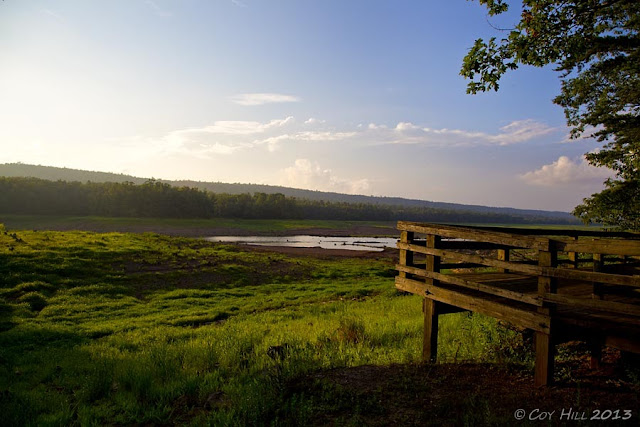 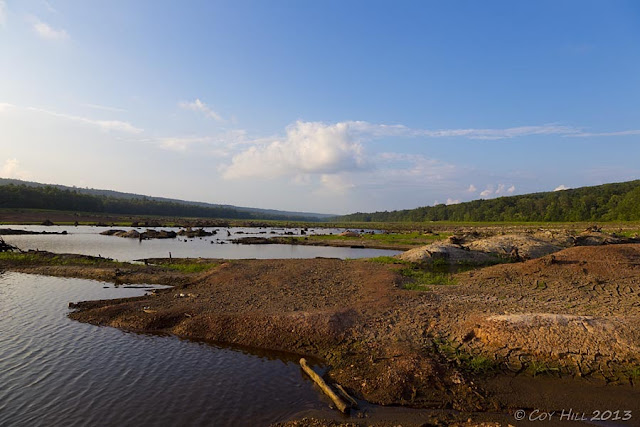 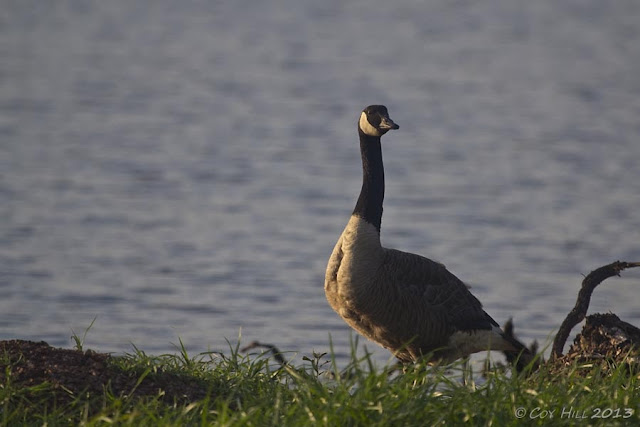 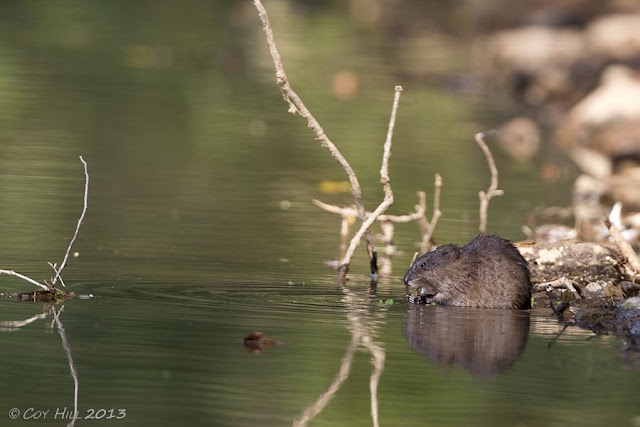 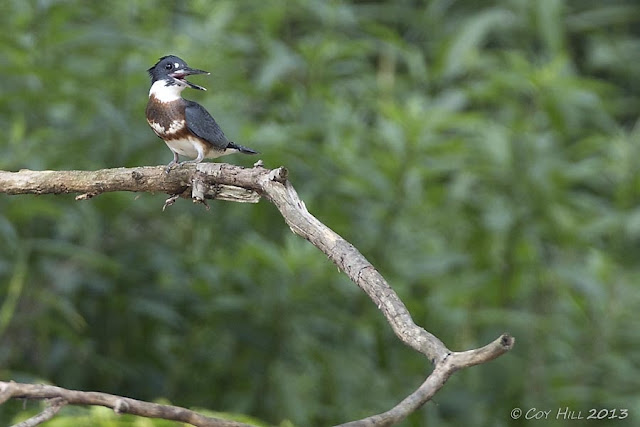 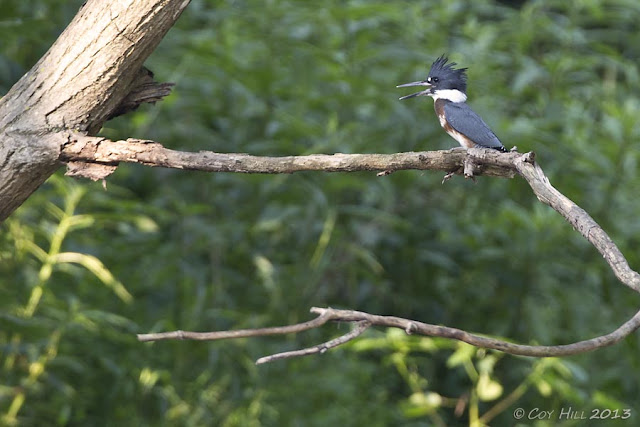 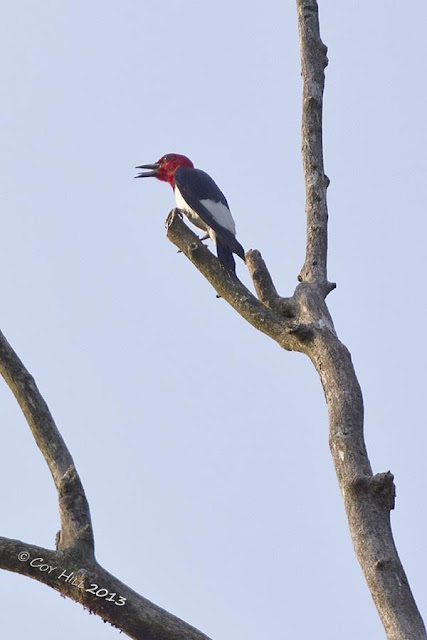 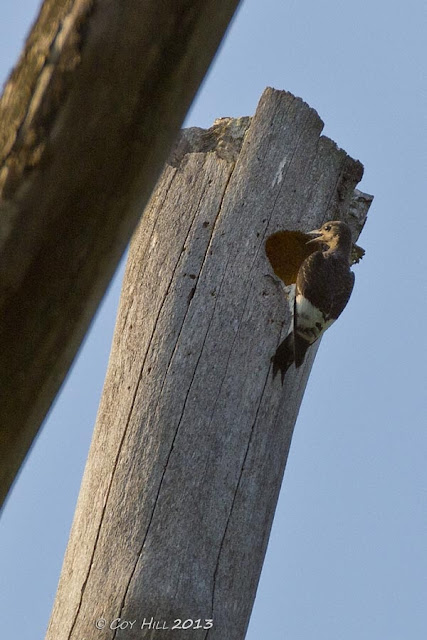 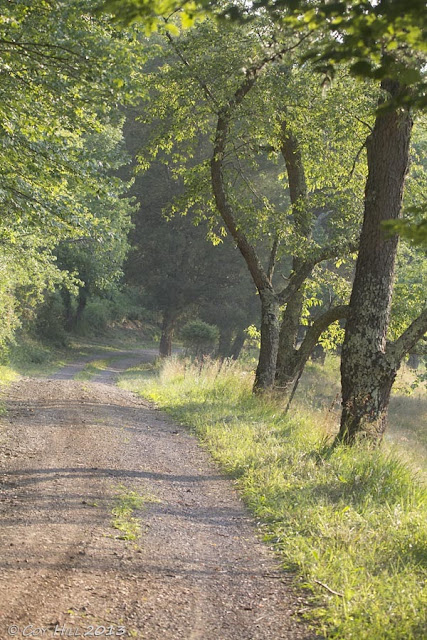 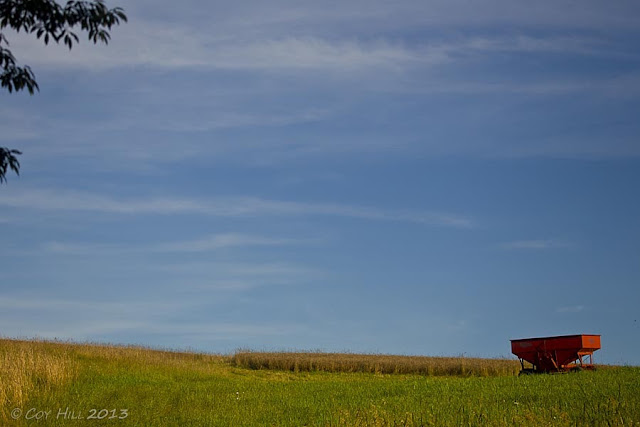 a time of harvest as golden grain ripens in the fields, 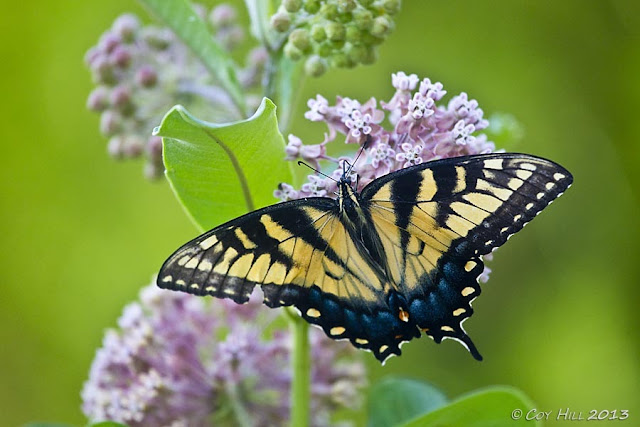 and a time of butterflies flitting about like brightly colored fluttering flowers.

Email ThisBlogThis!Share to TwitterShare to FacebookShare to Pinterest
Labels: summer 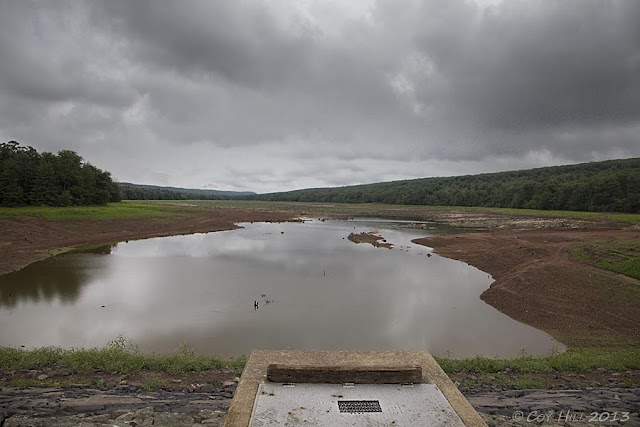 A view from the dam breast shows the fresh green vegetation beginning to cover the former lake bed. 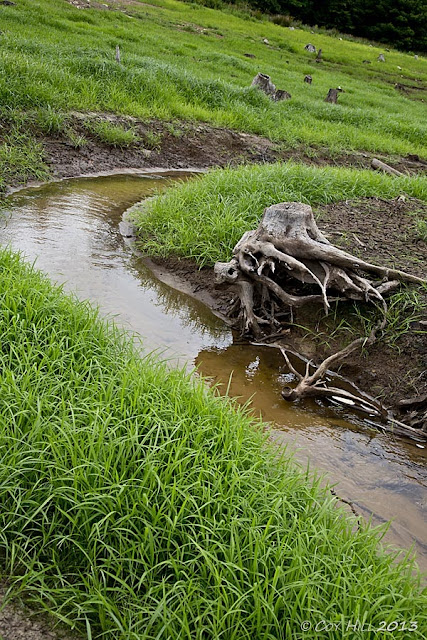 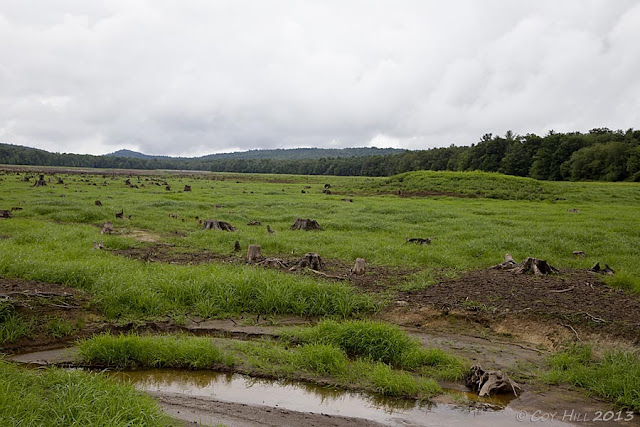 A view looking southward from the northern access point with Roaring Run in the foreground. 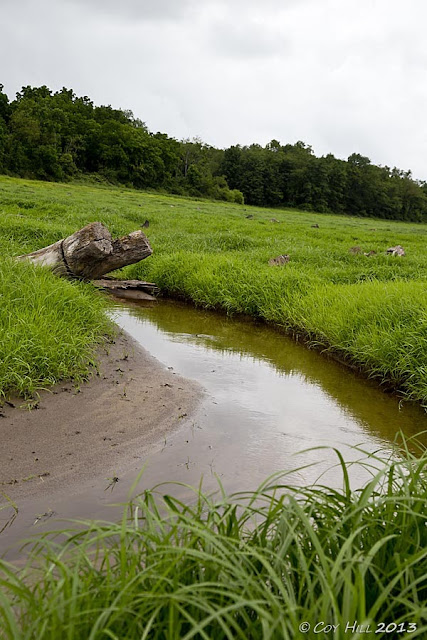 Lush grasses stabilize the soil along the stream.  With the passing of each day the threat of significant erosion and sedimentation of Roaring Run downstream of the dam diminishes. 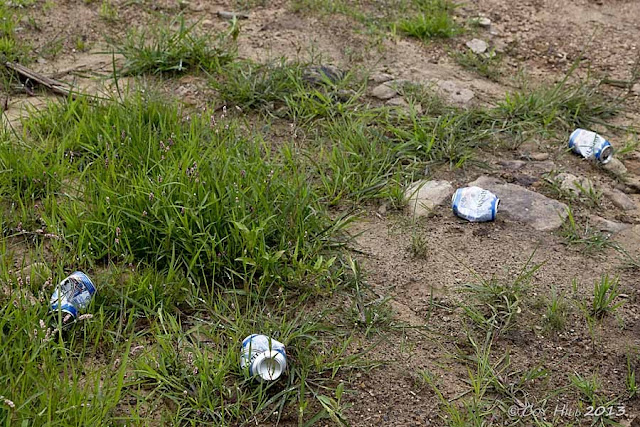 While many of us morn the loss of this Fulton County treasure some visitors show their disdain for our public spaces.  Not only were these beverage cans strewn about but the recently erected sign at the northern access point has been removed and someone had driven into the lake bed cutting large ruts into the soft soil.
Whether one agrees or disagrees with the PFBC decision to drain the lake makes no difference; it is no excuse to vandalize and litter of our public property.

Wild faces come in many shapes and sizes.  Some we recognize as cute and cuddly while others may be seen as being more ominous.
Here is a small collection of Wild Faces I have met recently. 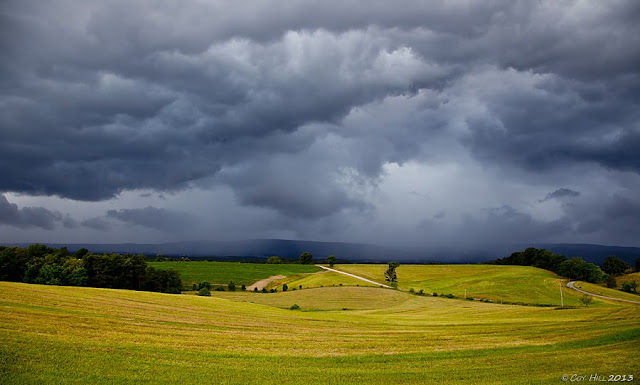 After days of sweltering heat, a thunderstorm approached early this afternoon.  The ominous clouds and the dark mountain in the distance contrasted nicely with the brighter fields in the foreground.

While everyone loves a blue sky day, for the best landscape photography be there when the skies display character.
Posted by Coy Hill at 7/07/2013 06:41:00 PM 7 comments: 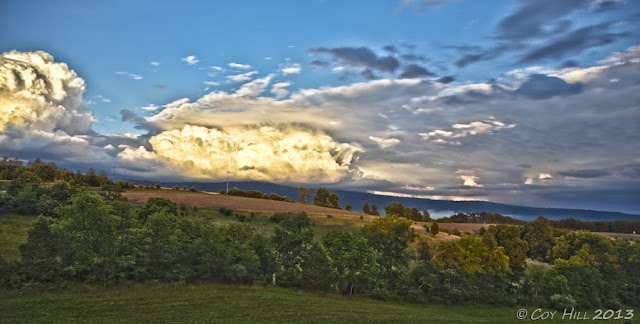 Following an evening thunder shower The white billowy clouds in the eastern sky were spectacular.  This image is a HDR (high dynamic range) compilation of five images. 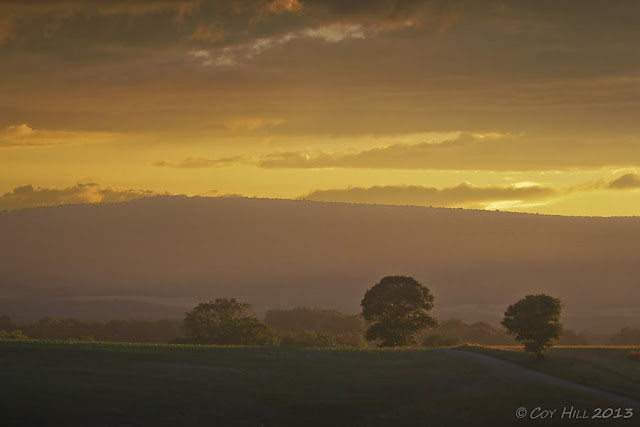 Looking west after another thundershower, the sky took on a beautiful soft yellow glow as the sun sank beneath the horizon.  Not only did the sky glow with the setting sun but the thick humidity enveloping the landscape did as well.
Posted by Coy Hill at 7/06/2013 02:07:00 PM 7 comments:

Photographing the waterfowl migrations this spring was a huge disappointment.  With the draining of the Meadow Grounds Lake I no longer had a body of water near home where I could photograph waterfowl from the boat.
With Raystown Lake the next nearest place to boat in Pennsylvania I spent at least one day each weekend fishing and attempting to photograph waterfowl there only to find that the waterfowl photography in no way compared to working the much smaller Meadow Grounds.  While various species of waterfowl were present for the most part they would flush while I was too far away for good photography.
With the Meadow Grounds out of play what waterfowl photography I did encounter occurred in small wetlands.  With some of the results posted here.
This was the first time I ever observed a wood duck with both wood duck and hooded merganser ducklings in tow.  I expect that the mergansers made it back to the proper mother as I have not observed a mixed flock since.