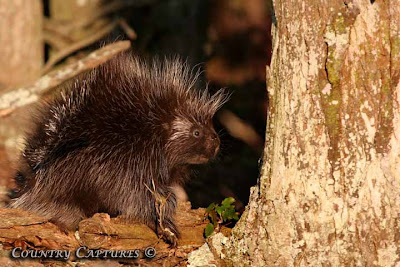 This Porcupine is slowly making its escape after finding that I was not put off by the display of weapons.

A small population of porcupines occupies our area but sightings are quite rare. Encountering one this evening was definitely a special treat.

As the porcupine is a slow moving critter, catching up to it was not difficult as it moved along the wood edge. Photographing it was an entirely different matter. For quite some time the porcupine maintained a defensive posture.

In case you are not familiar with the defensive posture of the porcupine allow me to describe it. Quills raised, butt pointed towards the danger, head held low and turned only enough to allow them to keep visual track of the position of the intruder, not a position that lends itself to quality images.

After some time the porcupine tired of the game and moved off towards the nearest tree. Soon it was safely out of reach of danger high in the uppermost branches but not before I had captured the image displayed above.

Ahhhhhh,, so cute... I have never seen a real porcupine... Great post and a wonderful shot.. :)

They are even more rare around here. I don't know of any being seen for years. It would be a treat to see one and to get a photo would be special. I like your photo and I hope the little guy makes it in life.

I have never seen one of these "in the wild" either. A fabulous capture, Salty!

Salty: I've seen them in a tree while deer hunting and it's fun to see them on the ground.

A true cuntry capture for sure Salty. :0)

Great picture. It looks so cuddly. God for it that it is not cuddy!

I have never seen one in the wid before. Thanks for sharing. Its a fascinating creature with those sharp quills.

Your caption is perfect for today's photo. Never have seen a porcupine - they look smaller than I thought but stil handsome.

Cute little guy...but I won't touch, for sure!