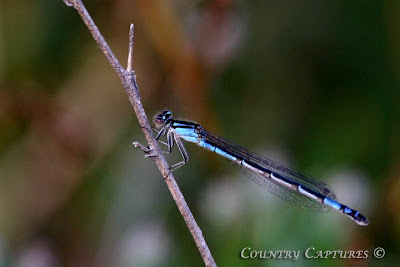 Even as a kid I enjoyed watching Damselflies flitting around. Few if any creature is more agile. Their coordination is simple amazing; controlling four wings as they fly at relatively high speed, stopping instantly and hovering in mid-air for extended periods of time and then darting off in seemingly any direction going from zero to top speed in the blink of an eye.

This little Damselfly surprised me as I was photographing wildflowers and butterflies. I was not expecting to see a Damselfly as I was quite some distance from water when it appeared and perched upon this dead weed.

The flight of the damselfly reminds me of that of a helicopter. I have only once had the opportunity to ride in a helicopter. That was over two decades ago but the memory remains fresh. This was the first time I had ever flown and the bird was a two-seat crop-duster with a little clear bubble cockpit. I felt as if I could see all of creation from our vantage point above the West Virginia farm land. At one point the pilot told me we were traveling at 50MPH and a short time later he stated that we were sitting still, I could tell no difference.
Since then I have flown in fixed wing aircraft many times but no flight has been more memorable than that first time in the air. ............Flying like a Damselfly.
Posted by Coy Hill at 7/20/2008 07:20:00 PM

Salty: I was thinking of a helicopter when you started to decribe the flight. That is a beautiful photo for certain.

Oh, I love your story! Nice shot of the damselfly too! As a kid I was always SCARED of these guys....but now I LOVE them and can't get enough of seeing them.

That is a great macro shot! It has been a crazy weekend. But I am back. Have a great day!

Great story to go along with an amazing shot. I have not heard nor seen one of these.. I love the background and the Damselfly (sp) is sooooo sharp. WOW... :)

Great picture and post,
This is a great one for me Salty, first I love the dragonflies even if I have not got a decent picture of them, then the referance to your helicoptor. I don't fly.. I have been in an aeroplane once and I'll never ever do it again.. hate it. Yet I have been in helicoptors, thay are more open than fixed wings planes, they lean when turning something like a motorbike, and the feeling of speed is great. I would get into one anytime. Strange I must be.. ha!