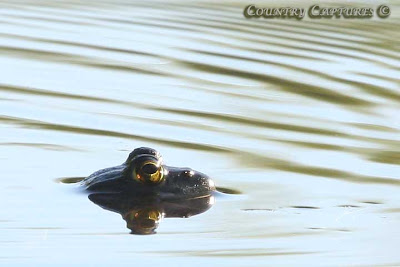 The Bullfrog silently surfaced while I was watching over a portion of the Haines-Seville. Slowly I swiveled the camera. After allowing me to fire a few images, with a kick of its strong legs the frog disappeared beneath the surface.

The frog was lucky that it was I who was near when it surfaced rather than the heron. Otherwise what began as a pleasant summer morning would have turned deadly.

Email ThisBlogThis!Share to TwitterShare to FacebookShare to Pinterest
Labels: wetlands

I found you through Rich's site. Great capture on the frog. You have some really nice wildlife images here. I'll check back. I too used to shoot minolta and now I shoot a canon.
Cheers

Wonderful shot of the frog.

The way of the wild, maybe you get used to it, but I do not think I want to watch it. It's fine if it doesn't happen in front of me. I cannot even handle it when the cats catch a mouse when I am around.

Cool image and true post. Those animals just go about their business.

Lucky indeed! I love the reflection. The waves look like silk.

Fabulous capture....and the ripples in the water are awesome.

Salty: Another great shot from the wetlands of the frog. It is really a neat capture.

I can feel the silence and the early morning peacefulness of the wetlands. The ripples do look like silk.
I guess you could really say I like this shot.

great catch of the frog.

Excellent.... and the green Heron in the posting below is another true 'county capture classic'