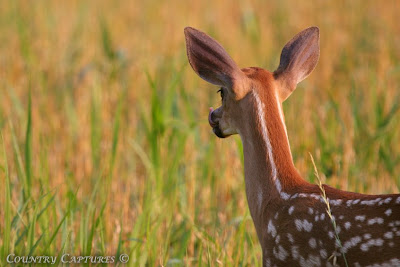 I don’t know what caught this little fawn’s attention but it must be Lip Licking Good!

Donald Kinney and Faye Pekas in comments on my previous post both correctly assumed that I had captured the image with the 100-400mm L lens. I use this lens to capture nearly all of my wildlife photographs.

Upon desiring to upgrade to my first DSLR, naturally I turned to my local resident “Expert”, my brother Willard. Willard has built a dream collection of Canon equipment over the years and when he speaks, I listen. His first advice was for me to learn from his mistakes. In years past he had worked with numerous lenses. As he continued to strive to improve his craft he found himself replacing those lenses with lenses of higher quality. Willard stated that if I were to begin with Canon L lenses then although the initial outlay would be greater, in the end they would be a bargain. With his advice in mind I chose the 24-105mm L for my primary lens and have not been disappointed.

Soon I began investigating a higher powered telephoto for wildlife work. Willard was kind enough to allow me to shoot with his various lenses and even gave me his EF 100-400mm L on indefinite loan last autumn. Many other lenses in Canon’s lineup out-perform the 100-400 in certain aspects, for example the primes offer greater sharpness and larger apertures.

The versatility and price of the 100-400mm L finally decided the issue for me. This lens gives acceptable sharpness while combines 400mm power in a very portable package along with good image stabilization. I find that not only does it work well on the tripod but it also works very well for my run-and-gun style of waterfowl shooting. It work well on distant subjects and with its 1.6m macro focus distance it does yeoman’s duty on small wary subjects such as butterflies, dragonflies etc.

At the moment I can only think of three negative aspects of this lens and frankly I consider these minor.

This isn’t a sales pitch for Canon; it is my personal thoughts and observations about a product whose performance meets my expectations.

Exellent captures Salty. I agree with you on the Cannon 100-400 L, almost all of my photo's are shot with this lens.

And the Image Stability with that lens would be heaven for me since I rarely use a tripod.

I love this lip-licking fawn :)

Oh, this is FANTASTIC! I have never seen a fawn like her lips before!! Great shot!!

You continue to amaze me with your nature photography. What a cute, cute capture!! You're so lucky to be around these sweet things. Very Nice!!

Dogs and Deer are my favorite animals - and I collect deer items. Therefore, I'm drooling over your fawn photos - they are so beautiful!

A nice picture, and I have lens envy with about every photography blog I check, so the rest, I'm going to pretend I didn't hear!

I also have been thinking about expanding into higher telephoto lenses, but with the cost of some of the Canon lenses, I have to settle for a bit less. I ordered the 55-250mm f4-5.6 with image stabilization. It is in a cheaper plastic body, but seems to have good optics. I have a Canon D30, which has a 1.6x sensor conversion, so it like an 88-400mm.

For more info on the lens, go to

for a good review.

I have a canon and appreciated your information very much.

I love the fawn's ears in this pic!

Wonderful photo as is; when enlarged it is delightful. I love that little curled tongue. Well done!

Also, thanks for the information on lenses. I don't use a Canon, but your advice about lenses is right on.

Salty: Love the picture and really enjoyed the post. I'm trying to decide on what to do, camera wise. I love my little Canon Powershot but your pictures leave me drooling for a new camera, at times. The world of photography is so complicated that all advice from users whom you trust helps so much.

I really love this picture. Never saw anyone photograph the back of a fawn's head before. It's beautiful.

Terrific shot of the lip licking fawn and my goodness those really are some eyelashes.

Hi Salty.. great new header.. and great pictures .. but looking at the posts I've missed and I'm in awe.... the heron shot is a stunner,

I pretty much echo what your brother told you about the L lenses. I got some one really good zoom lens 7-200mm f4 but wish I had a 400. I will have to investigate your 100-400 and see what the current prices are.

You take some really nice photographs.