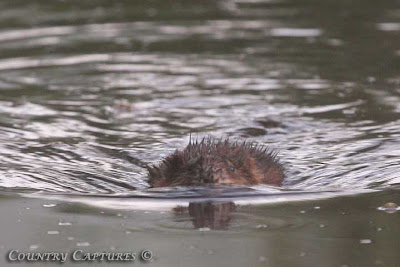 Muskrats were once a common sight in the creek I grew up along. Their den holes perforated the muddy banks of the stream. With the passing of hurricane Agnes in 1972, heavy flooding occurred in our area and the large muskrat population was no more. Only a remnant population remains.

This morning I arrived at the Haines-Seville Wetland at first light. Soon after setting up a muskrat swam past my hide but there was insufficient light for photography. As much as it pleased me to see a creature that I had not seen in many years, I was disappointed that the chance for an image had passed me by.

A little later my heart skipped a beat when I noticed that a second muskrat was swimming towards me. I was determined to not allow this second chance to pass me by. With the camera set on ISO 800 and the 100-400mm on its widest aperture I began composing and firing as rapidly as possible.
For more Camera Critters and to join in on the fun visit our gracious host Misty at her Camera Critters blog

Wonderful! Your giddyness is oozing through my computer!

It is a wonderful photo! It looks like you were right in the water with it while taking the picture. Nice reflection too!

Have a wonderful weekend!
My Camera Critters Here and Here

How exciting. What a thrill to get that unexpected shot. Good job Salty.

So glad you got it! Patience does pay off.

Love the rippled water as well.

I'm glad you got a second chance. Very cute.

i love this shot!

What a great capture

You got a great shot! I've seen quite a few around here, but have never been able to photograph one. Not fast enough.

Absolutely fantastic. I love the way his nose is just peeking out of the water. Great capture and hopefully the population is growing again.

How cool to have two muskrats swim by! You must have a guardian angel sitting on your shoulder.

So sweet a catch. Great timing.

What a wonderful picture. We have muskrats here in our over flow " pond" from French Creek. They make such good photo subjects.

Great capture Salty! He (or she) looks like he's on a mission!

wonderful photo adn equally as exciting you saw them

Here, when we first moved in we had many trappers that asked permission to trap the muskrats...now and for some time Pelts of that animal do not command the $

WE see them from time to time, and for sure their holes aroudn our farm pond as well as the creek...

I learned a lot from those trappers 20 odd years ago, they seemed dedicated to theri trapping with dignity for the animal as well...

Agnes sure did change a lot of things in PA, Salty! You sure did get a good shot of this little bugger.

Awesome capture Salty! We've got a few of these critters back at our pond if ya wanna come on over ;-)

Salty: This is a great capture of the muskrat head on. I was lucky enough to see on earlier in the year.