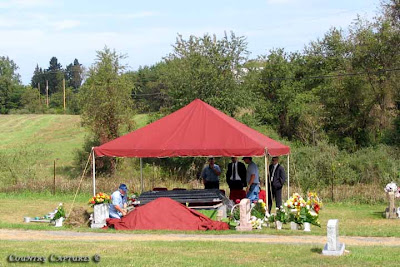 Yesterday in a little country graveyard, Willard and I bade our old friend and neighbor Dale farewell for the final time.

Dale lost his battle with cancer, the only battle I have ever known him to loose. To say he was a fighter would be an understatement as Dale was never happier than when he had a good feud going with someone.

Dale was money poor and land rich. Dale didn’t have much education but was one of the most cunning men I have ever known. Farming a hard scrabble farm, driving school bus, cutting timber, and maintaining our local township roads kept the bills paid and the fields, forest, and streams kept food on his table. Dale was oft times blamed for killing a lot of deer on his properties but as he would accurately point out, if that were so then why were there more deer there than on most surrounding lands? The source of many of these rumors were started by people jealous of the fact that he owned the land and absolutely would not allow them to set foot on it for any reason.

When one owns property in a rural area where wildlife abounds they can be certain that it will attract a class of person whose only desire is to destroy it. Dale was always on guard for these types. His motto was that when they pushed you, shove back. Shove back and shove hard!

Oh dear Salty what a loss you both share
Many that do not Have PAPER Education are just as Brilliant as those that do and OFT is the case More so…so I have found in some instances
Dale sounds like he blessed your lives. You are indeed lucky to have had him in your life as I am sure his memories will live on with you all

What a Legacy this man has given many

I'm sorry for the loss of your friend Dale. He sounded like he was a very good man. The education that really counts is what we learn as we live...

I love a story of a good fighter. So horrible when battles come up that no one could win.

Salty: The loss of a friend is really hard and I am sorry for your greif. Remember him in his stronger days. I'm sure that is the way he would want to be honored. I lost my Dad to Cancer and he was strong willed like Dale and fought it to the end.

I am sorry for your loss.

Its hard to loose someone that fought so hard to win. Wonderful tribute to a man that meant so much to you and the community.

Dale sounds like a very colorful guy! I'm sure you will miss him. Perhaps he has found more sparing partners in his life beyond.

Hi Salty....
I was really moved by this posting and felt sad for this mans passing. You have show high regard in this tribute...
Tom