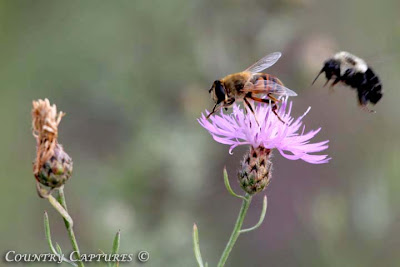 While shooting this Hover Fly I suddenly noticed it quickly run across the bloom and took flight as a Bumble Bee took its place searching for nectar. I didn’t realize until I reviewed the shots later that I had actually caught the bumble bee approaching and scaring the Hover Fly away.

This shot as well as many other of my insect shots was captured in an overgrown area where Penn Dot once had a small depot. After moving out a few years ago the weeds have slowly taken over.

What appears to be an eyesore from a short distance away is a vibrant community of wildflowers and interesting insects. Often the best habitat we can provide wildlife is to simply allow some land to revert with no further intervention on our part.
Posted by Coy Hill at 9/01/2008 08:29:00 PM

Salty: It's wonderful when you capture more then expected. I would have thought that was a bee.

Fantastic. You were fortunate. This is awesome!!
Mountain Retreat

great catch of the bees. Looks like they are waiting in line.

Nice shot, Salty. That must be a thistle?

Super shot! I love being surprised at what I find in a picture I've taken.

Nice shot, Coy. I am not too crazy about "bug" shots, but the flower, OK, weed, makes it perfect. Toally agree with allowing some land to return to it's natural state.

I love the way you caught the bumble bee coming in for a landing. Really super shot Salty.

Great shot Coy..I thought you were going to say that the bee attacked the fly. Come to think of it, I haven't seen one bumble bee this summer. Other kinds of bees, but not a bumble bee. That can't be good..

Oh I agree. I was just telling my sister the other day when I see those signs that say "10 acres land for sale" (or how ever many acres) that I wish I had the money to just buy it and leave it as it is...